It’s time to celebrate in Finland! The demolition of the first dam on the Hiitolanjoki River will help endangered migratory fish.

In August-September 2021, the Kangaskoski dam on the Hiitolanjoki River in South Karelia, Finland was demolished. The river Hiitolanjoki runs from Finland to Russian Lake Ladoga. The removal of the lowermost barrier will help endangered migratory fish such as Ladoga land-locked salmon and brown trout by revealing spawning habitats on the Finnish side of the border, which were beyond their reach for a century. This victory is thanks to a wide range of actors who have worked for decades to liberate the wild rapids at the Hiitolanjoki River. Regional fisheries authorities played a crucial role when they launched an official process to claim fish ladders to be built to all three hydropower plants on the Finnish side. This triggered the opportunity for the dam removals.

The three hydropower plants in River Hiitolanjoki were bought off between 2017 and 2019, after which the planning for their removal started. The hydropower production at the lowermost dam, Kangaskoski, ended at the end of July 2021. The preparation for the demolition of the dam, just a few hundred meters from the Russian border, began immediately afterwards in accordance with the terms of the permit issued by the Regional State Administrative Agency of Southern Finland. The dam of the Kangaskoski power plant has now been fully dismantled and the rapids are open to migratory fish!

“There has been an enormous amount of work over a long period of time to liberate the river, and now is the time to celebrate,” says Hanna Ollikainen, CEO of the South Karelia Recreation Area Association.

“Migratory fish require running water habitats such as rivers or streams, for their reproduction. As juveniles they begin their migration to the sea or lakes to grow and eventually return to their place of birth to reproduce. Finnish migratory fish are endangered, and the reason for their plight is simple: man-made dams, culverts, and other obstacles block the fish’s routes to their breeding grounds. The good news is that fish populations can be restored relatively quickly through measures such as dam removal. Hiitolanjoki is an excellent example of this important work, and we are very proud to have a brand new salmon river in Finland” says Sampsa Vilhunen, WWF Finland’s Program Director. 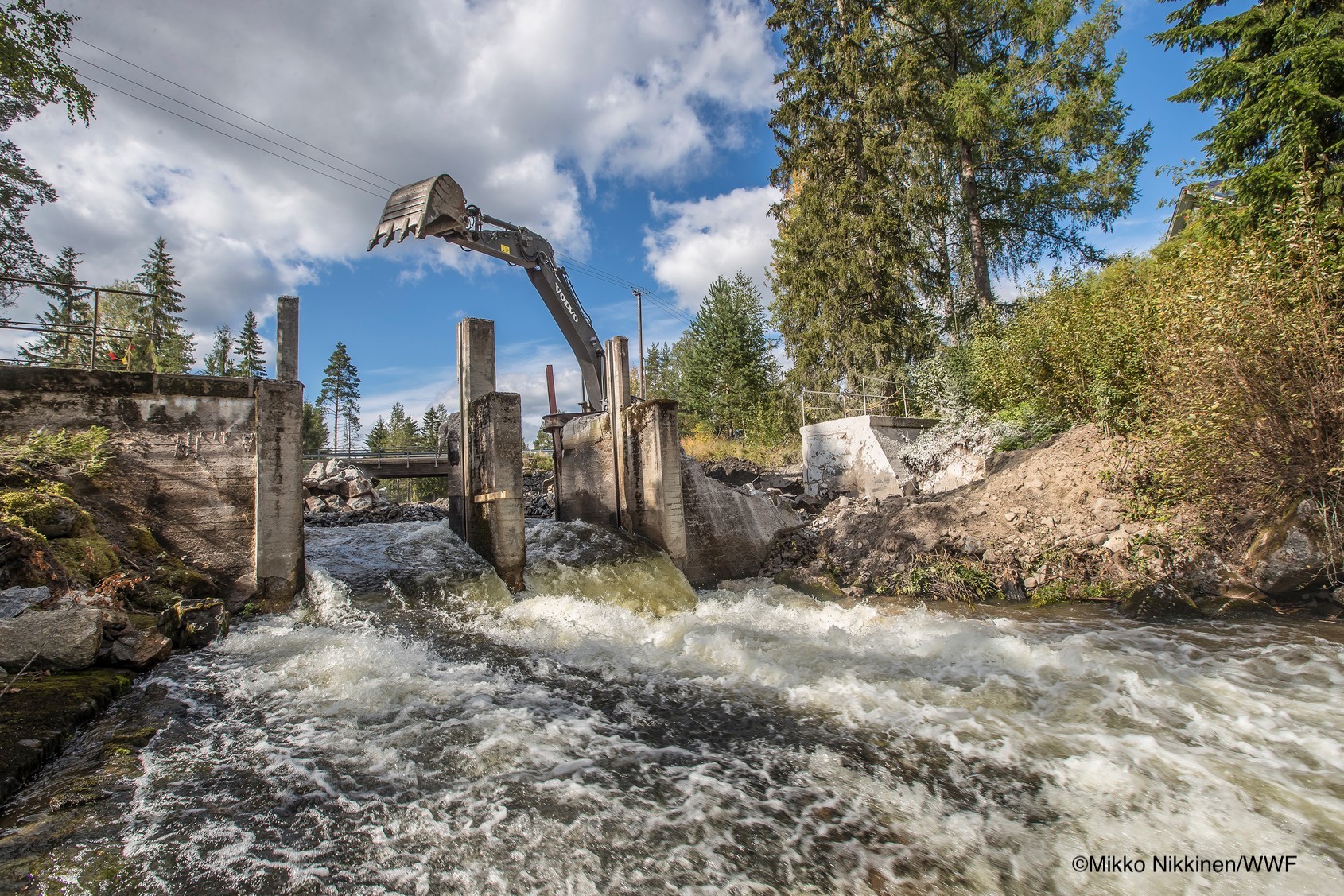 The water now flows freely in Kangaskoski on the Hiitolanjoki River, where the dam was dismantled. In the picture there are dam structures and an excavator. ©Mikko Nikkinen/WWF

WWF Involved as a funder

The Hiitolanjoki restoration project is carried out by the South Karelia Recreation Area Foundation, which has acquired power plants in Lahnasenkoski, Ritakoski and Kangaskoski. Power plant buildings belonging to nationally significant built cultural environments (RKY) will be renovated, and museum and tourism activities will be planned for them. In addition, the project includes the improvement of the surrounding landscape and camping services.

The South Karelia Recreation Area Association is carrying out the restoration of the Hiitolanjoki River with funding from various sources. The main financier for the acquisition of the power plants was the Ministry of Agriculture and Forestry. In addition, donations were received from private foundations, companies and individuals. There have also been sufficient funds for the restoration of Kangaskoski, which has additionally received EU program funding from the CBC program (RivTimes project). The largest financiers are WWF and the Lassi Leppinen Foundation, the South Karelian Savings Bank Foundation, OP Simpele, Lähi-Tapiola and the municipality of Rautjärvi. A significant number of donations have also been received from private individuals. A consortium of main funders, ministry officials and regional regulators, museum experts, and local municipalities together form a project team that is following and coordinating the removal project.

The member of Dam Removal Europe network, WWF Finland, was active in the restoration of the river Hiitolajoki already in 1990’s, when they funded the dismantling of the remaining barriers on the Russian side. This made it possible for the migratory fish to return to Finnish waters, thus creating a need for solutions for the remaining migration barriers, now all on the Finnish side of the border. 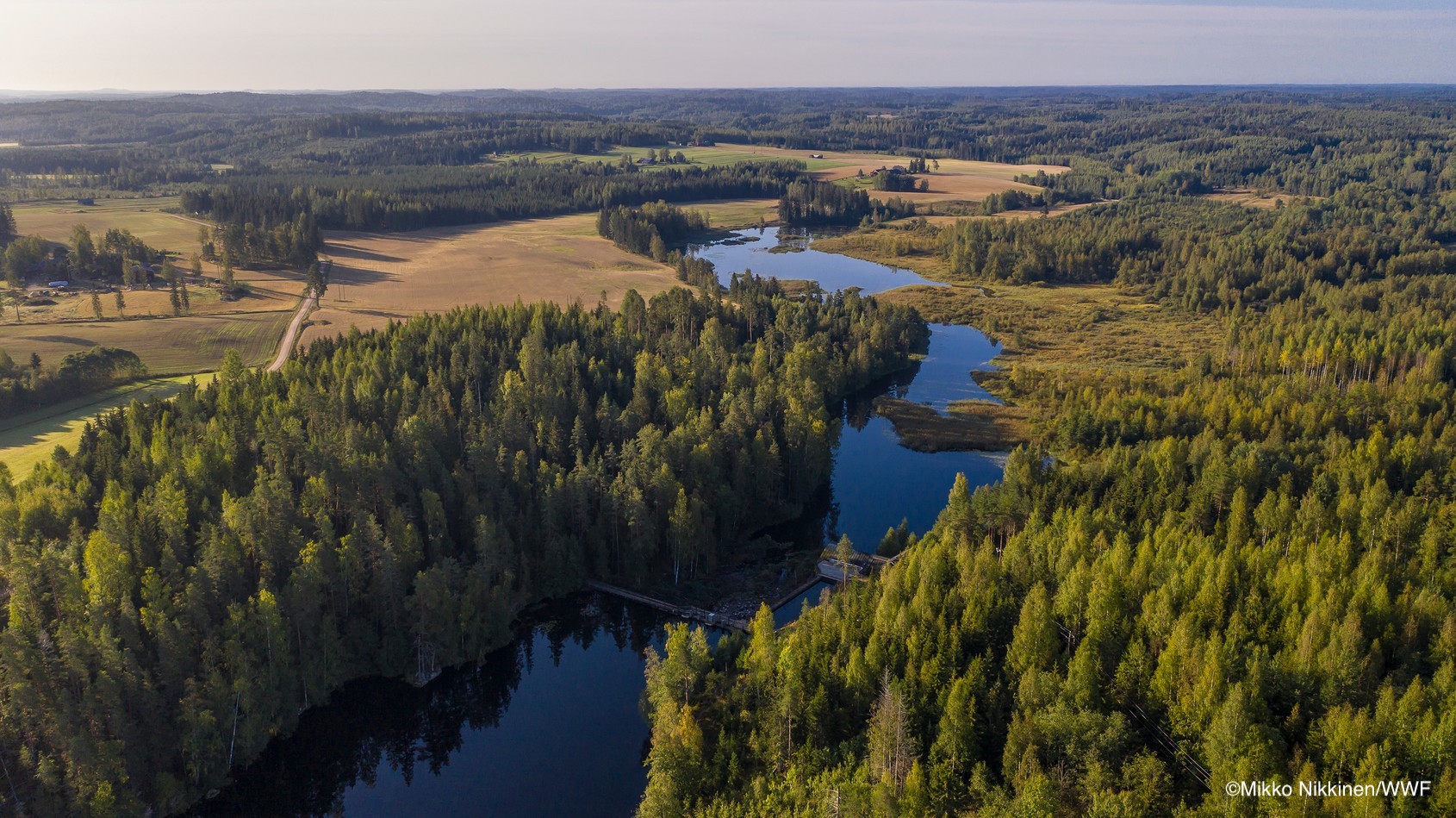 Overhead photo of the Hiitolanjoki River

The Dam Removal Europe team visited the removal sites to shoot the #DamBusters documentary. Pictured is Pao Fernández Garrido with one of the dams to be removed in 2023. Learn more about #DamBusters here!