(Or the French version here).

The 5th International Dam Removal Seminar was held from the 24th to the 26th of September in Rennes and Avranches, France. European Rivers Network (ERN), one of the 6 partners of Dam Removal Europe, with the support from numerous French partners, did a superb job organising the seminar. In total more than 240 participants joined from 23 countries and three continents; locals from the Rennes-Avranches region accounted for 30% of these attendees.

This seminar was particularly unique because we fortified the idea that dam removal is not only about the fish and river but it is also about the people and affected communities. If you remove a dam, the land, river and valley emerging from the empty reservoir may be used for the local people to enjoy. However, it takes communication and collaboration to ensure a transparent and inclusive restoration process. In Normandy, we learned that, unfortunately, this was not the case with this particular removal.

On the first day in Rennes, we learned about the history of dam removals in France, Finland’s largest dam removal, updates from a 20-year-old dam removal case in France, and the process of the Sélune river restoration works  and research programme—a remarkable scientific monitoring program coordinated by INRA. Of particular interest was the presentation on the social approach to ecological restoration, “Is the removal of the Sélune dam also a failure?” This presentation was key, as on the second day, we would meet the “friends of the dam” in Avranches.

In Avranches, we were greeted by the “friends of the dam” together with their protest signs (peaceful and respectful). The deputy chairman of “les amis du barrage,” Mr. Roger Lebeurrier took a few minutes to share his thoughts, opinions and visions about the Vezins Dam removal. His overall message was, “We have been excluded from the decision making process.” 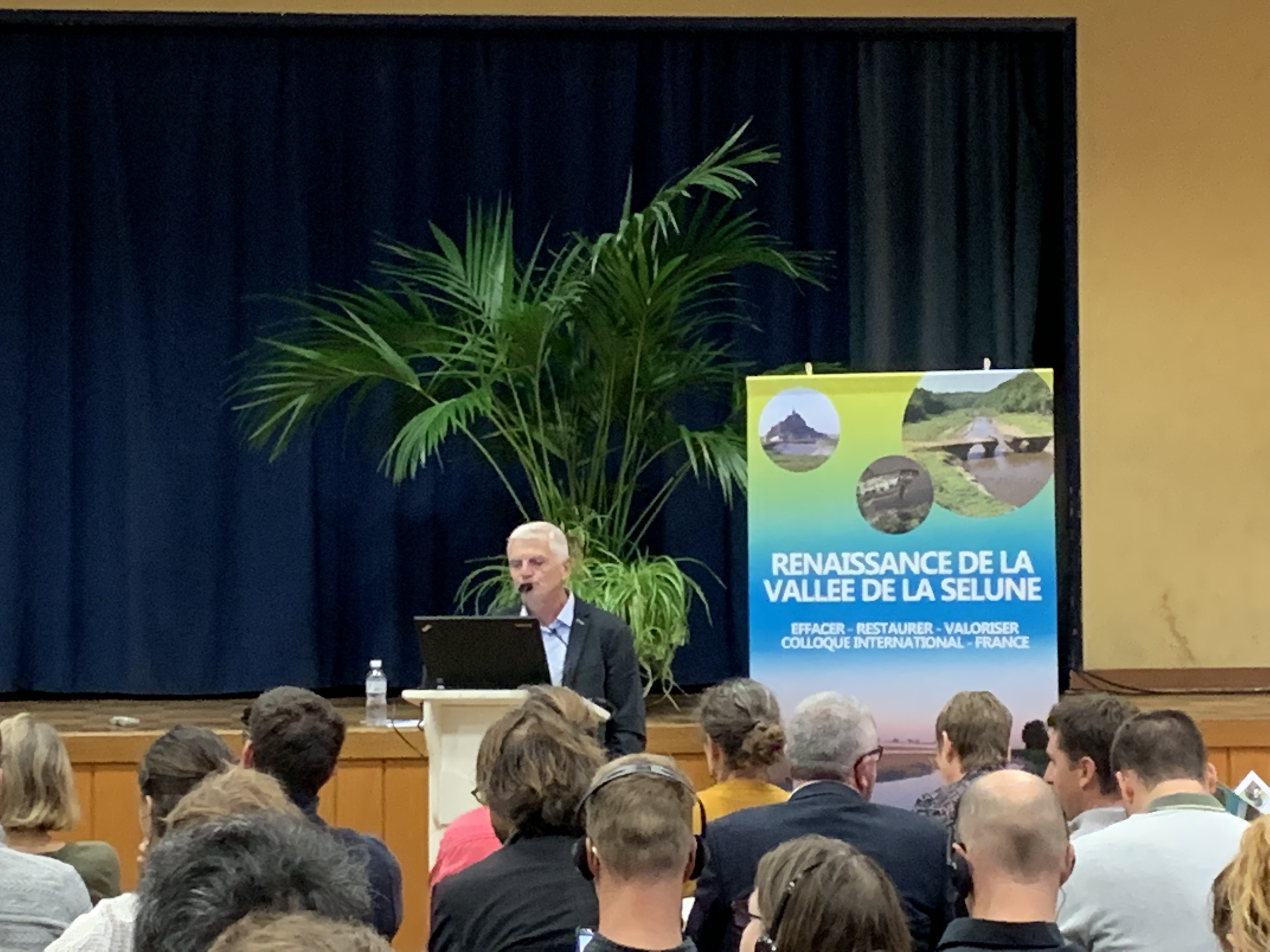 This was special because for the first time, we heard the oppositions perspective and learned so much. One of the eldest men of the opposition said (in French), “I wish this event would had happened 10 years ago,” and thanked us for coming. For them, it was the first time professionals (from all over the world) were listening. In turn, we learned about the crucial importance of the social side of dam removals. We also heard great ideas from other experts about what could have been done to avoid the conflict and make inclusive decisions.

The seminar continued on with a presentation about the project Four Major Rivers in South Korea–a top-down decision to build dams in rivers.  However, the dammed rivers turned into “green algae lattes,” and now there are plans to start removing the structures again. We will provide updates to this story as it develops. 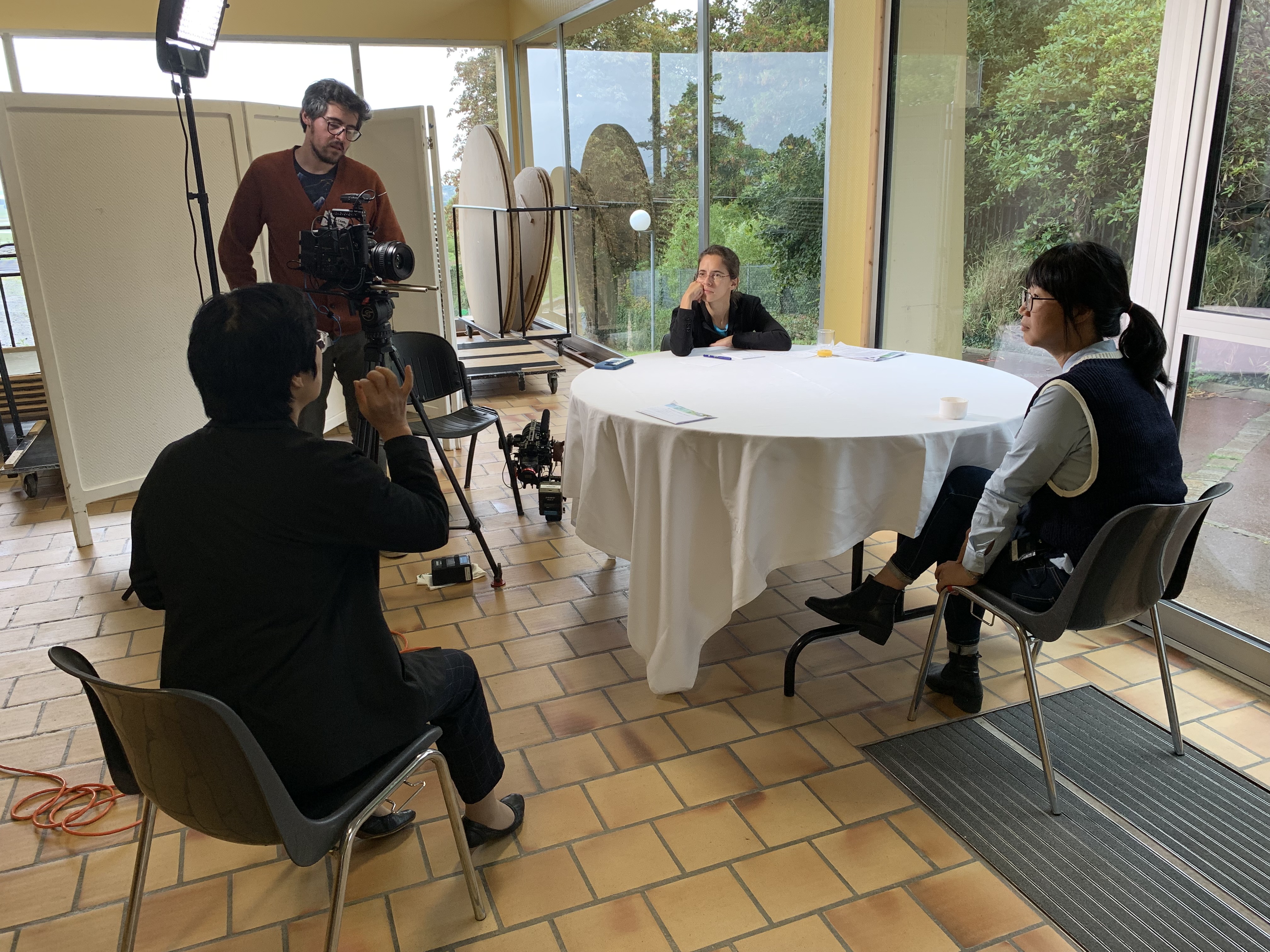 Revival of the Sélune Valley ended with a fascinating fieldtrip to the Vezins Dam. The destruction team was actively removing this 36 metres high barrier when we visited. For me, this opportunity to watch the biggest crane in France peel away a 90-year-old structure was incredibly satisfying. In a few years, massive salmon that once swam in the Sélune will return.

See the great cartoons made at the seminar by Seppo. Thanks Seppo!