Hiitolanjoki River in Rautjärvi, South Karelia, is home to Finland’s last remaining stock of original and fully natural landlocked salmon. Landlocked salmon, the provincial fish of South Karelia, are more attractive to fishing enthusiasts than any other fish species in the inland waters of Finland.

Hiitolanjoki River holds considerable economic potential to the region. In addition to high-quality fishing tourism, the cultural historical values of the area and cross-border cooperation with Russian actors provide a good framework for the development of tourism.

Barriers to the upstream movement of migratory fish will be removed

The South Karelian Recreation Area Foundation is acquiring the hydropower plants at Kangaskoski and Ritakoski and corresponding real estate from Hiitolanjoen Voima Oy. The freeing of the rapids on Hiitolanjoki River has taken decades of work that has involved not only the authorities, but also numerous foundations, associations, companies and private individuals whose unending belief in a free Hiitolanjoki River is finally leading towards a long-anticipated outcome.

As a result of the acquisitions, the South Karelian Recreation Area Foundation will own all the dammed rapids that have acted as a barrier to upstream movement in the Hiitolanjoki River: the power plants at Ritakoski, Lahnasenkoski and Kangaskoski, as well as their corresponding facilities. The dams at the power plants will be dismantled and the rapids restored, resulting in the additional formation of new breeding sites for Ladoga salmon and trout, as well as free upstream movement to extensive headwaters.

“This restoration project will come to consolidate the position of natural landlocked salmon in Finland, as well as multiply the current salmon production on the Finnish side of Hiitolanjoki River.“

With a combined descent of 18 meters, the rapids at Ritakoski, Lahnasenkoski and Kangaskoski will form an exceptionally stunning passage in Southern Finland, which of course will also include the already free-running rapids at Uudensillankoski, Rapukoski and Ali-Juvankoski, located upstream.

Free rapid areas for migratory fish will also open on the Torsa Trail in Silamusjoki River and Torsanjoki River, as well as in numerous other small streams.

“In the grand scheme of things, the dismantling of dams is an important practical measure that can also contribute to curbing the global loss of natural biodiversity. The work involved in restoring the viability of fish stocks is rewarding since fish as a group of species are very effective at reproducing when they are merely given a chance! The recovery in the wild reproduction of endangered fish has primarily only been observed in rivers where there are no barriers or they have been bypassed or removed.” says Sampsa Vilhunen, Program Manager, WWF Finland

The area located on the upper side of Hiitolanjoki power plants has plenty of restored areas of rapids in the main channel itself and in tributaries such as Silamusjoki River and Torsanjoki River. The estimated production potential concerning the spawn of migratory salmon and trout in the Finnish sections is 5,000 – 11,000 migratory young fish per year. That would mean a doubling of the current production of the river, mostly on the Russian side, and a considerable increase in migratory salmon and trout also on the Finnish side. Presently only a few dozen salmon ascend to the Finnish side annually.

A boost for regional development

As the salmon population strengthens, Hiitolanjoki River will be developed into Finland’s most important landlocked salmon river. This will enable the development of high quality and responsible fishing tourism and other recreational and tourism activities in the area. Ladoga Skerries National Park, Saimaa Geopark and the free Hiitolanjoki River will form a unique natural entity on a European scale. The opening of the nearby Parikkala border crossing to international traffic is now even more justified.

“The South Karelian Recreation Area Foundation has developed the Hiitolanjoki River hiking environment since 2004. The diverse natural environment has annually attracted thousands of visitors. The freeing of the rapids will increase the value and attraction of the Hiitolanjoki River recreational areas to a new level. There is no other similar area of free rapids in Southern Finland. ” says Hanna Ollikainen, Executive Director, South Karelian Recreation Area Foundation

The Hiitolanjoki restoration project has a wide funding base

Wild landlocked salmon stock cannot be found anywhere else in Finland. Sustainable tourism can be built on this valuable fish, the fascination brought by the proximity of the eastern border and the natural cultural values! 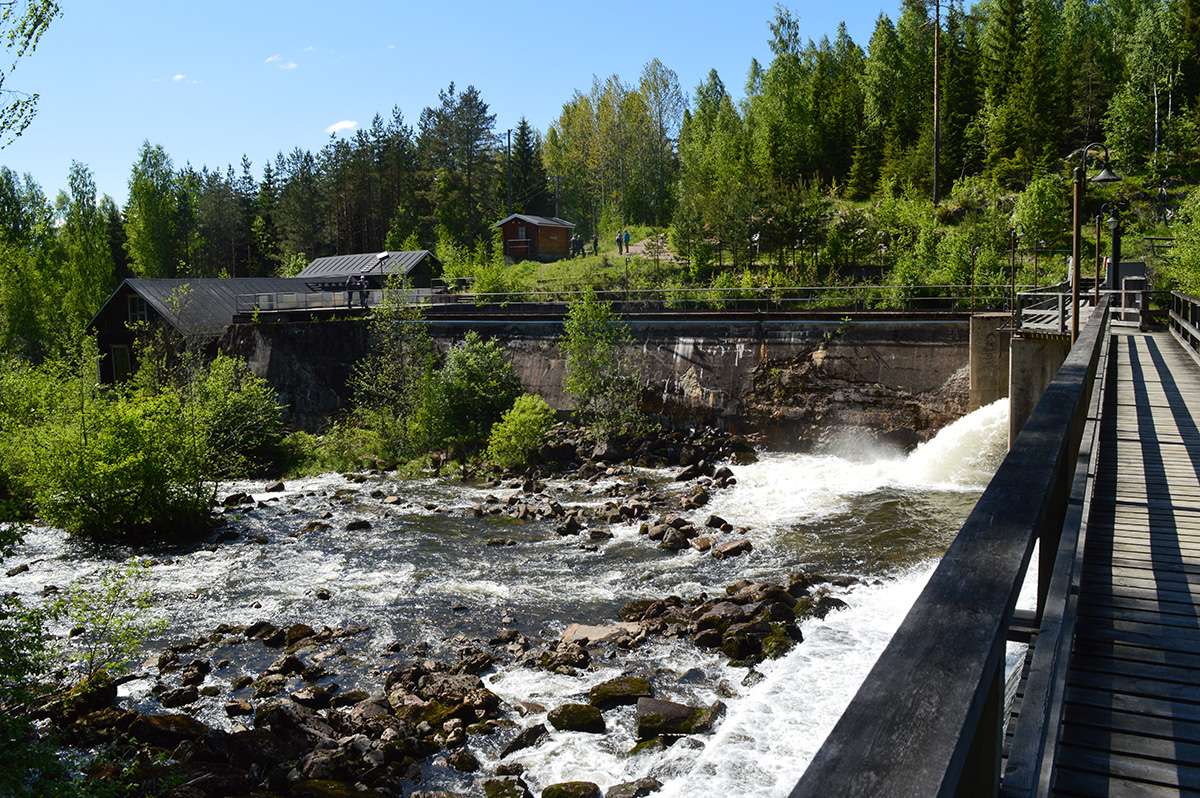 Most of Hiitolanjoki River is on the Russian side. Power plants preventing the movement of fish are located upstream on the Finnish side of the border. People power removes (yet) another weir!

People power removes (yet) another weir!