From 2017 to 2020, a major project was carried out to restore connectivity to the Biała Tarnowska River, an internationally-important ecological corridor in Poland. Three weirs were completely removed, and twelve more obstacles to fish migration were re-constructed to allow fish passage with a series of innovative solutions designed and engineered to be unique for each location.

The Biała Tarnowska River is located in eastern central Poland and flows northwards from the mountain ranges of the Low Beskids in the Polish Flysch Carpathians for 101.8 km, to meet the Dunajec River in the city of Tarnow. It has a catchment area of 983.3sq km with many tributaries and is part of the Vistula River basin.

It is estimated that there are over 19,000 barriers on rivers in Poland. They were built to protect physical infrastructure such as transportation, communication and power distribution networks, and to provide drinking water or as a vital component of a power plant.

Degradation caused by human activity has been observed in the Biała Valley for many years. The weirs and other constructions built for water regulation have contributed to an impairment of the ecosystem which has disrupted geomorphological and biological continuity as well as the cohesion of plant and animal communities. The aquatic and riverine habitats have been fragmented, preventing migration of fishes and other aquatic organisms. Human activity also influenced physiochemical and biological processes.

In the southern stretches of the river, especially in deforested areas, the upper parts are characterised by permanent deep erosion of the riverbed caused by an increase in transport capacity, while in the lower sections there are sandbanks and gravel islands built up due to a decline in large debris being carried down from the upper reaches after the river was straightened and narrowed. This has negatively affected the occurrence and diversity of plants and animals as well as the ecological status and water quality of the river.

In spite of these extreme modifications, many valuable species of plants and animals can still be found in the Biała Valley and, in terms of at least its riverside habitats, Biała Tarnowska is a typical Carpathian river flowing through forests, including alluvial alder forest, arable land and meadows, and it supports a rare tamarisk Myricaria germanica. 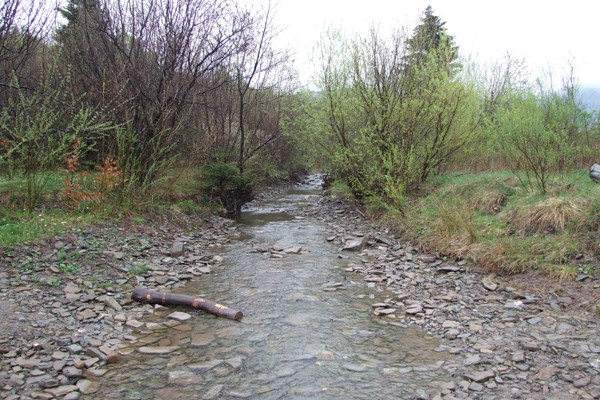 An upper stretch of the river 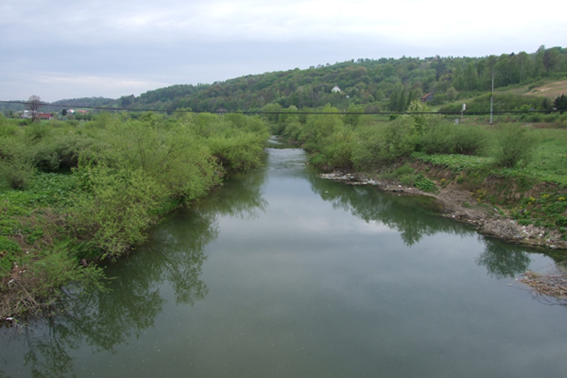 The ecological corridor of the Biała Tarnowska River Valley is part of the European Natura 2000 network and of regional and national importance. The project to restore the river and remove the weirs was part of both the Water and Environmental Program for Poland and the provisions of the Water Framework Directive and Habitats Directive. There was significant potential to improve the amount of spawning habitat for many species of fish living in the river. Some species needed access to a stony or gravelly substrate which was abundant in the upper stretches but reaching it was impossible due to the weirs and small dams located along the river’s course.

As a result of the construction of barriers and water regulation works, the Vistula sturgeon (the sterlet) Acipenser ruthenus, the Polish native sturgeon Acipenser oxyrynchus and salmon had become extinct and the populations of sea trout and vimba bream were almost completely eradicated. Populations of other river fish species were also much reduced in spite of re-stocking of Polish maritime areas and inland waters for the framework program of Fisheries Development in Poland.

The removal and modernisation of weirs on the Biała Tarnowska was the second stage of a project to restore connectivity to the river. The first stage was carried out between 2010 and 2014 when the Regional Water Management Board in Krakow, in cooperation with the Institute of Nature Conservation of the Polish Academy of Sciences and WWF Polska, implemented a project entitled: “Restoring the connectivity of the ecological corridor of the Biała Tarnowska Valley”. This stage dealt with the restoration of a total of 51 km of river with its adjacent riverside habitats, the removal of four weirs, the creation of favourable conditions for an increase in the abundance of yellow-bellied toads Bombina variegata and thick-shelled river mussels Unio crassus and the re-stocking of salmon.

The original project was co-financed by the European Union from the European Regional Development Fund under the Infrastructure and Environmental Operational Program.

During this time, designs for the modernisation, or removal, of the remaining fifteen barriers to fish migration were also developed. These weirs were chosen for improvement as they severely impaired the natural hydrological processes of the river valley. The riverbed was deeply incised in many places and had reinforced and raised banks which negatively affected natural flooding: smaller floods did not reach the floodplains while large floods inundated arable fields adjacent to the river, along with communication and construction infrastructure, which caused significant economic losses. To maintain natural retention and slow down the flow rate of the water, it would also be necessary to widen selected sections of the river valley to activate natural processes that would enable meandering and sediment transport. This would ensure the proper functioning of the river system by allowing the water to flow freely and naturally to shape the riverbed.

In general, therefore, the project aimed to restore the river to as natural a state as possible while taking into account the improvement of flood safety for residents. In addition, these activities were planned to improve the natural and landscape values of the Biała Valley which could have a positive impact on the development of tourism and fishing.

The strategic goal of the project was to improve the ecological status of the waters of the Biała Tarnowska River. The direct objectives were the elimination of migration barriers for fish and the opening up of the river migration corridor.

Achievement of the strategic goal and direct objectives was measured by the following indicators:

The project to remove three weirs and reconstruct twelve was scheduled to be implemented from 2017 to 2020 as part of the Operational Program Infrastructure and Environment 2014-2020. The total cost of the project from 2014 to 2020 was 9,248,826 Euros. The subsidy from the European Union Cohesion Fund was 7,840,375 Euros with the remainder coming from the Polish state budget.

The Regional Water Management Board in Krakow was ultimately responsible for the decision to remove the weirs.

In co-operation with the local authorities, the project provided for promotional activities to inform the communities of the four local municipalities involved and, in particular, the inhabitants of the towns near the weirs. Residents were informed about the purpose of the work, its progress, possible difficulties and the benefits for the environment and the community. Actions were also taken to promote the project outside the immediate area including among specialists dealing with water management, naturalists, environmentalists and hydrotechnical engineers.

The weirs that have been completely removed were situated near the villages of  Biała Niżna, Florynka and Kąclowa. The locations of the removed weirs are marked by red elipses in the map below. 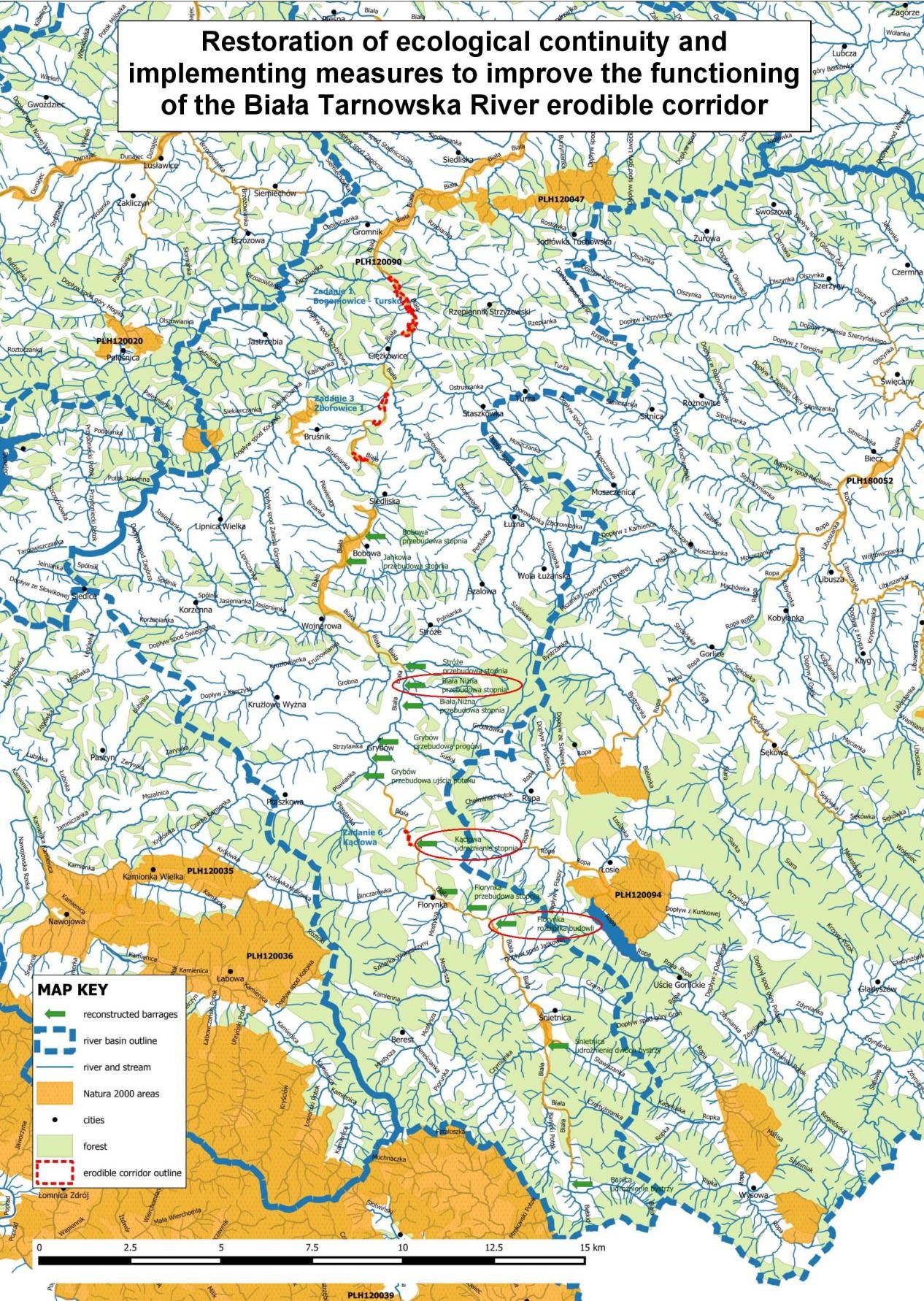 Near the village of Biała Niżna, a pair of weirs were in very poor condition and no longer performed any function. The 1.3 metre difference in height between the upstream and downstream levels prevented fish migration. The solution was to remove the two weir steps with additional measures to prevent excessive erosion of the river bed. 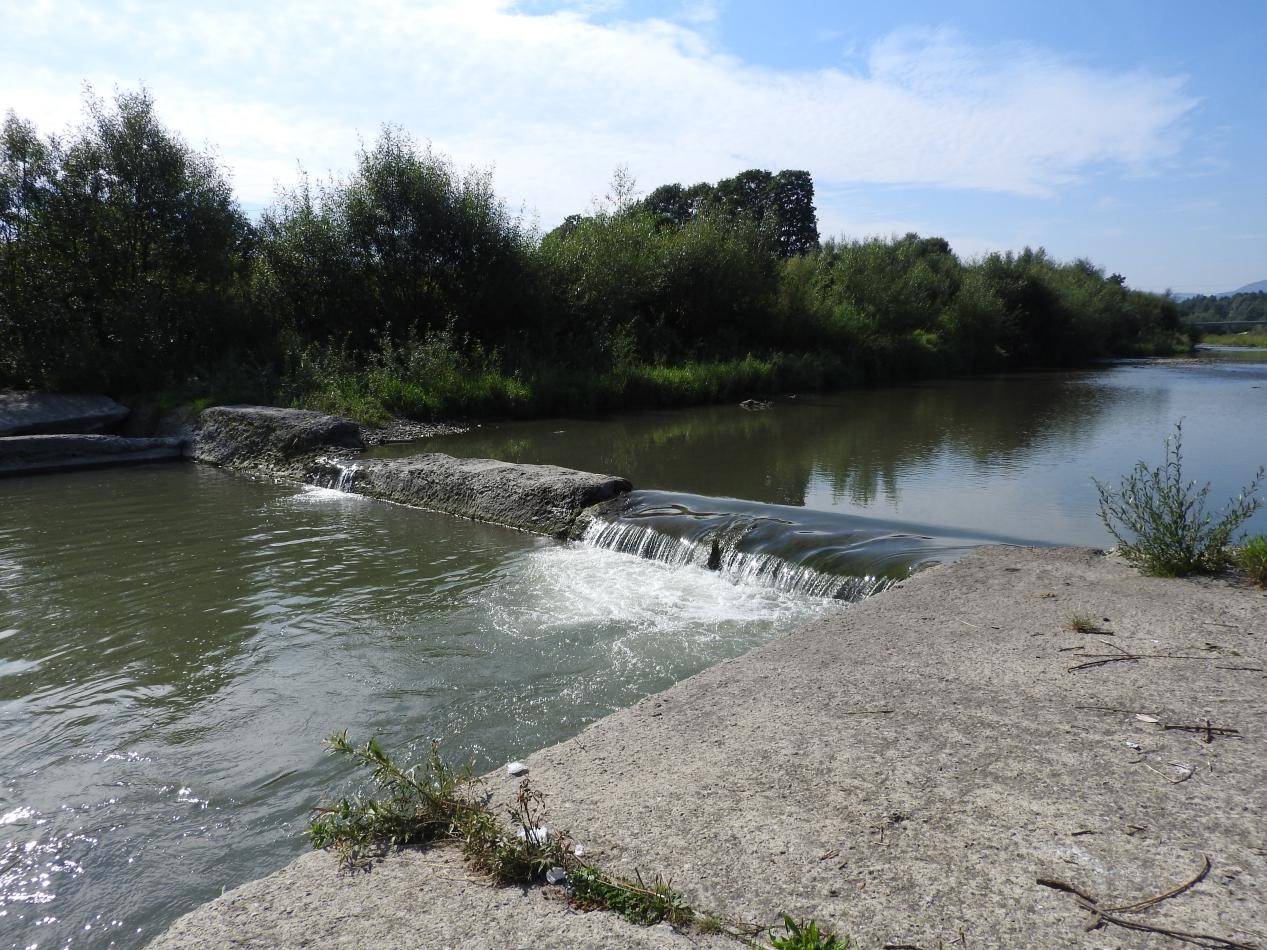 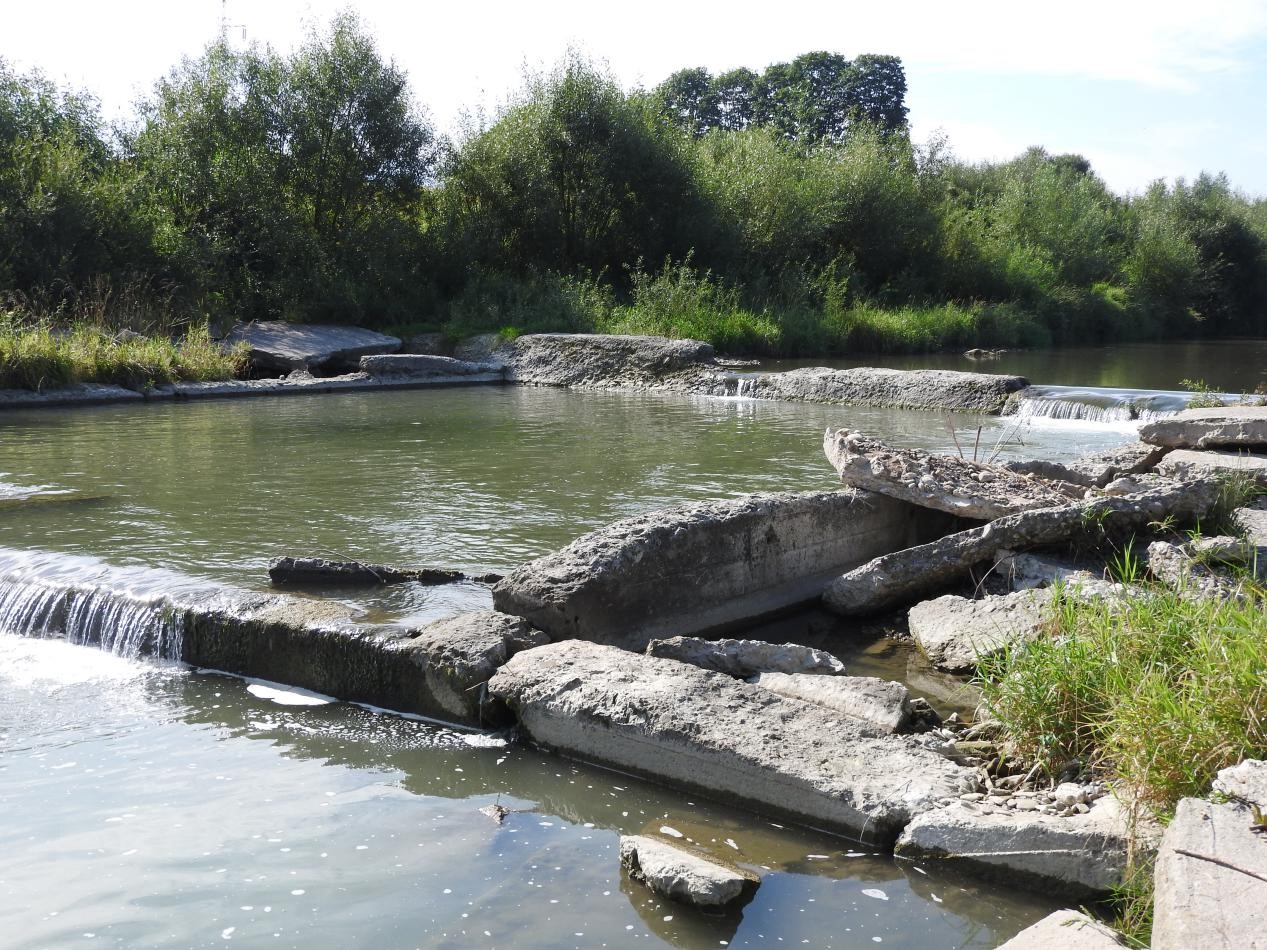 Another view of the Biała Niżna weir before removal 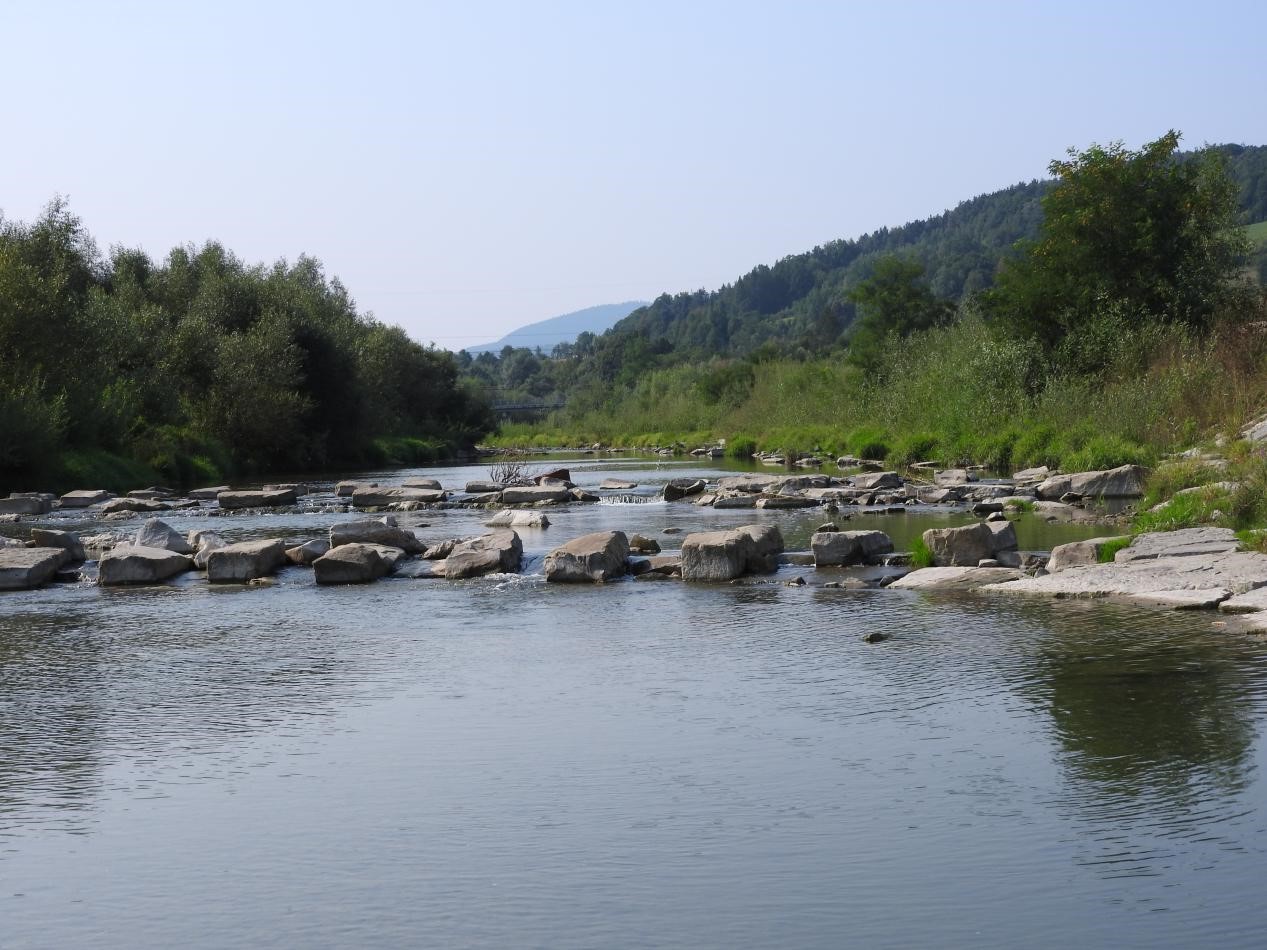 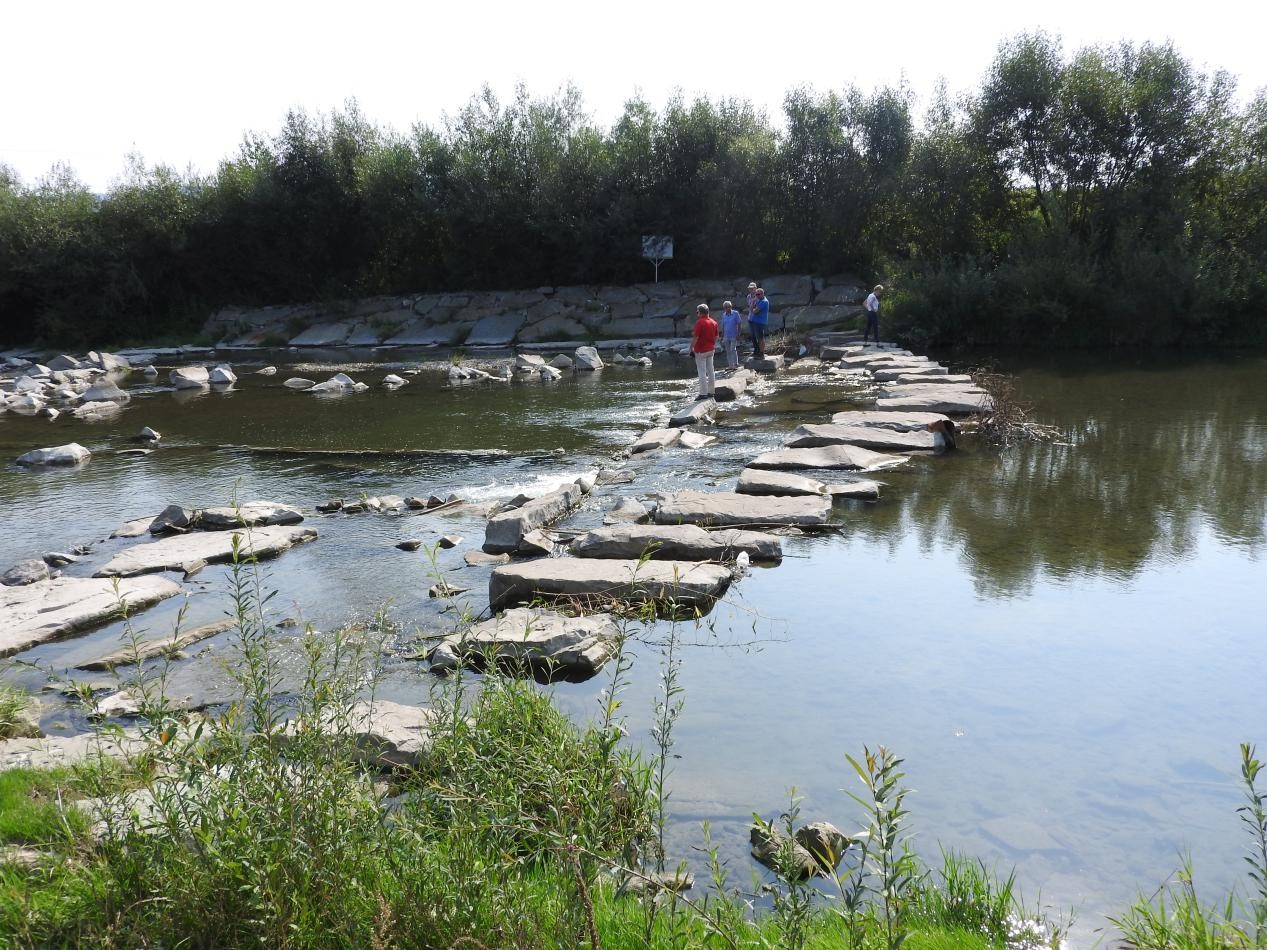 Another view of the Biała Niżna weir after removal 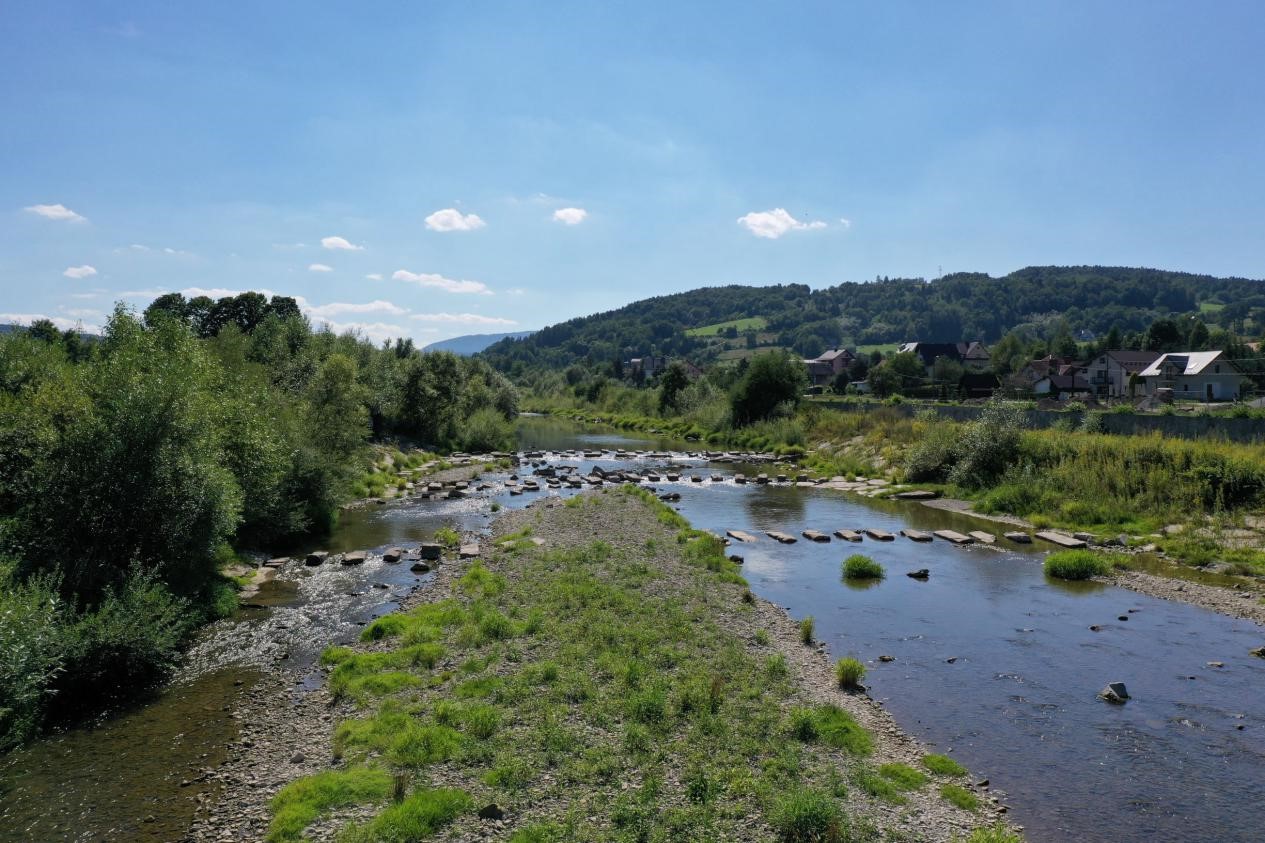 More photos of the Biała Niżna weir removals can be seen here (with text in Polish):

The weir step at Florynka was built as part of a small hydroelectric power plant which was never completed. During a flood in 2010, the buildings were destroyed and, due to the inappropriate location of the plant, the area of river bank where they had stood was damaged. The remains of the hydrotechnical structure were now redundant and it was decided to remove the weir. 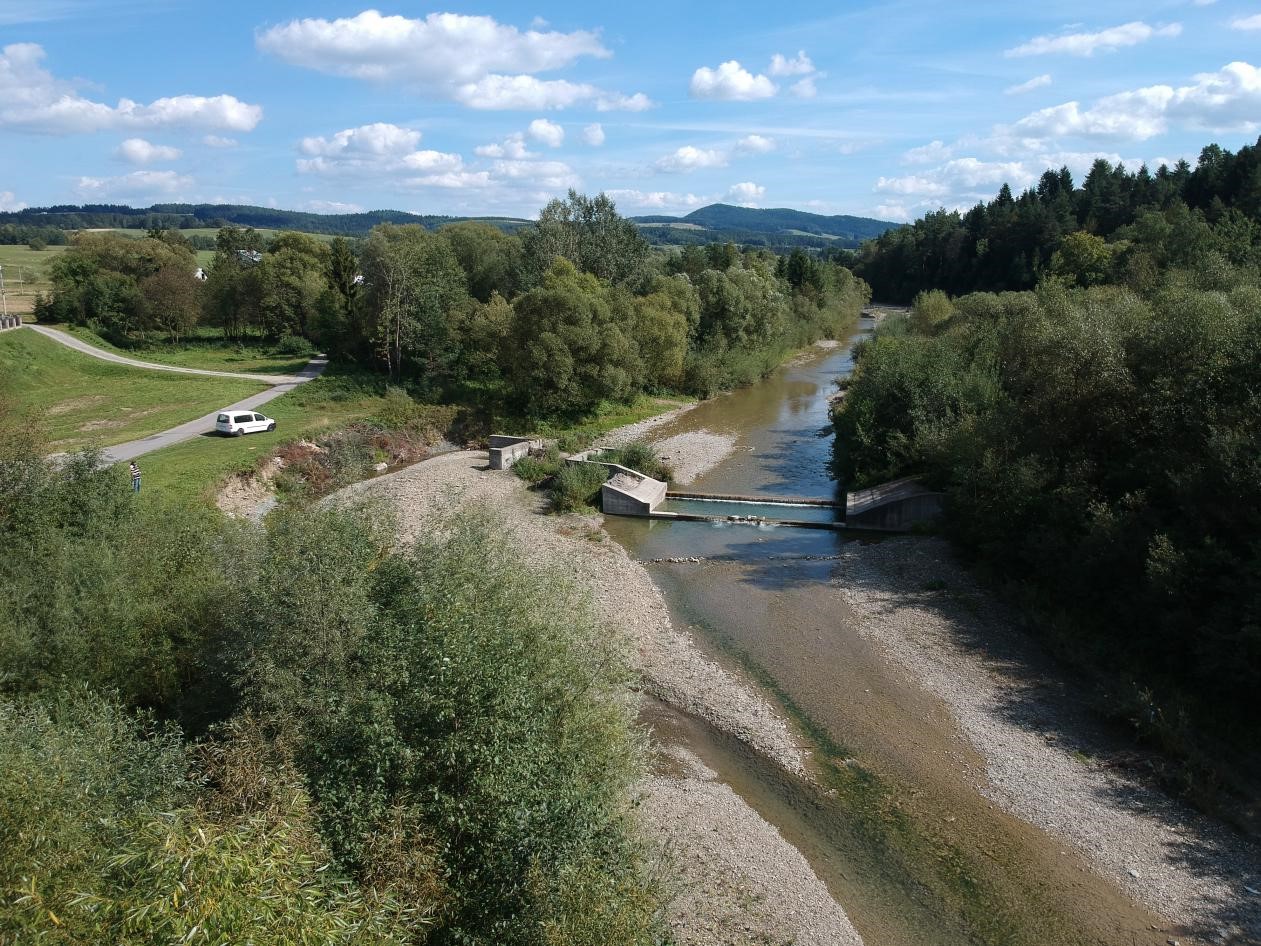 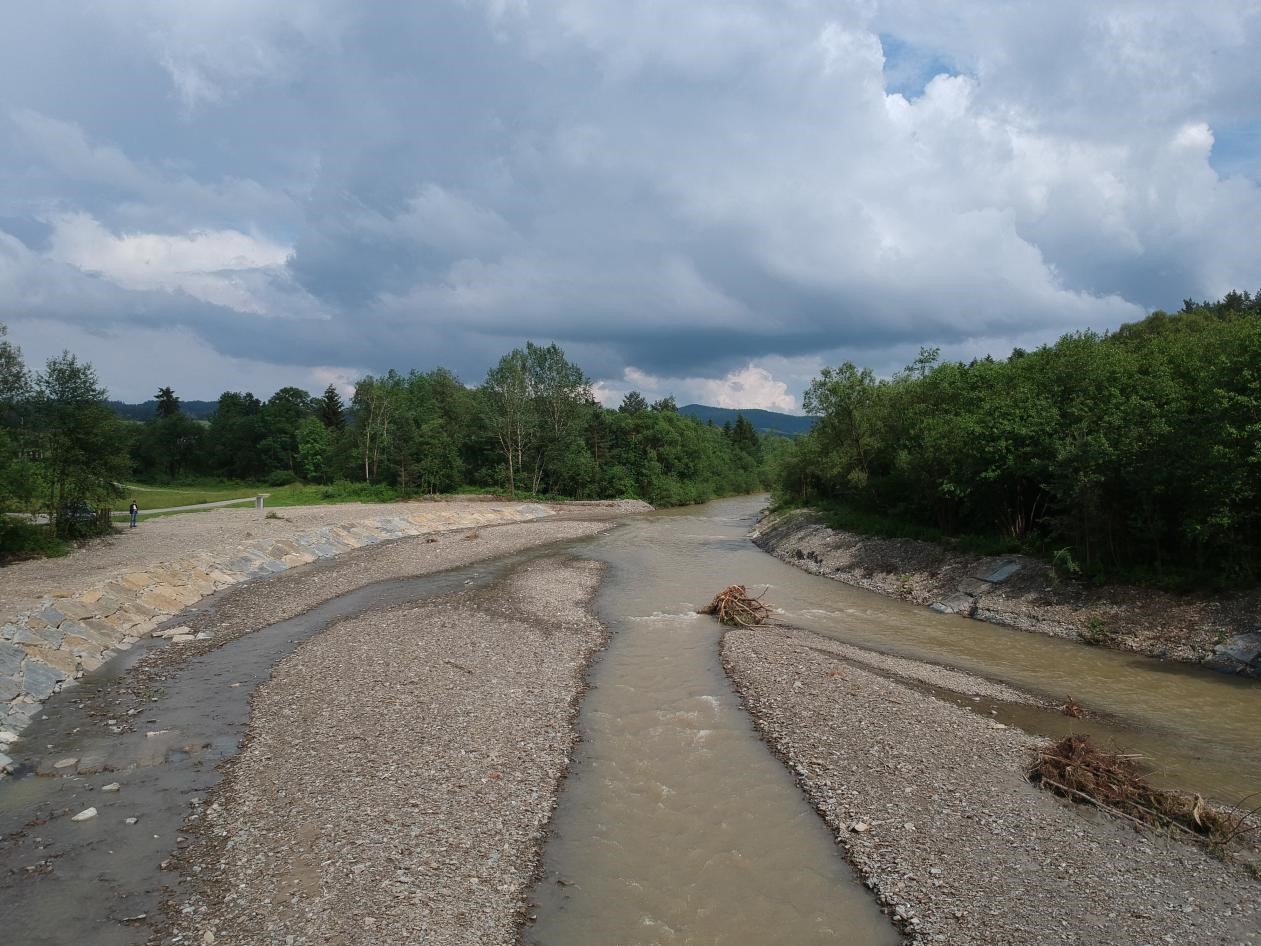 Florynka weir before and after removal 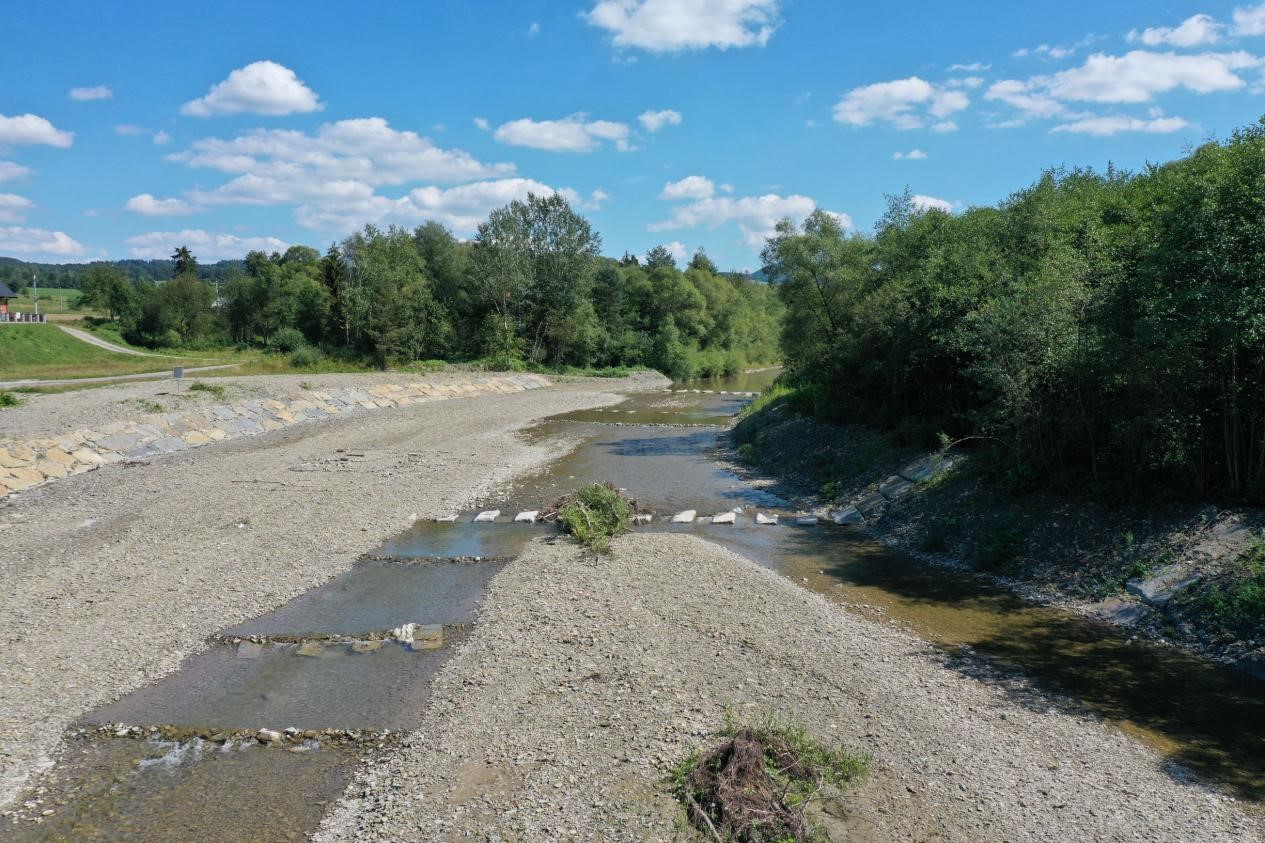 More photos of the Florynka site can be seen here (with text in Polish):

Near Kąclowa, there was another redundant weir threshold. Its entire structure was destroyed and large chunks of concrete were lying on the bottom of the riverbed disrupting the natural flow patterns of the river. This weir and all its broken concrete parts were removed. 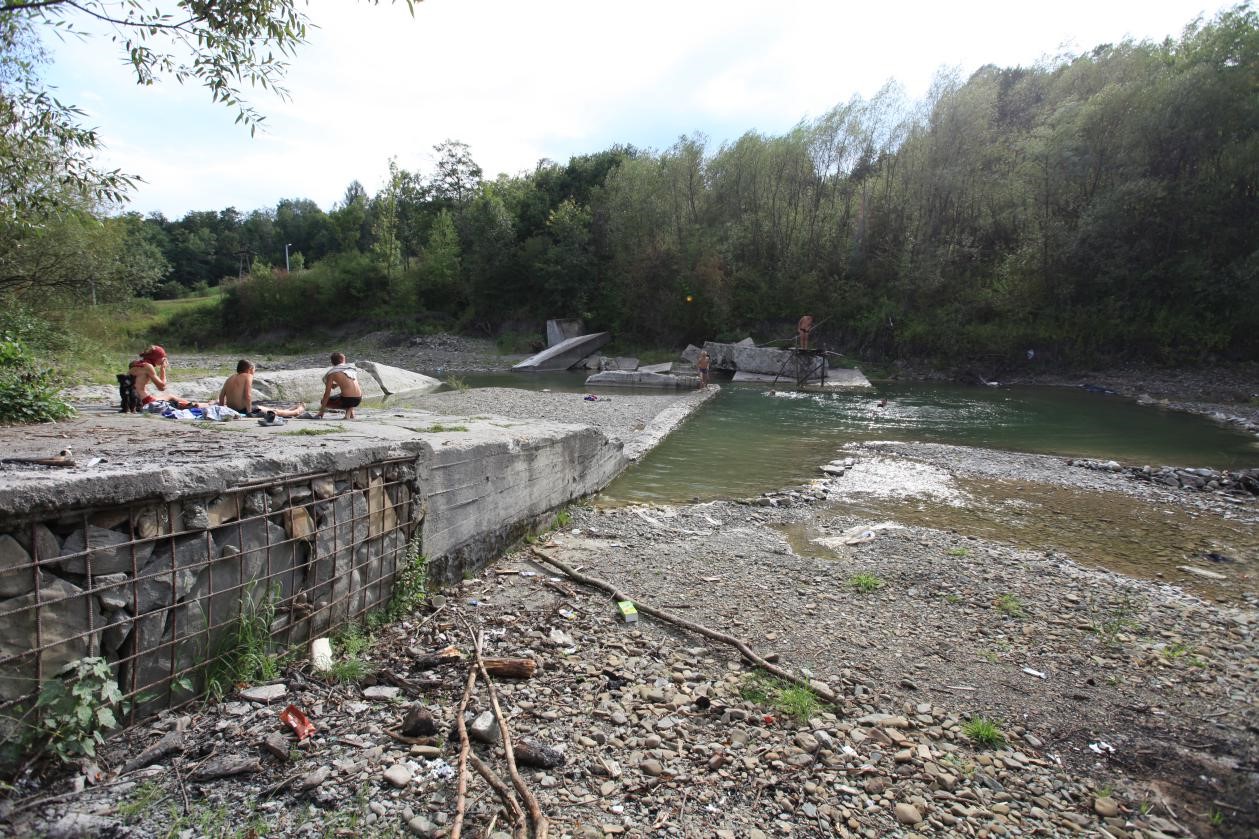 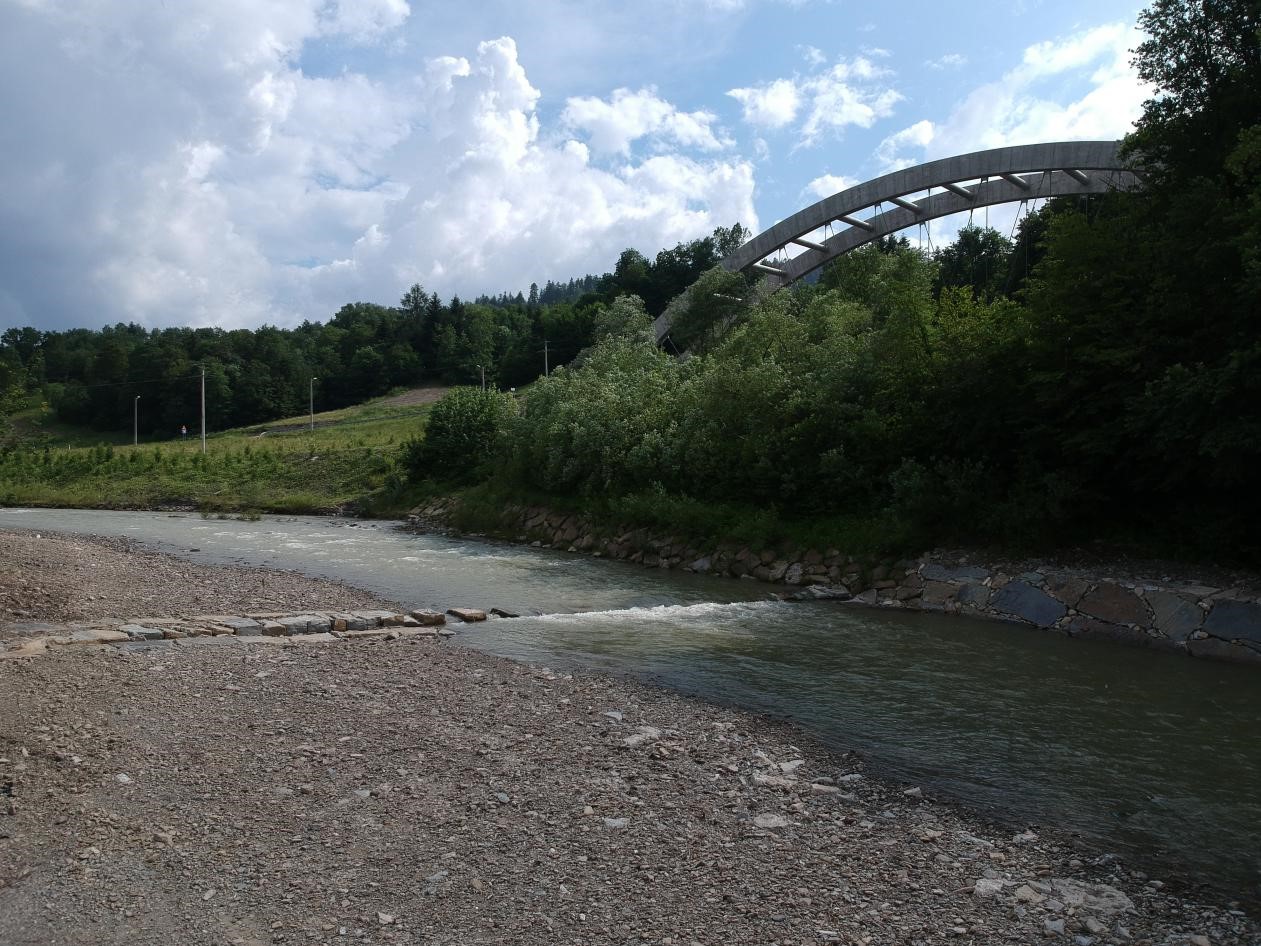 Kąclowa weir before and after removal 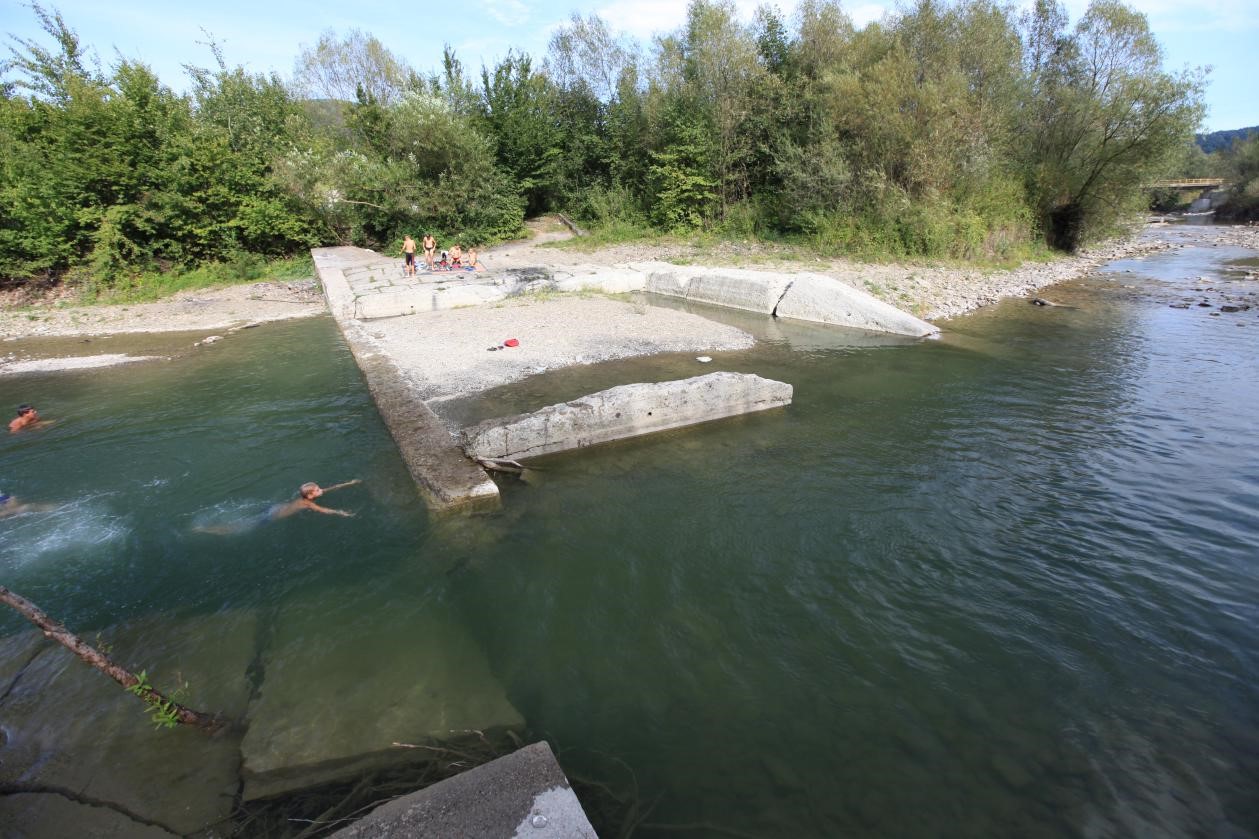 More photos of the Kąclowa site can be seen here (with text in Polish):

Additionally, works were carried out to restore natural processes to the river corridor, riverbed and floodplains. These were intended to increase the safety of residents and decrease the risk of flooding, to enhance the quality of the adjacent habitats and further to improve the migration route for fishes. With its floodplains cut off from the river by natural embankments, the single, narrow and deeply-cut riverbed of the Biała Tarnowska River prevented small floods from irrigating alluvial thickets and allowed large floods to overflow the embankments and flood farmland, housing and communication infrastructure. Thus, the solutions employed to enable fish migration also took into account the local conditions in the vicinity and the protection of areas adjacent to the riverbed and other infrastructure during times of high water flows.

These actions, in time, are expected to increase the width and capacity of the riverbed and lead to the creation of floodplains in designated areas. More variety in river bank structure, river substrate and water flow will create new habitats benefiting not only spawning fishes and their juvenile stages but also other aquatic organisms and the riparian vegetation. To achieve the areas of floodplain needed, about sixty hectares of private land were purchased for this purpose.

The project has also restored those habitats damaged or destroyed during construction works and intends to monitor the effectiveness of the works it has carried out. The building of a fish migration monitoring station was included in the project.

The following words have been written by a member of the project team:

Our project is a significant interference in the ecosystem of the river and the places of reconstruction after completion are ugly – as a wound after an operation. Only after a few floods is the river starting on its own to arrange the channel and signs of our action now remain just as a scar.

Our past experiences are pointing towards the fact that, given the geological, morphological and hydrological conditions of the Upper Vistula, the removal of all of the weir structures from the channel of the river would start unchecked bottom erosion. The bottom of the river will deepen and the river will lose the ability to meander and the possibility of supplementing shortages of gravel downstream. The purpose of the three weir removals and twelve reconstructions and modernisations was not only to provide good conditions for the migration of fish up and down the river but also to facilitate the permanent transport of gravel.

With many thanks to Marek Jelonek, Project Manager, for supplying information and photographs.

The official Biała Tarnowska project website in Polish is: https://biala-tarnowska.org/

The following pages have information about the project in English and many excellent photos of the works before, during and after the removals and reconstructions:

There are also case studies of weir reconstructions: