The removal of the Bražuolė Dam is another barrier removal that made history – it was the first official dam removal in Lithuania.

The dam was situated on the 22.7km-long Bražuolė River. The Bražuolė flows through the Elektrenai municipality north-west of Vilnius, the capital of Lithuania, and is a tributary of the Neris River which joins the Nemunas River on its way out into the Baltic Sea.

The Bražuolė River has an important role to play in the ecology of the area as it forms part of the Neris Regional Park, a Natura 2000 site. Created in 1992, the 10,000-hectare Park is the most heavily-wooded of Lithuania’s regional parks and includes one of the largest and oldest surviving stands of oak trees in the country. The Park was established to preserve the glaciated landscape of the Neris valley, its distinctive flora and fauna and the remains of Lithuanian cultural heritage going back for over 10,000 years.

According to historical records, the dam was first built in the 19th Century to power a water mill. The stone step was 1m high and 1m wide and the total length of the dam was nearly 8m. Initially, it was constructed from large boulders and wood but was re-built during the mid-20th century using mainly concrete. It eventually became obsolete and, without a registered owner, was abandoned for decades. 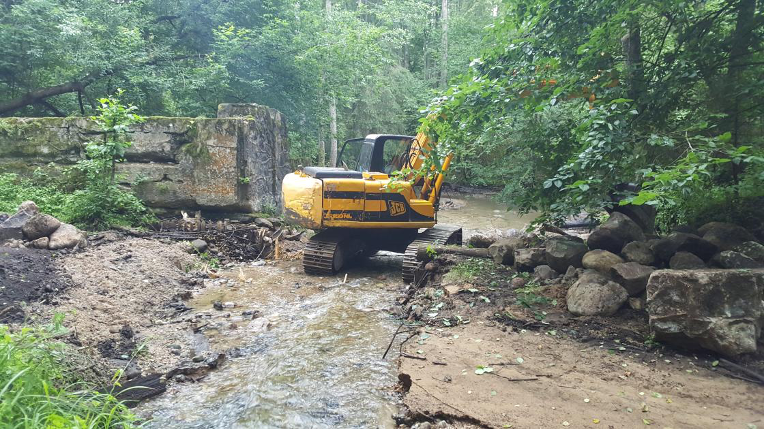 The barrier affected fish migration upstream by cutting off suitable spawning grounds, in particular for sea trout Salmo trutta. Scientific research recently revealed that the stretch of river upstream of the dam had poor-quality habitat and average ecological status. Removing the dam would open up nearly twenty-five kilometres of spawning areas with a significant potential not only to improve fish migration routes but also the quality of habitat for spawning.

Before the Bražuolė removal, Lithuania had already passed some strict laws with regard to construction on rivers. In 2004, a law was passed which prohibited construction on ecologically-sensitive rivers and this was tightened in 2020 to prohibit all construction that would contribute to the ecological condition becoming worse on any river. On small creeks, however, local people still build illegally for bathing, saunas and holiday homes or tourism. Lithuania is generally lacking in opportunities for the creation of hydro-electric power as it is a very flat country but the largest rivers, which are also the most ecologically important, have some potential for hydropower.

In the past, Lithuania has not had a systematic approach to dam removal. Fish passages have been built but poor communication between government and state agencies, and other stakeholders such as land owners, has meant that no over-arching strategic plan for dam removals has been formulated. However, the Lithuanian government is now in the process of making a priority list of dams to be removed.

There has been one notable conflict over a dam removal when a dam collapsed in Vilnius. The original dam had been kept for aesthetic purposes and, after the collapse, the Ministry of the Environment advised removing it altogether but there was a lot of opposition to the removal and the dam was eventually rebuilt.

The Bražuolė dam removal was primarily planned as a pilot project to showcase how good river restoration practice could improve the quality of riverine habitat and contribute overall to the functioning of a healthy ecosystem. The Bražuolė dam was chosen because it was old, obsolete and dangerous to the public. It was also in a river which was valuable for fish migration and spawning: the Neris Regional Park Authority wanted to get rid of the dam as it was a target for poachers who found it easy to catch fish that were resting below the dam.

Planning the removal took one year and involved the Lithuanian Fund for Nature, the Elektrenai municipal government, the Neris Regional Park authority and local forest managers. Permits were required from the all the authorities involved.

Particular environmental specifications were placed on the works which were only allowed to be carried out from July to September when migratory fishes were not present in the river. This avoided the periods of migration and spawning, and egg hatching time. Nests are also vulnerable to sediment and debris.

The landowner was approached in order to obtain a permit to use roads on their land for access for machinery but did not give permission. Instead, alternative access roads had to be found.

Local people were also informed about the removal with information posted on noticeboards and facebook pages. At first, there was no response and it was only after an excavator had arrived on site that local residents became worried and made complaints. A public meeting was arranged to which about forty people came and the environmental and public safety reasons for the removal were explained. A petition in favour of keeping the dam was later signed by about thirty people but this was submitted after the dam had been removed.

Before the removal took place, the Lithuanian Nature Research Centre monitored the composition of the fish species to establish the Fish Index for the river. In order to obtain an accurate estimate of the richness of the index, researchersavoided monitoring during the salmon spawning season because the presence of many salmonids in the river during their spawning period would distort the data. Major changes in the Fish Index were not expected after this removal as its aim was to provide a substantial increase in the areas of suitable spawning habitat.

The dam was finally removed in July 2020. It took only two days to break up the structure with an excavator and another day to tidy up the area and bury the debris.

The cost of the removal was 15,000 Euros including management and communication expenses. The removal was entirely funded from money donated to a very successful crowd-funding campaign organised by the World Wide Fund for Nature (WWF) in The Netherlands.

Before the removal, there was an unnaturally-wide section along that stretch of the river. In collaboration with local anglers, staff from the Regional Park placed rocks and logs on the river bed to encourage it to return to a more natural state.

The removal was so recent that no data has yet been collected to evaluate the long-term effects of the removal of BražuolėDam but the Lithuanian Nature Research Centre will be carrying out monitoring of the Fish Index until 2025. It is hoped that the two iconic fish species of the region, the sea trout and Baltic salmon Salmo salar, will soon be exploring their newly-opened spawning areas in the Bražuolė River.

”The whole project was an excellent adventure but sometimes required really difficult decisions. The most difficult was how to deal with the local community. It’s important to be very honest about what you’re doing and and to explain fully the reasons behind a removal. Face-to-face communication has proved to be the most effective way of resolving any conflict. We hope to adopt this approach for future projects.

The day after the removal, we hosted a field trip to the dam site for Government officials and scientists to learn more about the dam removal and our experience. The event was super positive and motivating for lots of people. It was amazing to see how much positive energy dam removal can bring - they were taking the remains of the dam as souvenirs!

The removal of this little dam was a huge step towards shattering the taboo over dam removals in Lithuania. Hopefully, these lessons will guide future removals.

Karolina GurzkaitėProject Manager and the driving force behind the removal 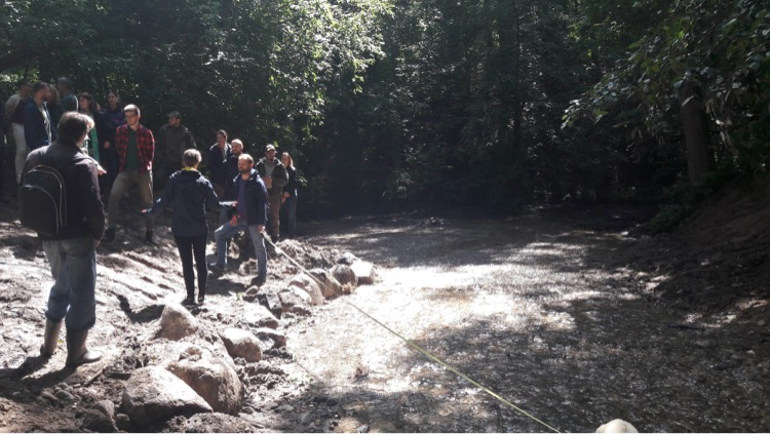 Visitors to the site learnt about the removal

I would like to thank WWF and Dam Removal Europe and my team who helped me throughout the whole process – Lithuanian Fund for Nature, Neris Regional Park team, Lithuanian Nature Research Centre, and the companies – Inzinerinis projektavimas and DA Kontaktas.

I am very grateful to all the donors who helped to crowdfund the money for this project. This wouldn’t have happened without them. Crowdfunding is very good for supporting new projects and innovation and it can be essential for getting things started and showing that they can be done quickly and for a reasonable cost. The crowdfunders who supported usare a part of this historic moment. Thank you!

We are now building on the success of this dam removal. Other people interested in dam removals have already asked for my help about how to obtain permits and want me to share the experience of how a dam can be removed. I have received a lot of gratitude from others for what we have achieved here and I have started building a team which will make dam removals easier in the future.

In November 2020, we had salmon nests downstream of the dam. The smolts are going to hatch by the summer and leave the nesting sites to make their journey to the sea. Hopefully, next time when they return to their birth place, they will appreciate their newly-refurbished home-river!

The first dam in Lithuania has been removed! Bražuolė is daily going through many changes and soon she will work out her favourite way to flow.

– With many thanks to Karolina Gurjazkaitė for her comments and photos. 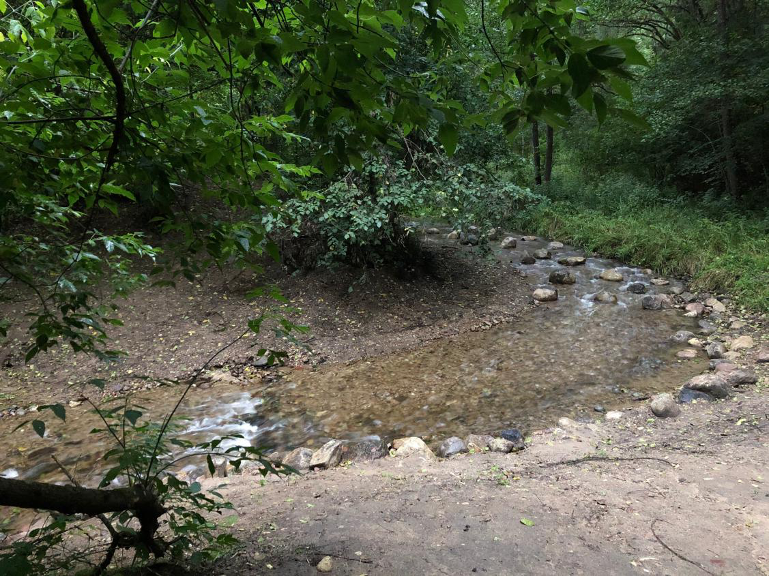 Karolina’s video of her crowdfunding request has good pictures of the dam and river in winter: https://crowdfunding.wnf.nl/project/brazuole-dam-in-lithuania

And Herman Wanningen’s interview with Vice Minister Martynas Norbutas of the Ministry of Environment on the future of dam removal in Lithuania (16th July 2018):

Take a short walk in the waters of the Bražuolė River with a National Park staff member, finishing at the site of the old dam.