In May 2020, the widest weir removal in England to date was successfully carried out on the River Ribble in the county of Lancashire. Samlesbury Weir was one of the largest remaining structures on the river and, as such, had caused changes to natural river processes which led to a dramatic drop in the numbers of fish, especially migratory fish species such as salmon and eels. The weir was situated near the city of Preston, next to Brock Holes Nature Reserve, and its removal was expected to have a major positive impact not only on migratory fish species but also on other wildlife in and around the river. The removal of Samlesbury Weir opened up a total of 61kms of river from the estuary to the next barrier upstream, Henthorn Weir, over 24 kms distant.

The River Ribble flows south-westwards from its source in the county of North Yorkshire, through Lancashire and into the Irish Sea at Lytham St Anne’s. It is 75 miles (120.7 km) long and is one of England’s forty-two principal salmon rivers. However, it is currently assessed as being ‘at risk’ as its salmon population has been put under significant pressure due to the large number of migration barriers on the river. Since 2010, angling catches have dropped by up to two thirds as salmon numbers have decreased.

The proposal to remove the weir was a joint project between the Environment Agency of England and Wales and the Ribble Rivers Trust and formed part of the Ribble Life for Water Scheme. Begun in early 2019, this scheme is a £1.45m programme of ten large-scale engineering projects which aims to restore natural flows and improve water quality, habitat and biodiversity. The works are funded by the Environment Agency through the Water Environment Grant, part of the European Union Rural Develop Programme.

Jack Spees, Director of the Ribble Rivers Trust, said of the Scheme:

This programme will bring huge benefits – not just to the river, but all riverine wildlife and beyond.

River restoration projects such as this involve the reversal of human influence by restoring the natural state and function of a river and, as the widest weir removal in England, the demolition of Samlesbury Weir will bring maximum benefit to the Ribble, its tributaries and the wildlife that are dependent on it.

The improved functioning of the river is something that can be beneficial for all the local communities who use the area, and there are many from Preston who walk the Ribble Way – a trail along the length of the Ribble that passes this location – who will benefit from a healthier river. Although many locals will be sad to see the feature go, it is hoped that the prospect of a more natural river will see an increased appreciation for the Ribble.

Samlesbury Weir was a hydrometric gauging station built in the 1970s by the water board to monitor low river flows but it eventually became ineffective and was made permanently redundant.

Although the weir was a low-head structure, it created difficulties for fishes moving up and downstream. The height from the riverbed to the weir crest was 1.93m with an added 0.67m to the top of the wing walls and the weir was 62m wide in total including 32m of abutments. All fish species were forced to expend a greater amount of energy to get past this barrier, especially those species which are not strong swimmers, and the weir also delayed the journeys of migratory fishes downstream including juvenile salmon smolts on their way to the sea. Delay at the weir exposed the smolts to poaching and greater risk of predation by humans and other animals and birds. The problems encountered by migrating fishes are compounded by the number of weirs in the Ribble catchment.

The River Ribble has recently acquired new importance for the recovery of the smelt Osmerus eperlanus due to the river’s estuary being declared a Marine Conservation Zone in 2019. The smelt, a small, silvery fish up to 30cm long, was once common and widespread in estuaries around the UK but its population has declined over the past 200 years. Smelts are anadromous fishes: in spring, they migrate upriver from the sea to spawn in freshwater. They have been known to congregate in large shoals in estuaries and are found in the Ribble Estuary in low numbers. The Ribble Estuary MCZ and the River Ribble are therefore essential components of the smelt’s life cycle; it is here that they feed and the larvae develop. Smelts are very sensitive to a deterioration in their surrounding environment such as overfishing, the loss of their spawning habitats, blockages on migration routes and the impacts of pollution and poor water quality. A healthy population of smelts is therefore seen as an indicator of a healthy ecosystem and the removal of Samlesbury Weir should help in reversing their decline.

The aim of the removal was to promote natural river processes by improving the connectivity of the river system for fishes and sediment. Allowing free movement for the local and migratory fish species could improve the resilience of the fish population to extreme events, and rare and endangered species such as salmon, smelt and eels could benefit from the removal. Due to the impoundment of the water upstream of the weir, the riverine habitat there was degraded and removing the weir had the potential to improve the complexity of this area, leading to a greater abundance and diversity of invertebrates and other species.

There were also health and safety issues at the weir: it had become dangerous for members of the public, several of whom had slipped while walking on the weir and been seriously injured.

However, a concern was raised that the removal of the weir could be detrimental to water quality and lead to the loss of an ‘oxygenating feature’ in the river. In 2018, the Environment Agency carried out a study which found that, rather than adding oxygen to the water, the turbulence caused by the weir was allowing oxygen to escape.

Another study by the Environment Agency looked at the abundance and diversity of freshwater invertebrates upstream and downstream of the weir. The results revealed that the numbers of freshwater insects upstream of the weir were lower and less diverse which was not surprising since weirs are known to reduce the biodiversity and abundance of wildlife that might be expected upstream. It was hoped that weir removal would support increased insect life which would, in turn, benefit the fish, bird and bat populations that depend on it for food.

Preparation and planning for the works to commence took over twelve months. There were many procedures to go through before the actual removal could begin:

Prior to removal, it was intended that a fish rescue plan was to be implemented by the Ribble Trust under licence from the Environment Agency. Rescued fishes would be released a suitable distance upstream. However, due to the various dangers posed by deep water, slippery conditions and large sheets of metal sticking out from the riverbed, a fish rescue was ultimately deemed impracticable.

Given the exceptionally low river levels in the spring of 2020 and a long spell of dry weather, the Ribble Catchment Partnership took the decision to start work on removing the weir.

In May, excavators arrived at the site and began demolishing the concrete structure. A third of the length was dismantled first, followed by the remaining two-thirds, and the resulting concrete debris scooped out with an excavator. The removal took six weeks. A local, family-run company, the Wade Group, carried out the demolition. The company was keen to take advantage of the low water level which would significantly reduce the risk to its workforce who were required to enter the channel, and the favourable weather forecast at the time enabled the work to be done within a shorter time frame. 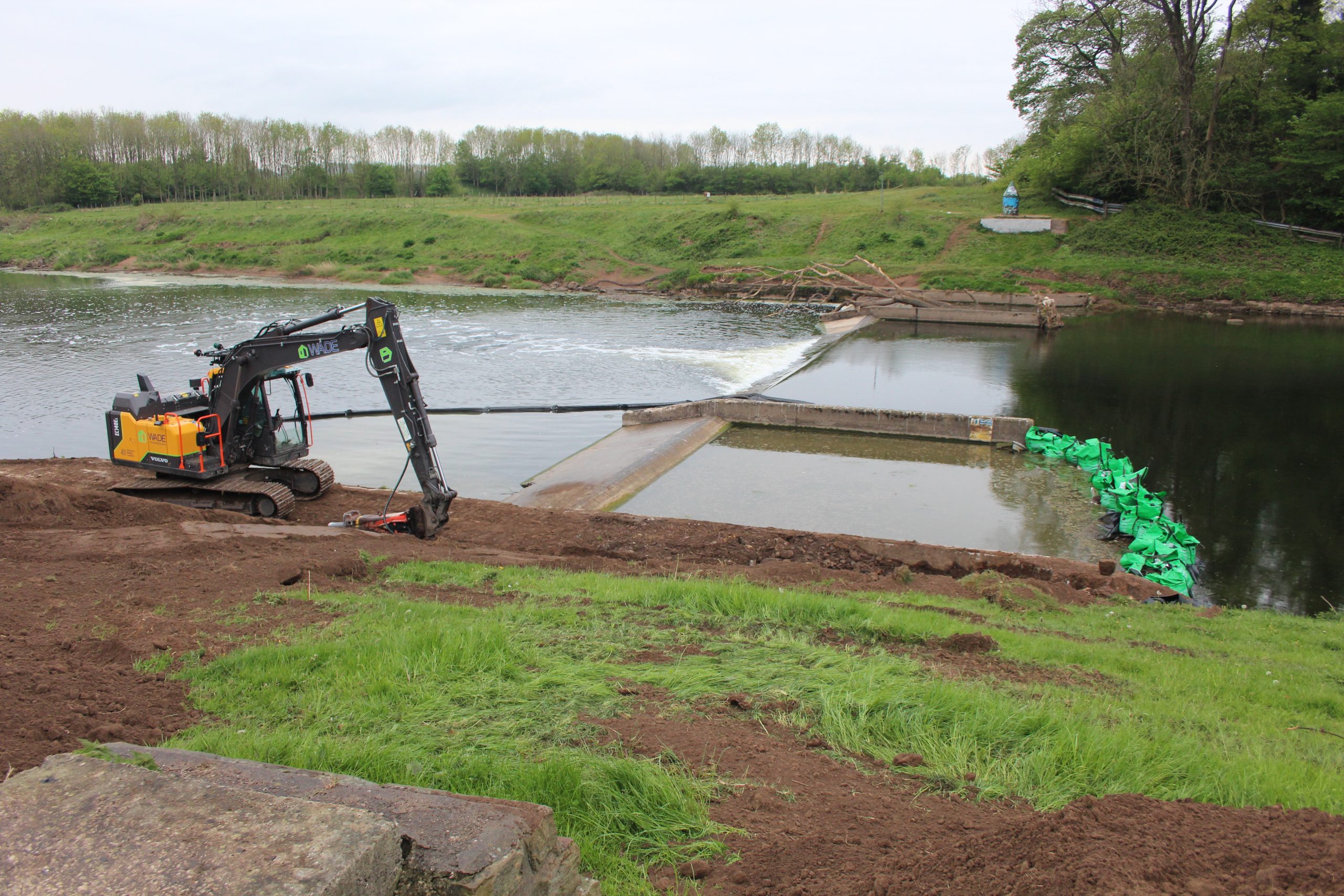 An excavator about to begin work with the silt curtain in place and a barrier of sandbags to contain broken concrete. 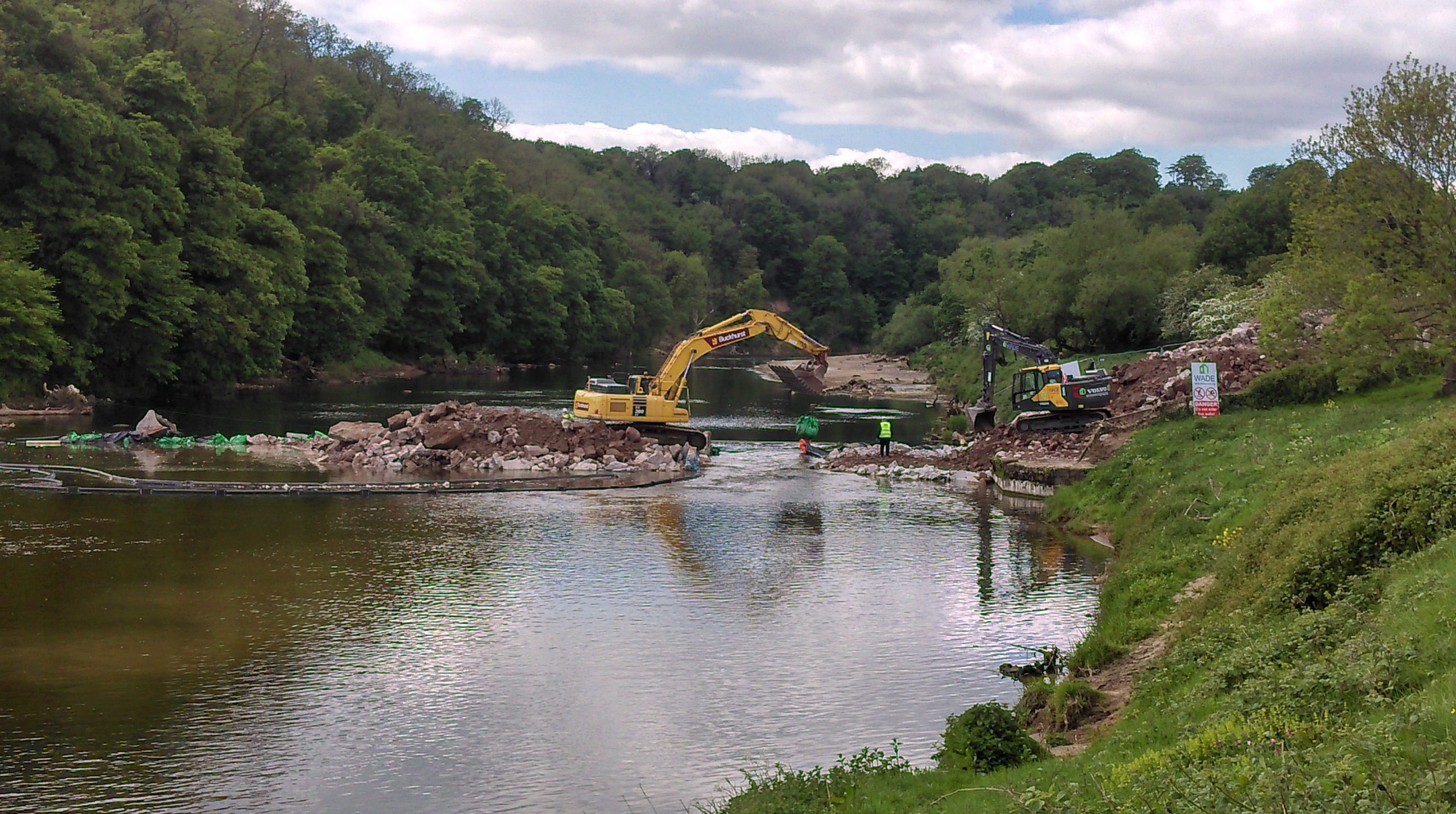 The work in progress – the left-hand third has been removed. 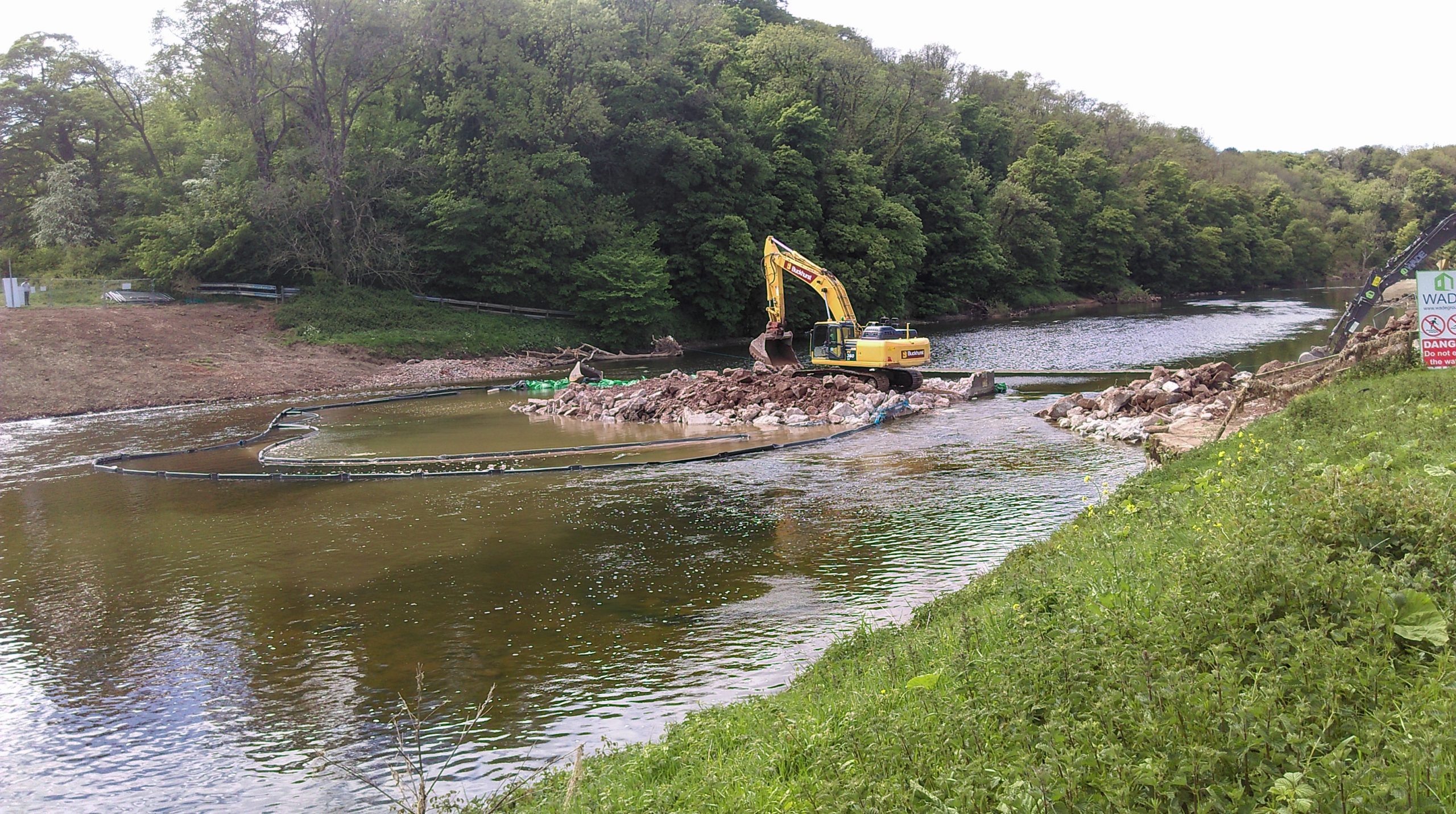 Downstream of the excavator, silt and debris are contained within the silt curtain.

Following the removal, the river banks adjacent to the weir site were re-profiled to mitigate against erosion. Trees will also be planted by the Ribble Rivers Trust, in co-operation with local angling clubs and the landowner, to increase the stability of the banks and improve riparian habitat. 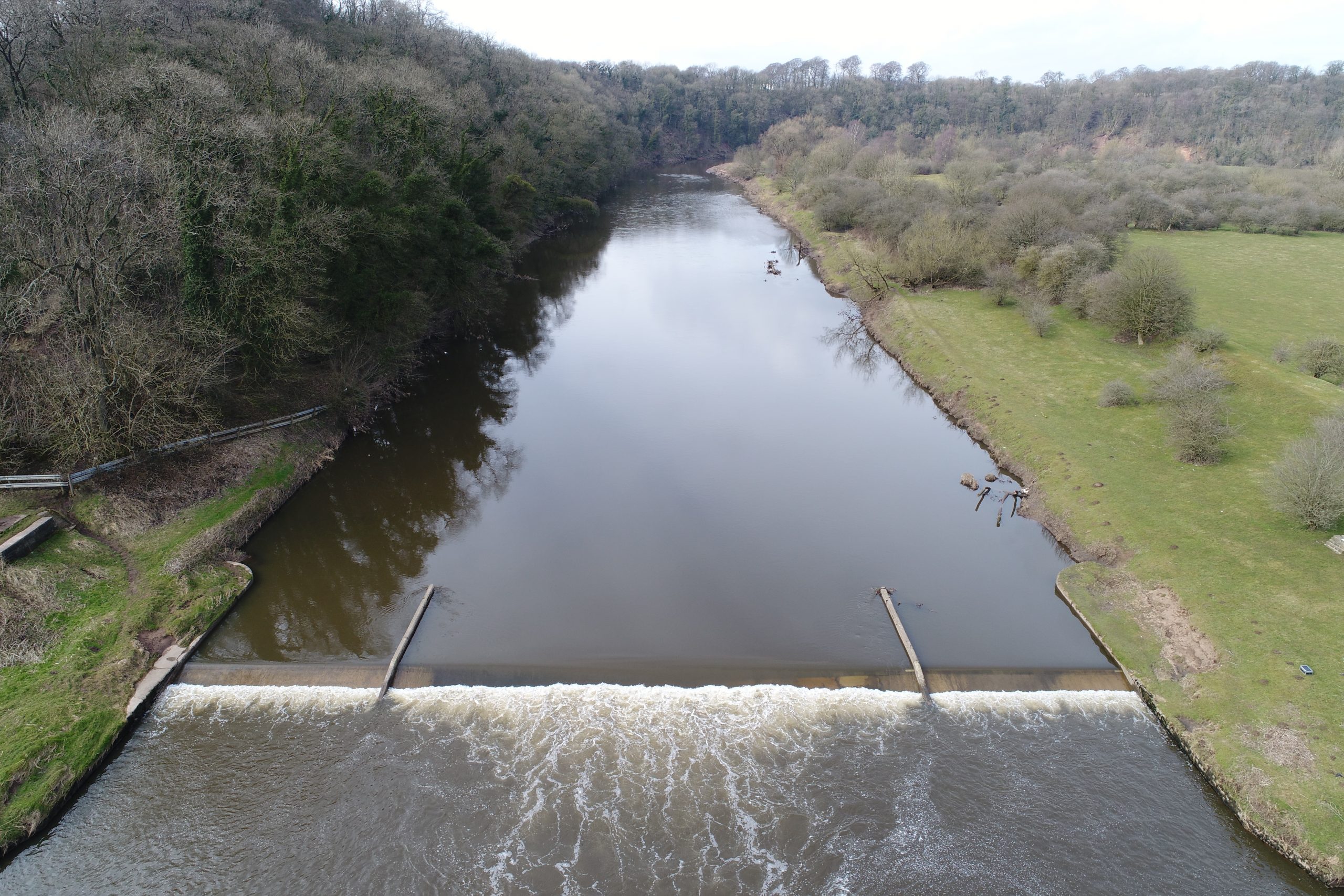 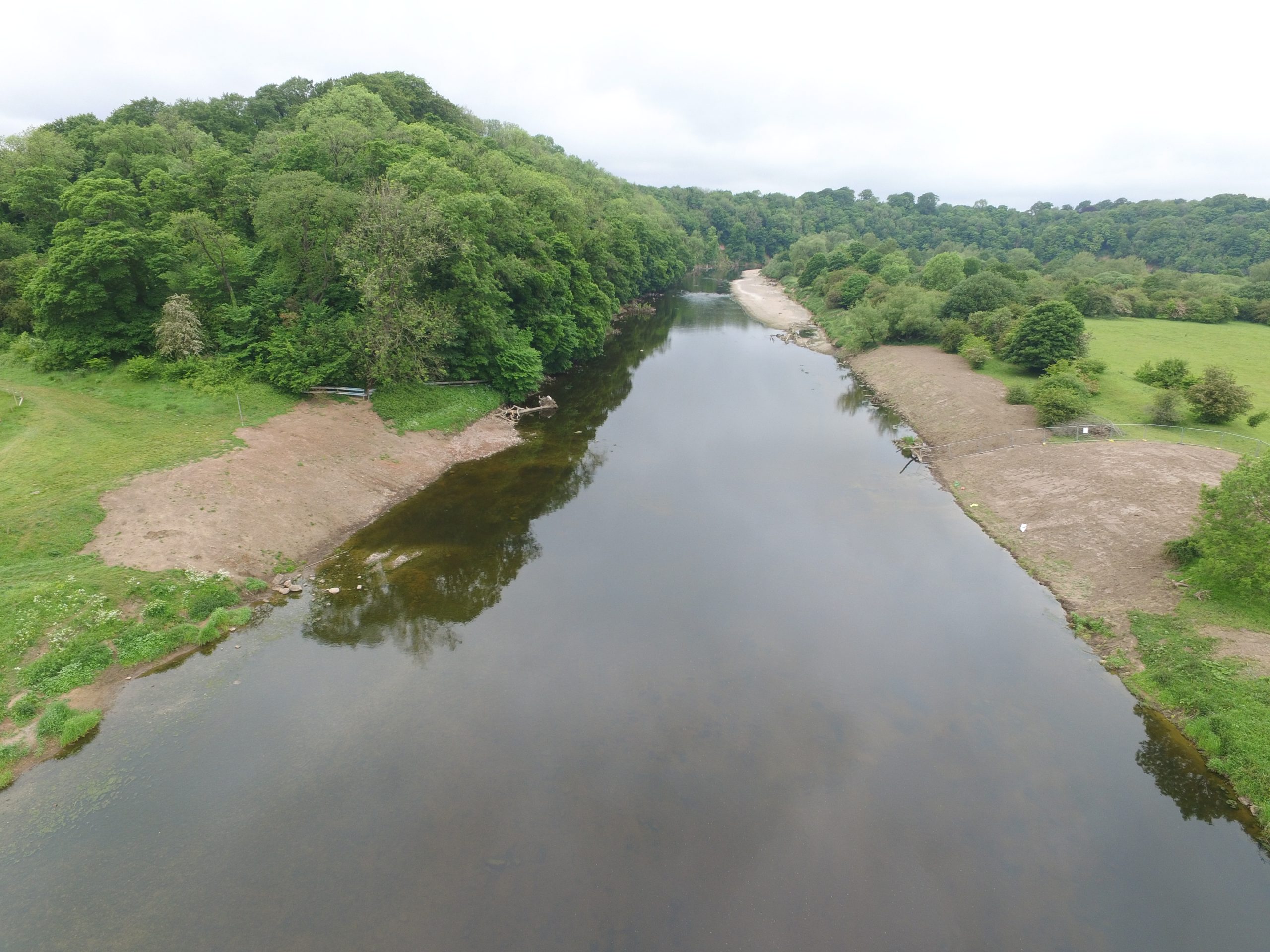 There were positive effects from the demolition of the weir only a few weeks after removal. Salmon, smelt, lamprey and eels were seen around the former weir site and a shoal of young salmon were observed further downstream.

The river has already commenced adjusting its morphology now that natural processes have been reinstated. On a recent visit to the site, we found the start of a new riffle feature forming upstream in what was previously the impounded section. This was what we were expecting and is exactly the kind of new habitat hoped for from the weir removal.

A local angler, who was sceptical of the project in the beginning, got in touch to say he was pleased with how beautiful it now looked. He hoped that the barbel and carp that had previously been trapped below the weir would be able to travel upstream to where he fished. 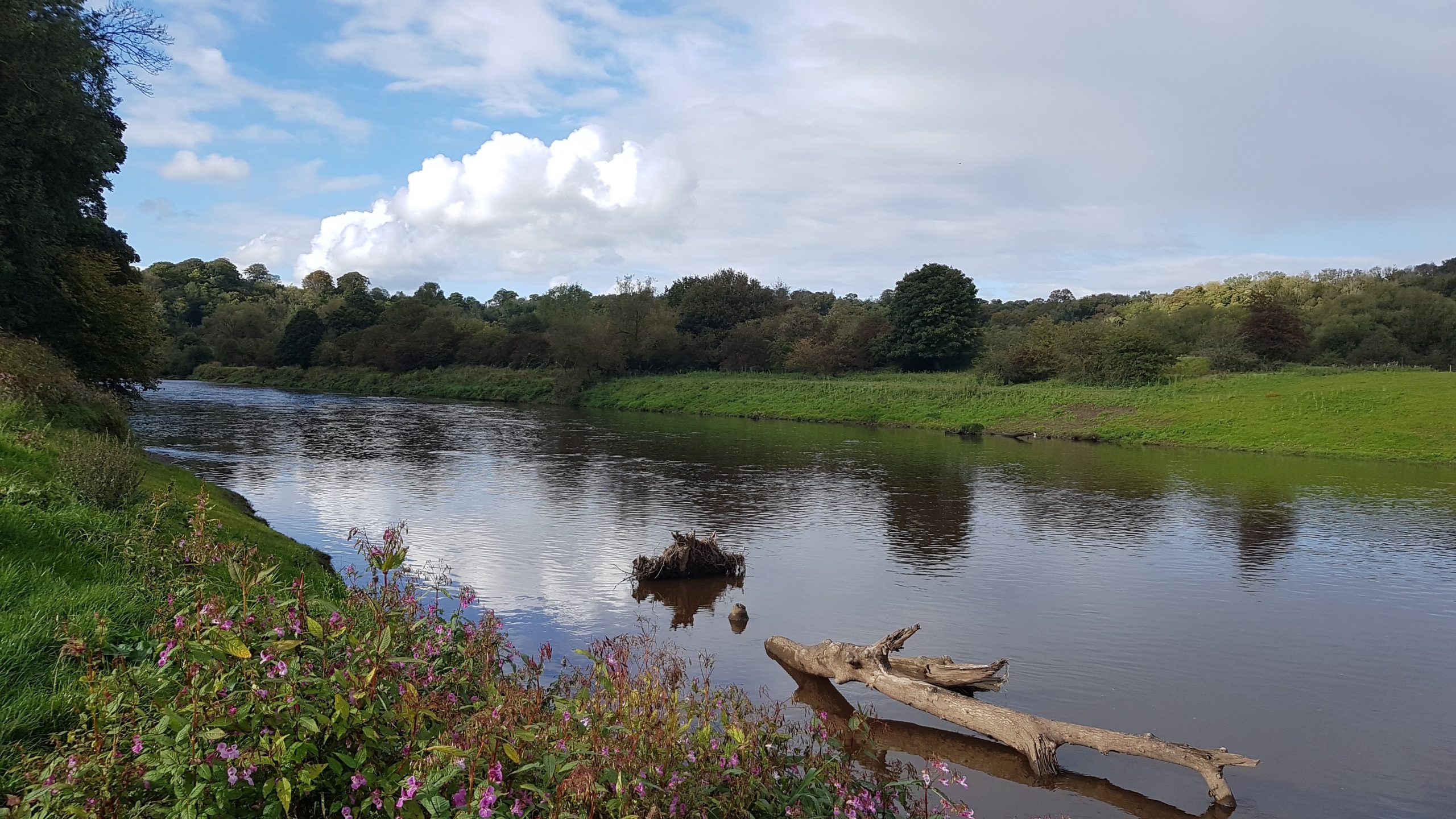 October 2020 – bankside vegetation has regrown at the work site.

Over the next twelve months, spontaneous developments will occur enabling the river to naturalise further, creating more diverse and varied habitats for fish and invertebrates.

The whole project has been underpinned by science, with our colleagues at the Environment Agency providing essential baseline data on oxygen levels, geomorphology and invertebrate populations.

In collaboration with the Agency, we will be carrying out extensive follow-up monitoring of invertebrates in 2021 to record the changes as they unfold.

With many thanks to Jack Spees, Susie Kinghan and Adam Wheeler at the Ribble Rivers Trust for information and photos.