Kent catchment is located in the county of Cumbria in north-western England and includes River Kent and its tributaries, rivers Gowan, Mint, Sprint, Gilpin and Winster (Fig. 1). It comprises a catchment area of 550 km2 and has a glacial origin. Historically, provided water to many mills, as well as mining and other industries, while nowadays faces numerous issues, like flooding, pollution, physical alterations and invasive species. 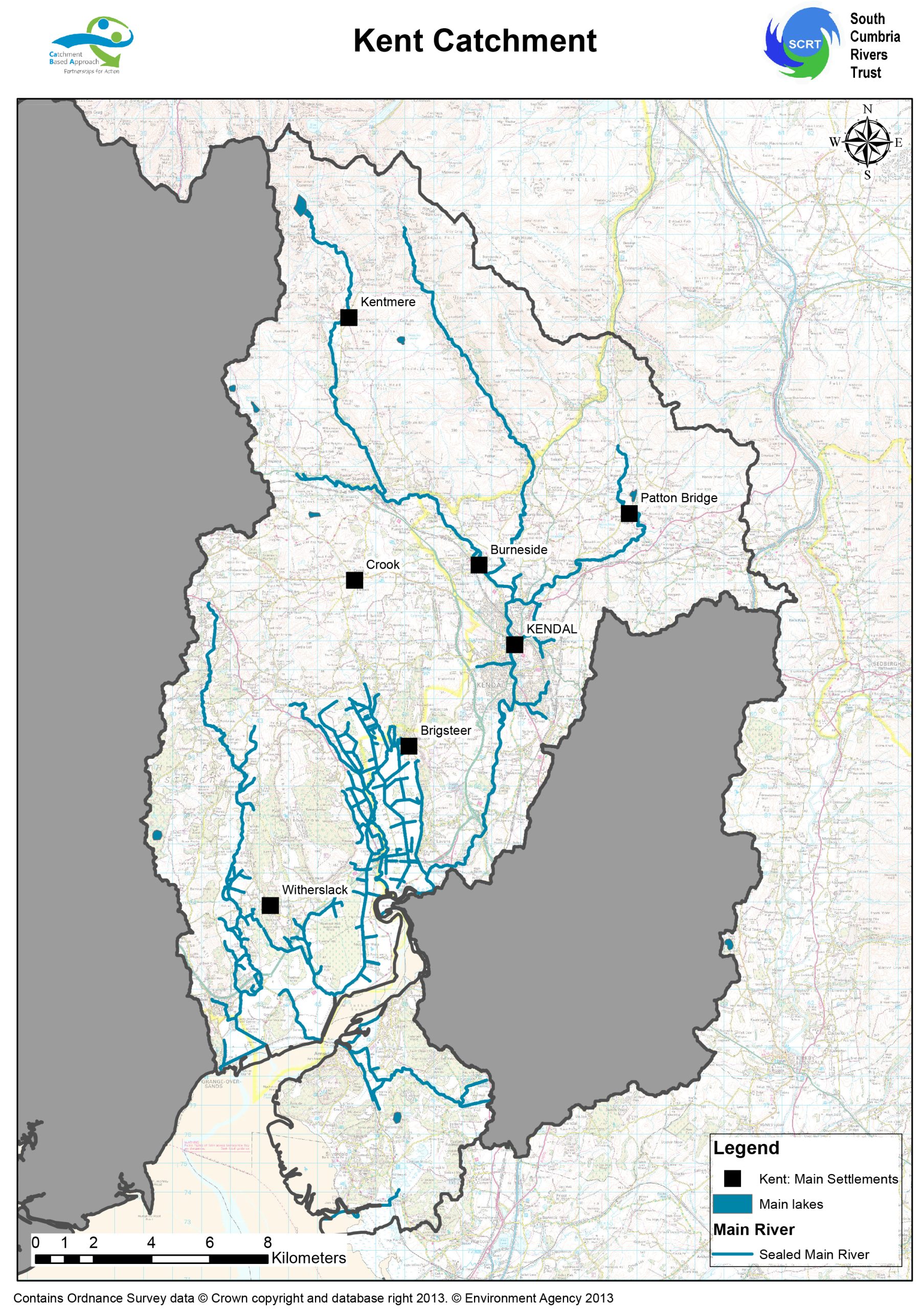 River Kent is the main water body of the Kent catchment. It springs from the hills surrounding Kentmere and runs for 32 km before flowing into the north of Morecambe Bay. Part of its estuary is within the boundaries of the Lake District National Park. River Kent is currently regarded a Site of Special Scientific Interest (SSSI) at a national level and a Special Area of Conservation (SAC) at an international level, mainly because it hosts populations of the native – and now endangered – white-clawed crayfish (Austropotamobius pallipes). A small population of the freshwater pearl mussel (Margaritifera margaritifera) also inhabits the Kent catchment. The latter species is internationally endangered and its populations in England have been declining since 1999. Other protected species that can be found within the Kent catchment include fish, like the bullhead (Cottus gobio), and plants, like the water crowfoot (Ranunculus aquatilis), the alternate-flowered water-milfoil (Myriophyllum alterniflorum) and the reed canary-grass (Phalaris arundinacea). Kent catchment hosts also populations of important game fish, like Atlantic salmon (Salmo salar) and sea trout (Salmo trutta).

Bowston Weir was one of the riverine barriers fragmenting River Kent (latitude: 54.364361, longitude: -2.775472), located at Bowston Bridge, Kendal, Cumbria (Video 1). It was a 37-m wide weir, made of concrete standing at 3 m high (Fig. 2). It appears to have been constructed in 1874 to provide water for the Bowston Mill, which was established to prepare rope and rags for the paper mills at Cowan Head and Burneside. Two fish ladders were installed later at the weir (Fig. 2 & 3). It has been suggested that the western of the fish ladders was constructed in 1948 and the other one in 1991. The former had 4 steps and was seemingly constructed of stone, while the latter was a two-step ladder made of concrete. Bowston Mill stopped operating in the 1960s and the site was redeveloped for housing purposes. Bowston Weir and some tanks on the east side of the river were the only remnants of that paper industry, since all the other constructions were removed during the renovation process. The weir was not regarded a designated heritage construction of local significance. 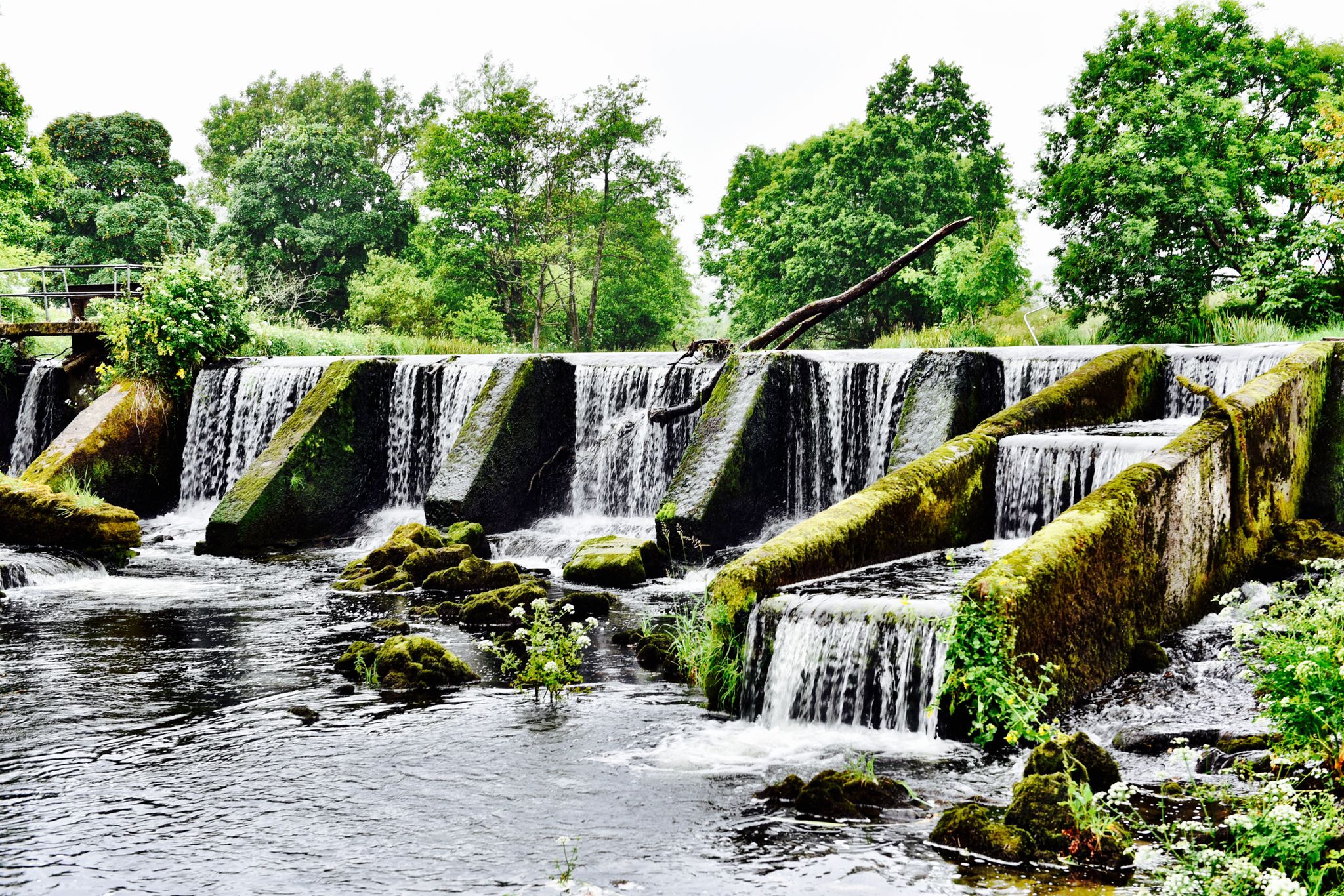 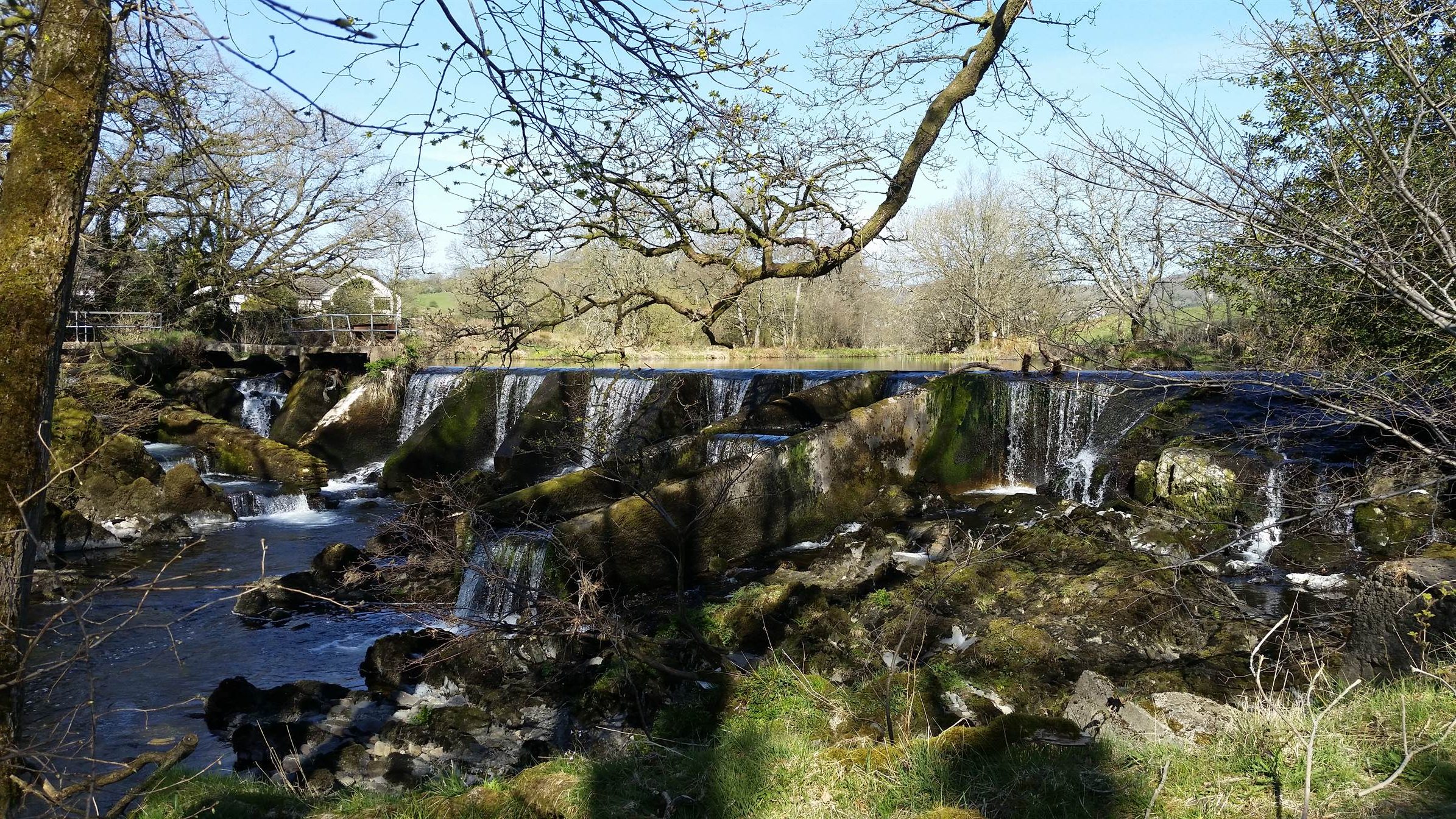 In 2010 a report commissioned by Natural England (Jacobs Fluvial Audit 2010) identified weirs – among other factors – as key pressures negatively affecting the conditions of River Kent catchment. Five years later, a follow up study, commissioned once again by Natural England, focused on 14 weirs, including Bowston Weir, fragmenting River Kent and its tributaries to assess their effects on river flow and sediment transfer. The weirs were ranked, and focus was given to the removal of Bowston Weir.

South Cumbria Rivers Trust (SCRT) leaded the removal of Bowston Weir. The project was carried out in collaboration with Environment Agency and Natural England and was executed within the framework of the Cumbria River Restoration program. It costed 545000 Euro, and the full removal was funded by the European Agricultural Fund for Rural Development. The main reason of the removal was the renaturalisation of this river stretch which provides a multitude of benefits, including improved river form and function, improved fish passage and reduced flood risk. Safety issues had also arisen, since weir’s sluice failed in 2016 and showcased that actions were needed to prevent future failures of this ageing structure.

”This was an amazing project that had been ear marked for completion by the Environment Agency and South Cumbria Rivers Trust for many years. It has now finally been completed and the results are absolutely epic! The project took years of planning, including some really difficult and challenging times on the way, but seeing it finally gone makes all that worthwhile in the end. This was a true collaborative project led by south Cumbria rivers trust delivering huge wins for both people and the environment.

SCRT initiated investigations into this project in 2017. The Project Proposal was submitted in spring 2019 and later that year the agreement with the landowner/structure owner was achieved. Years before the removal, the Local Community Engagement Plan emerged to inform, update and share information with all involved/interested parties during meetings that were organized periodically. The proposed plan of action presented by SCRT was approved in February 2022 by the South Lakeland District Council. The demolition works were assigned to Ebsford Environmental Ltd. In May 2022, SCRT commissioned Eden Heritage Ltd to undertake a Level 2 Historic Building Survey of Bowston Weir prior to its removal comprised by detailed photographs and descriptive text to serve as a permanent record of the structure. A Flood Risk Assessment was also carried out before the demolition works confirming that the removal would have a neutral effect on flood risk.

In June 2022, a rock rapid was installed downstream the weir for hydraulic control purposes (Fig. 4). The first 3-meter notch on the weir was removed on June 30 from the left-hand bank to allow upstream water level to decrease and enable further in-river works (Fig. 5; Video 2). Removal works were completed by the end of July 2022 (Fig. 6). This was the largest weir removal executed in 2022 in England, under the guise of river restoration. 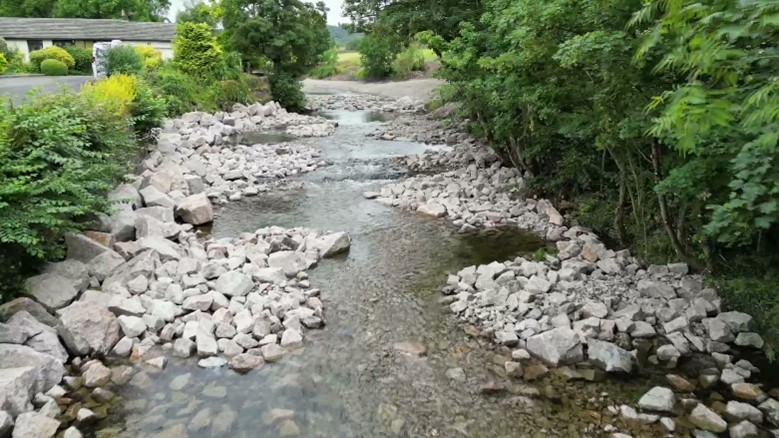 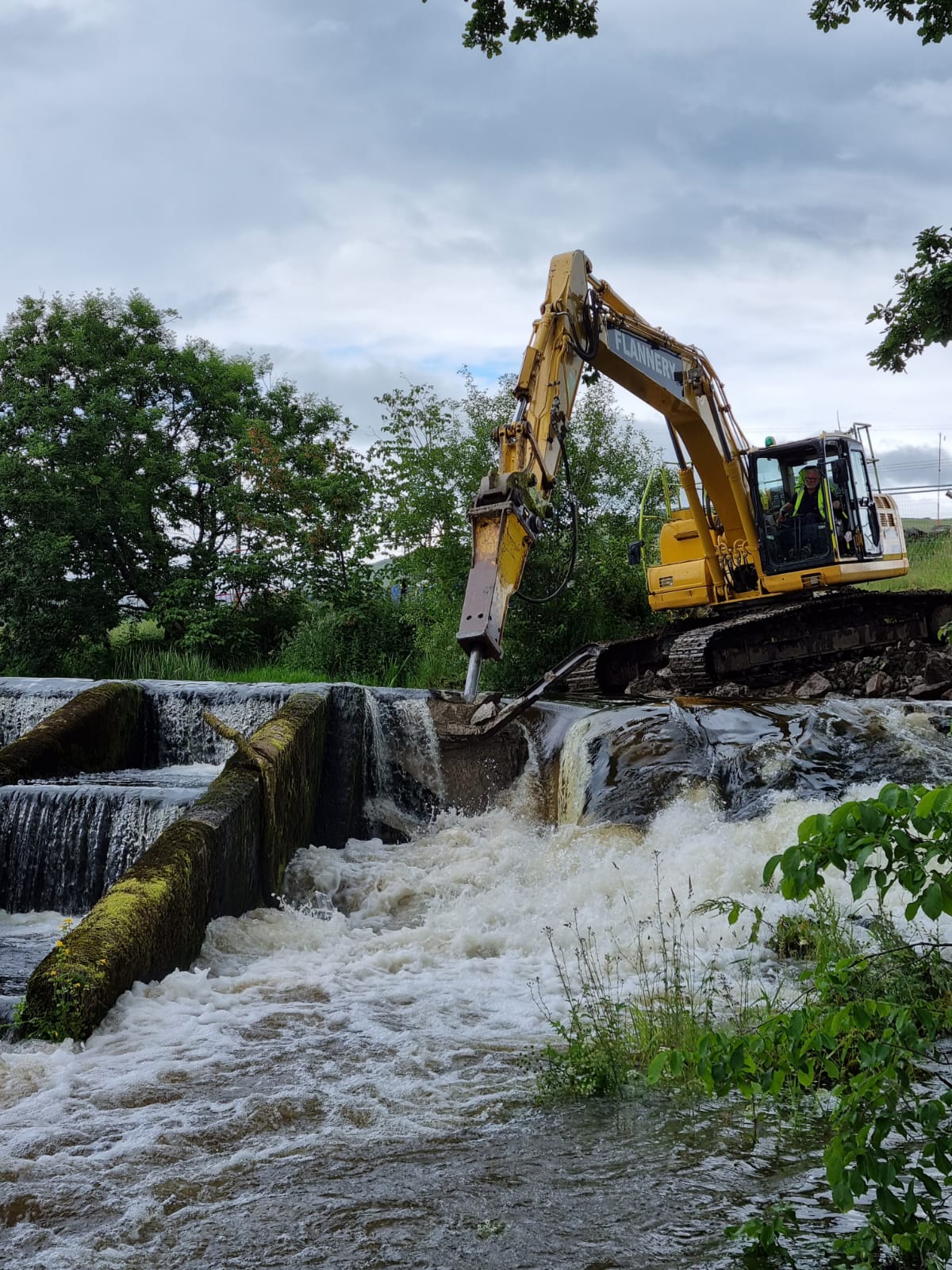 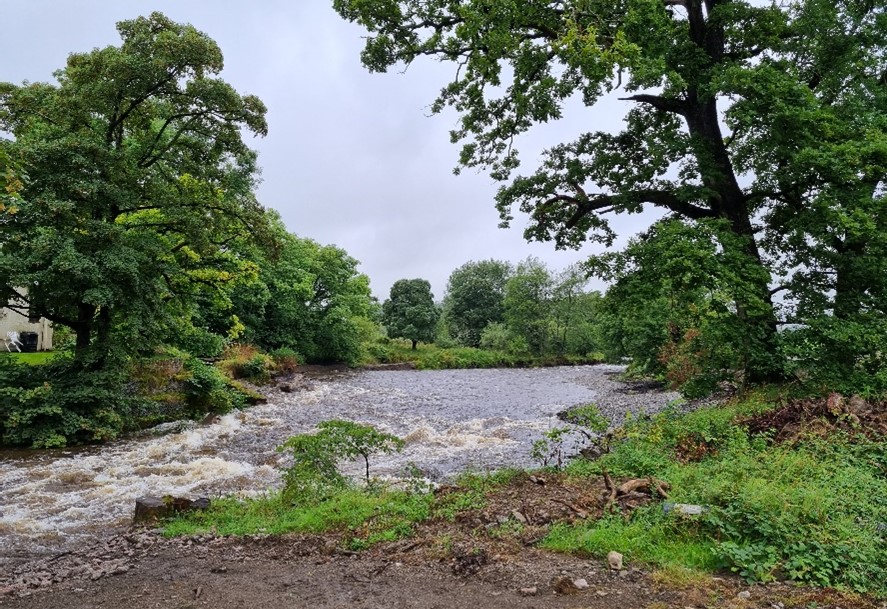 Removal of the Bowston Weir will allow the river to return to a more natural condition as it re-adjusts to 150 years of being constrained. It will eventually form into a natural lakeland river, with pools and riffles benefiting wildlife including aquatic invertebrates, fish, birds and plants and improving fish migration. The provided biodiversity gain was estimated to be at 44%. Flood risk will also be decreased by the removal and all safety hazards by the ageing structure will be eliminated.

”This weir removal project has been a long and difficult journey, with many barriers faced and overcome. Thanks need to go to the landowners, farmers Michael and James Batty and family for their support throughout, as well as the structure owners James Cropper PLC for granting permission for the weir to be removed. Immediately following removal of the weir, the river reacted fantastically and now this stretch manifests its true nature as a magnificent Lakeland river…The river is the winner!

Bowston Weir removal will improve the conditions of SAC/SSSI River Kent, and this will be documented through post-removal monitoring. Such data will provide evidence of the benefits of such restoration actions and enable funding for more removals on River Kent catchment. The site will continue to renaturalise over time as natural processes start to shape this stretch of river. Fencing has been installed on the left-hand bank and mitigation tree planting will take place during winter 2022/23. Monitoring started by the completion of the removal and will continue until spring of 2025.

Dam Removal Europe (DRE) was present for the opening of the first notch of Bowston Weir to celebrate this riverine barrier removal. This project was also the main theme of the 2nd DRE Café webinar that was organized a day before the demolition works started. On behalf of SCRT, project manager Peter Evoy was interviewed from the removal site (Fig. 7) and explained the timeline and the scope of this project and the expected benefits. The news of this removal were also reported by The Guardian. 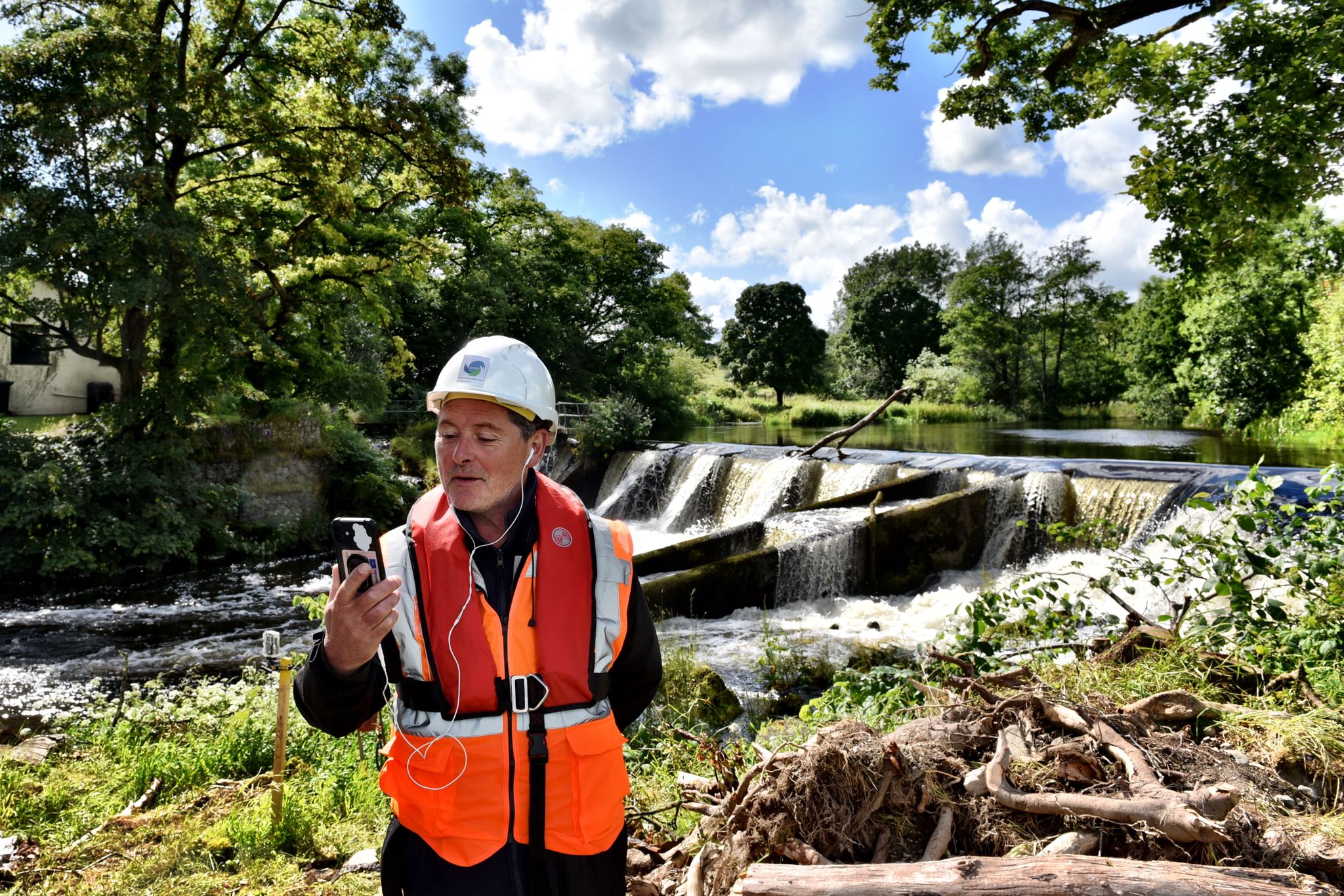 Figure 7. On behalf of South Cumbria Rivers Trust, Pete Evoy, project manager of the Bowston Weir removal during his interview for the 2nd DRE Café (photo by Tim Wanningen)

Jeremy Wade, host of “River Monsters”, the most watched show in Animal Planet’s history for nine straight seasons was also interviewed during the webinar (Fig. 8) and shared his thoughts and hopes of this project and the barrier removal movement around Europe. On the site Jeremy Wade also filmed a video to highlight the significance of this project for the Kent River (Video 3). The film was produced by World Fish Migration Foundation, Environment Agency, South Cumbria Rivers Trust and partners and has already reached ~140000 views. 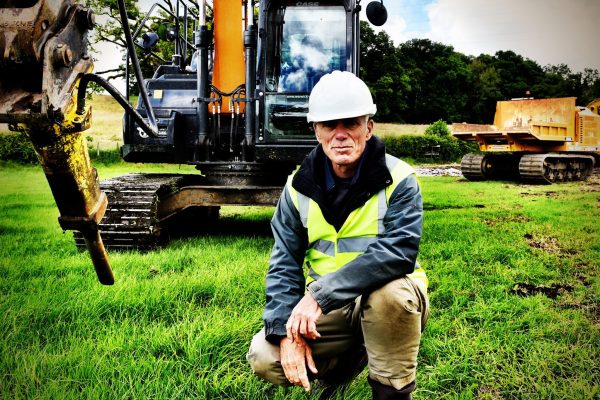 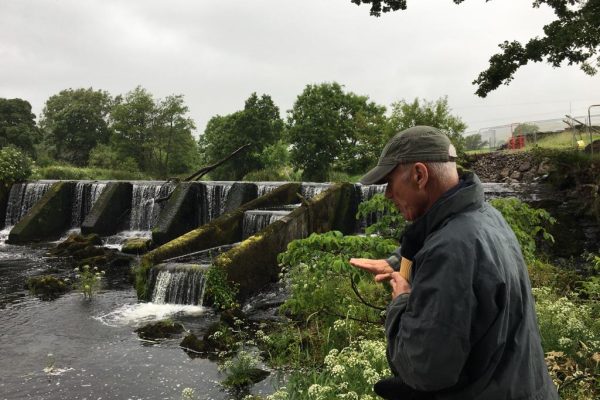 Figure 8. Jeremy Wade on the Bowston Weir removal site during his interview for the 2nd DRE Café (photos by Tim Wanningen)

The Cumbria River Restoration Strategy won the prestigious European River Prize in November 2022 at the 25th International River Symposium in Vienna. Bowston weir removal was one of 100 projects with various partners all working hard to renaturalise rivers across Cumbria. 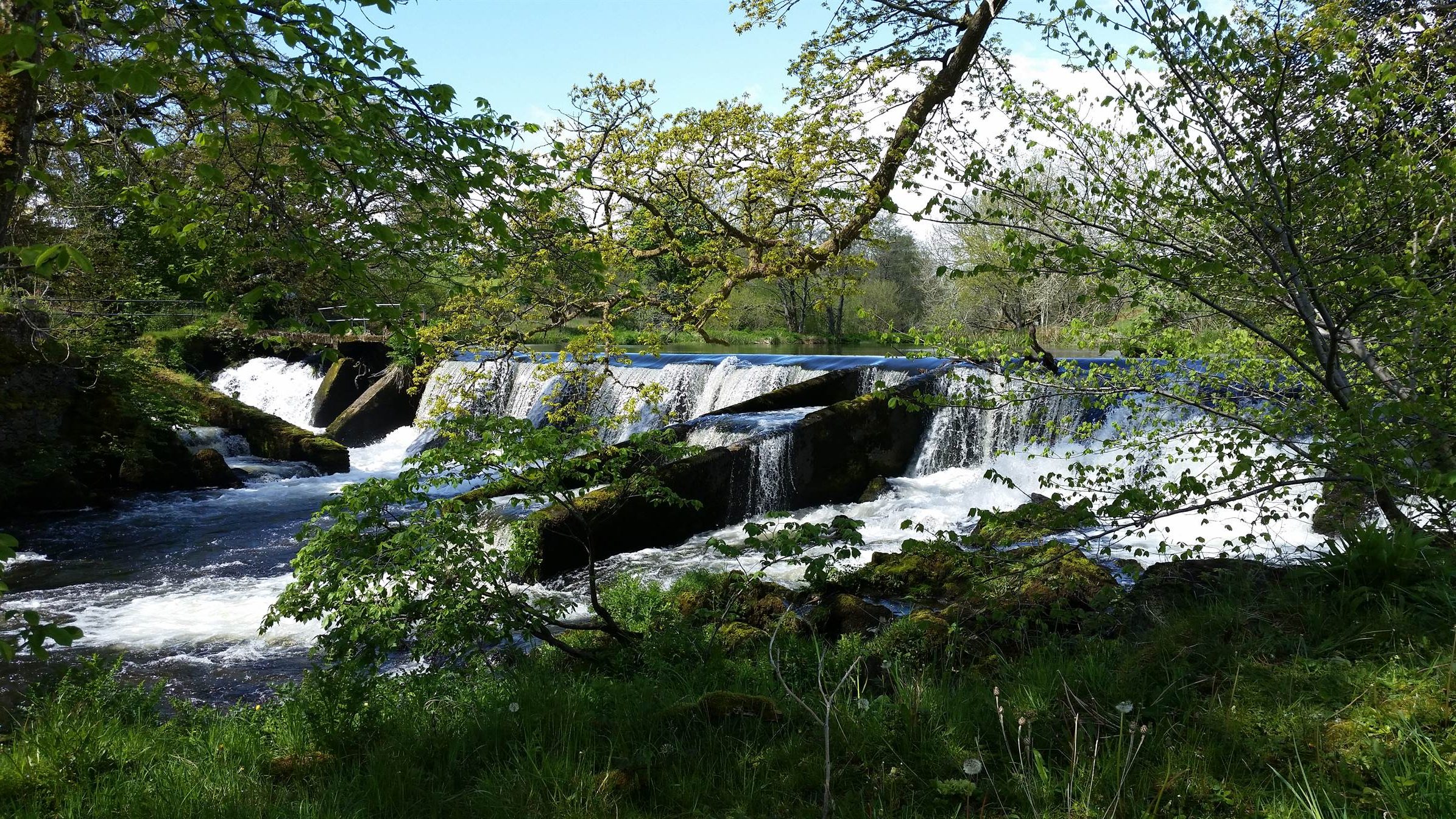 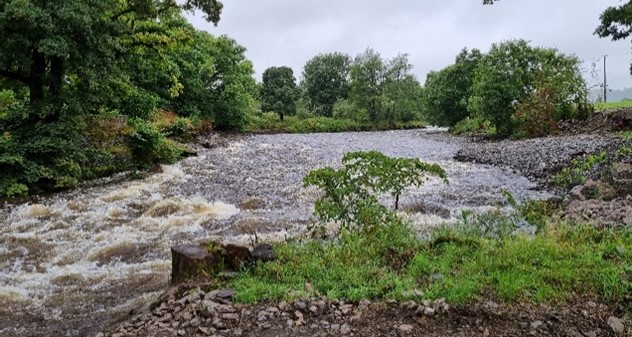 The removal site at River Kent: (left) before and (right) after the removal operations of Bowston Weir (photos by South Cumbria Rivers Trust)

With many thanks to SCRT for providing the information and photographs presented herein.