River Ecclesbourne
Ecclesbourne catchment is located in Duffield, near Derby, central England (Figure 1) and covers an area of 60 km2. River Ecclesbourne rises above the town of Wirksworth, is 28-km long, including its tributaries, and runs into River Derwent, then to River Trent and the North Sea. The Derwent is regulated by riverine barriers, such as weirs, and the resulting fragmentation of its longitudinal connectivity has led to the disappearance of Atlantic salmon (Salmo salar) from the river’s headwaters and the River Ecclesbourne as well. Other fish species inhabiting these two rivers and that have been affected by these barriers include Brown trout (Salmo trutta), grayling (Thymallus thymallus), barbel (Barbus barbus), chub (Squalius cephalus), dace (Leuciscus leuciscus), minnow (Phoxinus phoxinus), bullhead (Cottus gobio) and brook lamprey (Lampetra planeri). 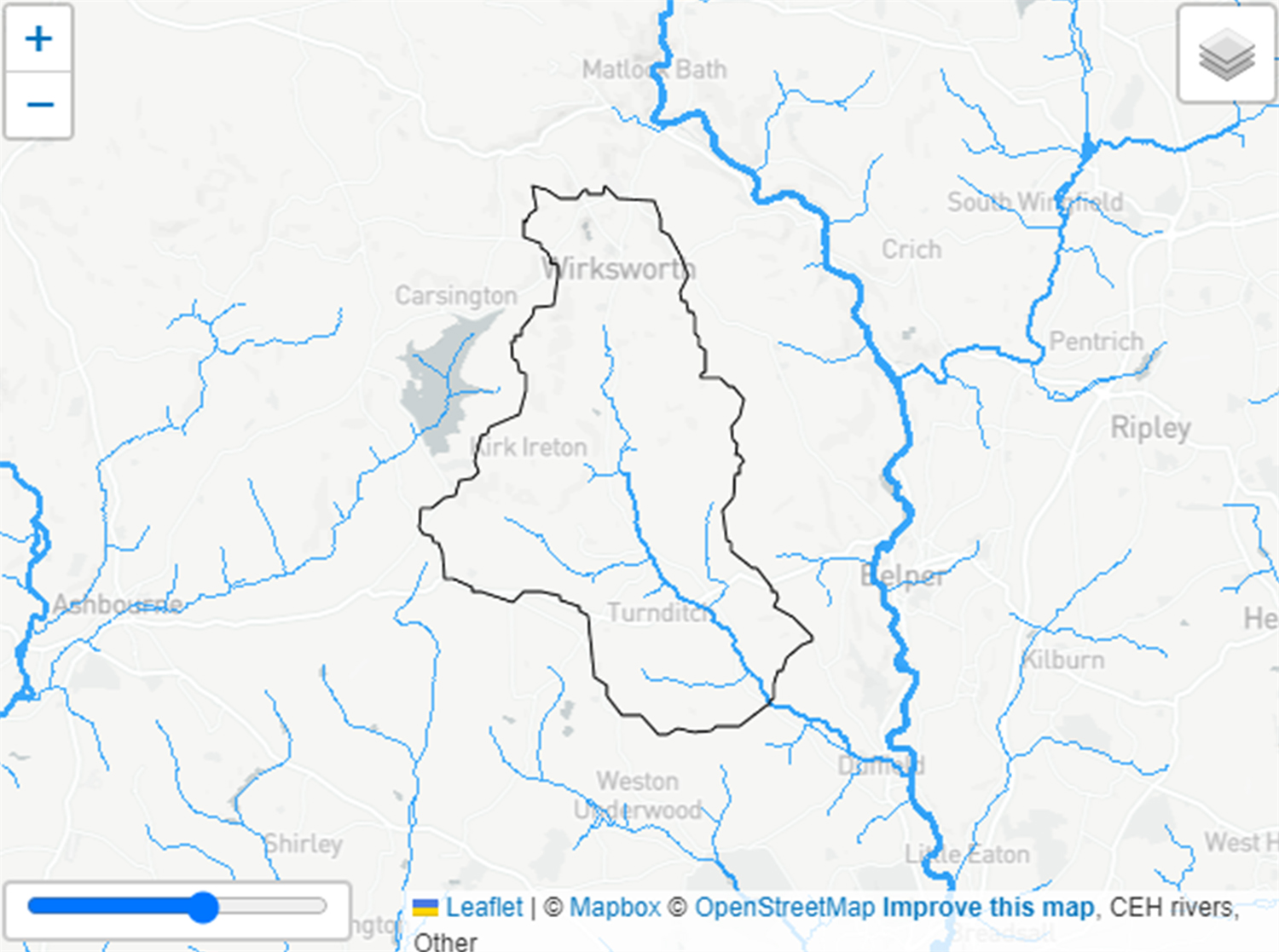 In 2013 fishways were built on two barriers on the lower River Derwent to improve both its longitudinal connectivity and fish passage. Promising results were observed in August 2017 when four salmon juveniles (called parr) were caught by Environment Agency from River Ecclesbourne at Duffield (Figure 2). The latter fish were the first salmon seen in the river for hundreds of years. Subsequently, the first adult salmon was caught accidentally by angling a month later (Figure 2). The news was received with enthusiasm and disseminated by local and national press. The return of salmon in rivers Derwent and Ecclesbourne has since been confirmed by the observation of spawning nests (called redds) on the riverbed (Video 1) which have been counted (8-12 per year in average) and mapped annually by Environment Agency since 2018 (Figure 3). 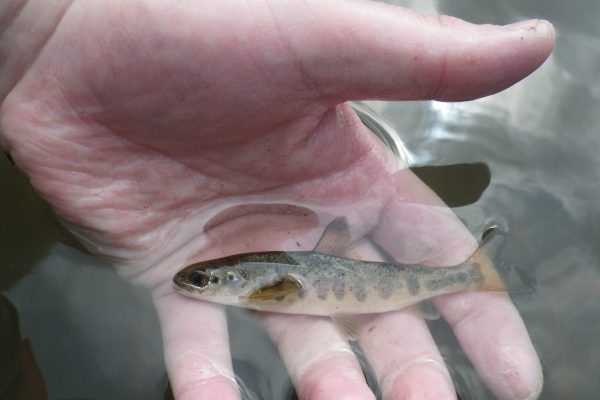 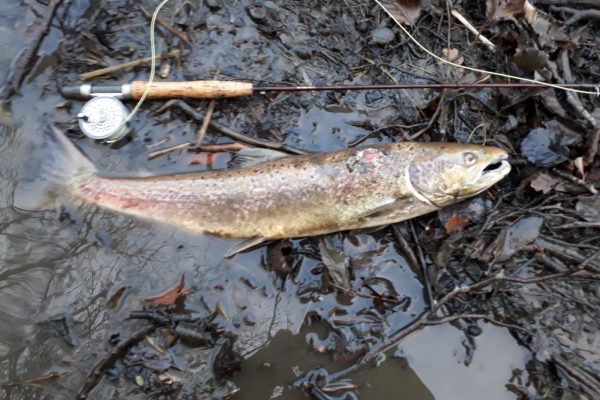 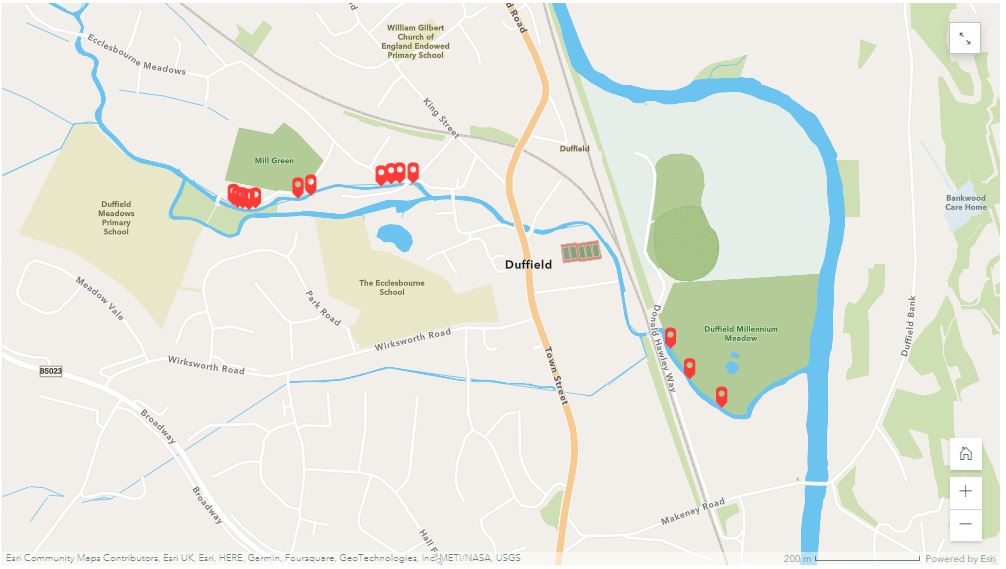 Snake Lane Weir
There were two barriers fragmenting River Ecclesbourne, Postern Mill Weir and Snake Lane Weir (Figure 4). The latter was located in Duffield (latitude: 52.987689, longitude: -1.496564) and was the most downstream barrier in the river. It was 2.5 m high, 10 m wide, made of concrete (Figure 5) and was built in the 1970s during a flood alleviation scheme, replacing an older structure used by a former corn mill. Snake Lane Weir was insurmountable to salmon and other fish species (Video 2), and its detrimental effects on fish migration have been evidenced over the past twenty years by surveys reporting only eight fish species above the weir, whilst sixteen species were observed downstream of it. 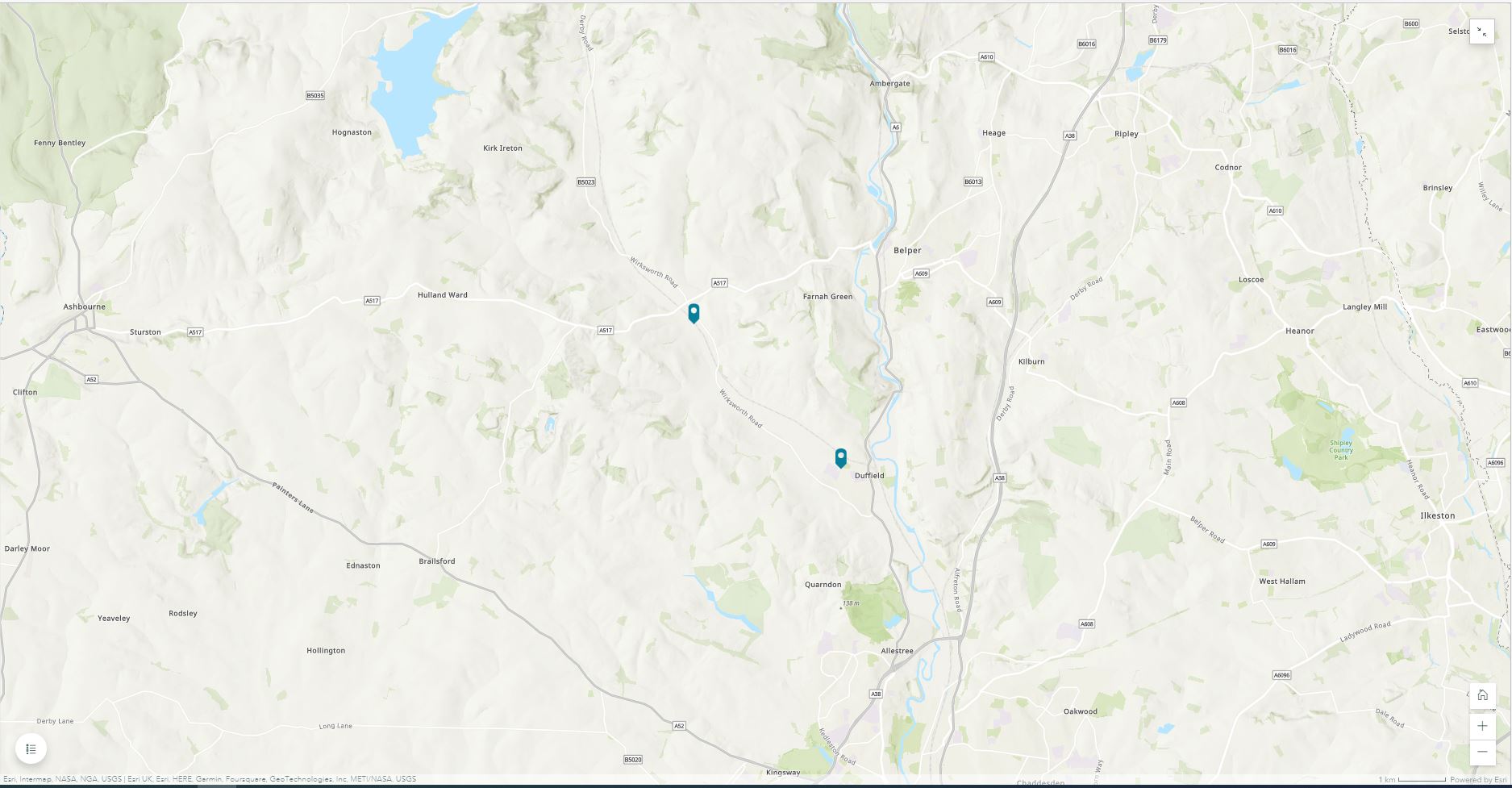 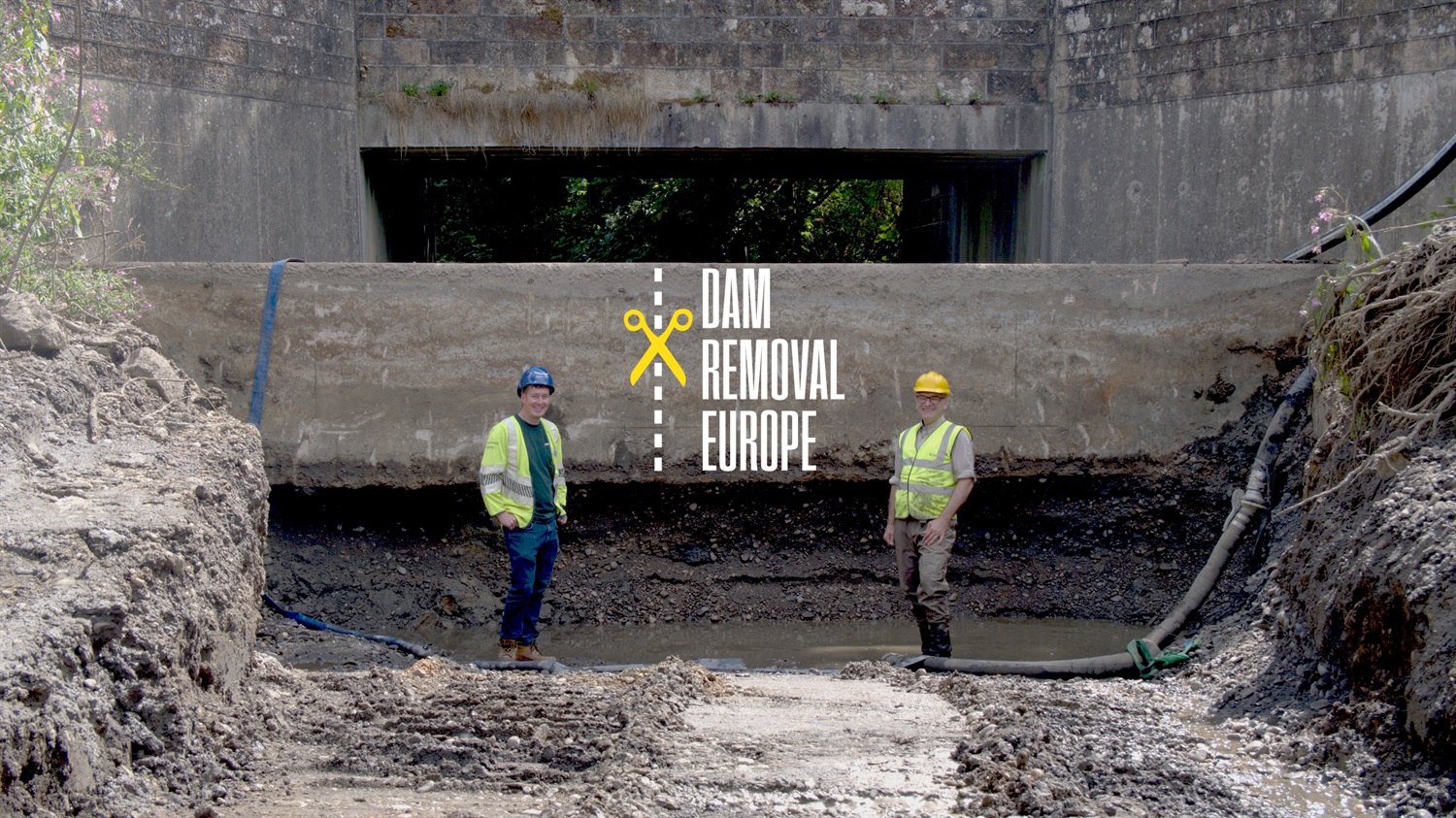 Video 2. Snake Lane Weir at River Ecclesbourne was an insurmountable barrier to fish, such as Brown trout (video by Ryan Taylor)

Barrier removal process
The objective of the Snake Lane Weir removal project was to open 10 km of habitat for fish species. Planning and the design process, including flow modelling and flood risk assessment, began in February 2019, while the in-river demolition work took place between July and October 2022. Fish were caught at the weir site prior to its demolition and transferred downstream of the removal site (Video 3). Subsequently, the water was diverted from the weir site through a secondary channel, legacy of the old corn mill, leaving the demolition site dry (Figure 6).

Video 3. Fish rescue prior to demolition of the Snake Lane Weir at River Ecclesbourne (video by Helen Campbell, Ace Nature) 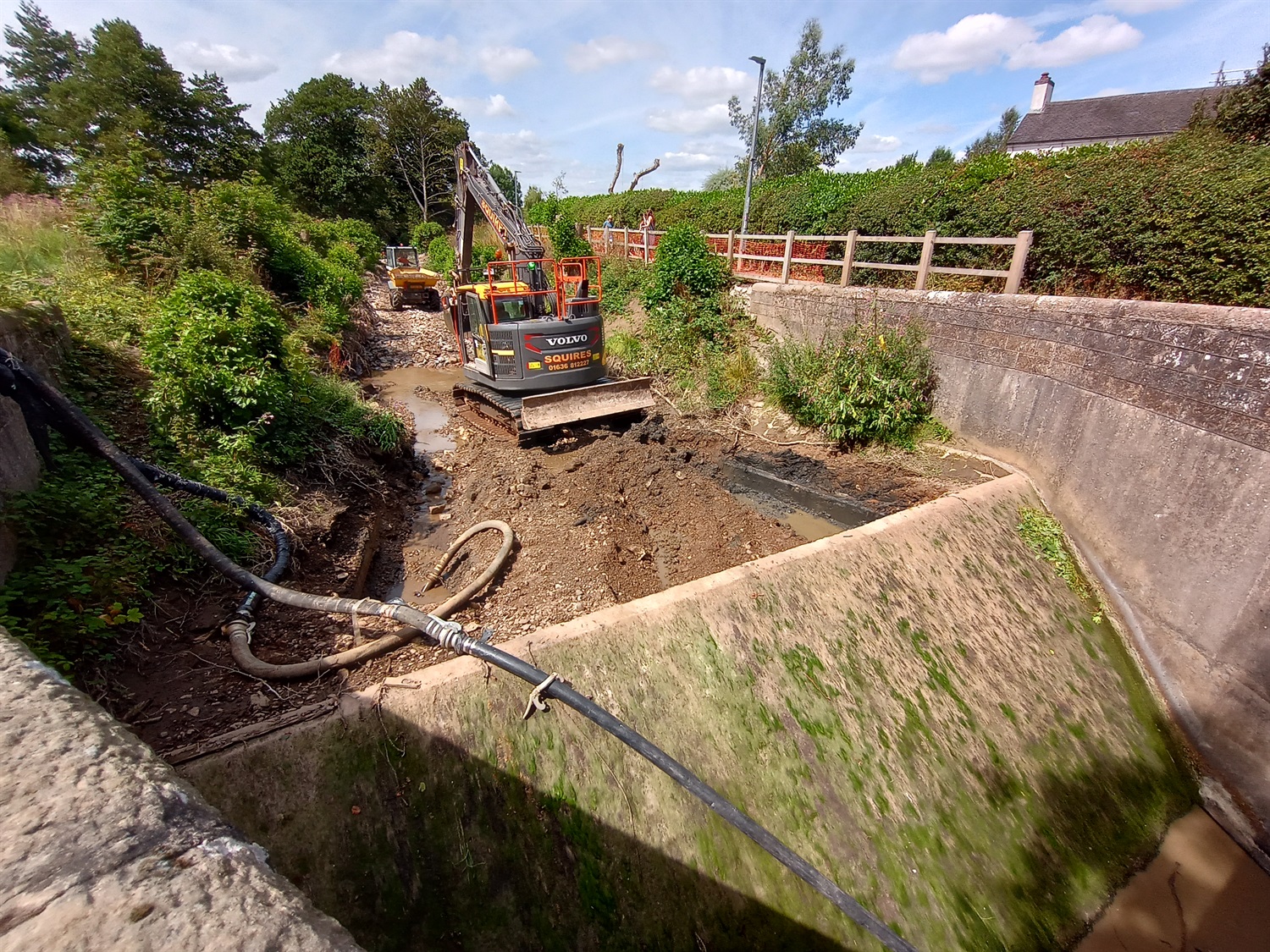 Figure 6. Excavating sediments behind Snake Lane Weir prior to its removal at River Ecclesbourne (photo by Wild Trout Trust)

The weir was cut by specialist diamond cutting equipment allowing the removal of the concrete structure piece by piece (Figure 7; Video 4), which was the safest way in this publicly accessible site. This method of working also left the sides of the former weir and the adjacent bridge and walls intact (Figure 8). Five riffles/rapids were then constructed on site using boulders and large rocks (Figure 9; Video 4) to maintain the previous water flow split between the main and the secondary channel. One was created downstream the weir site, three upstream of it and the last one in the secondary channel. 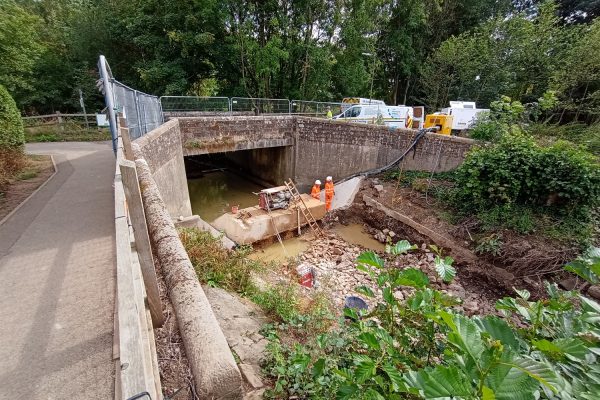 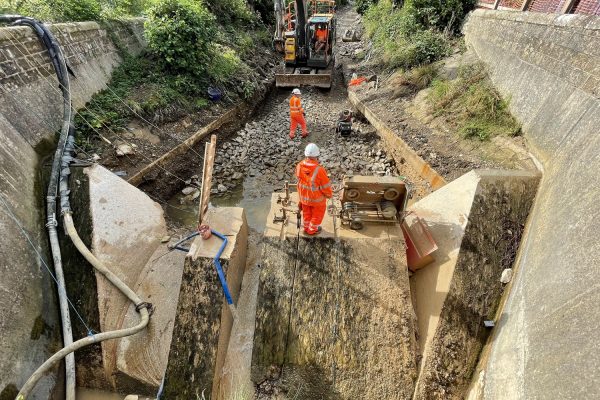 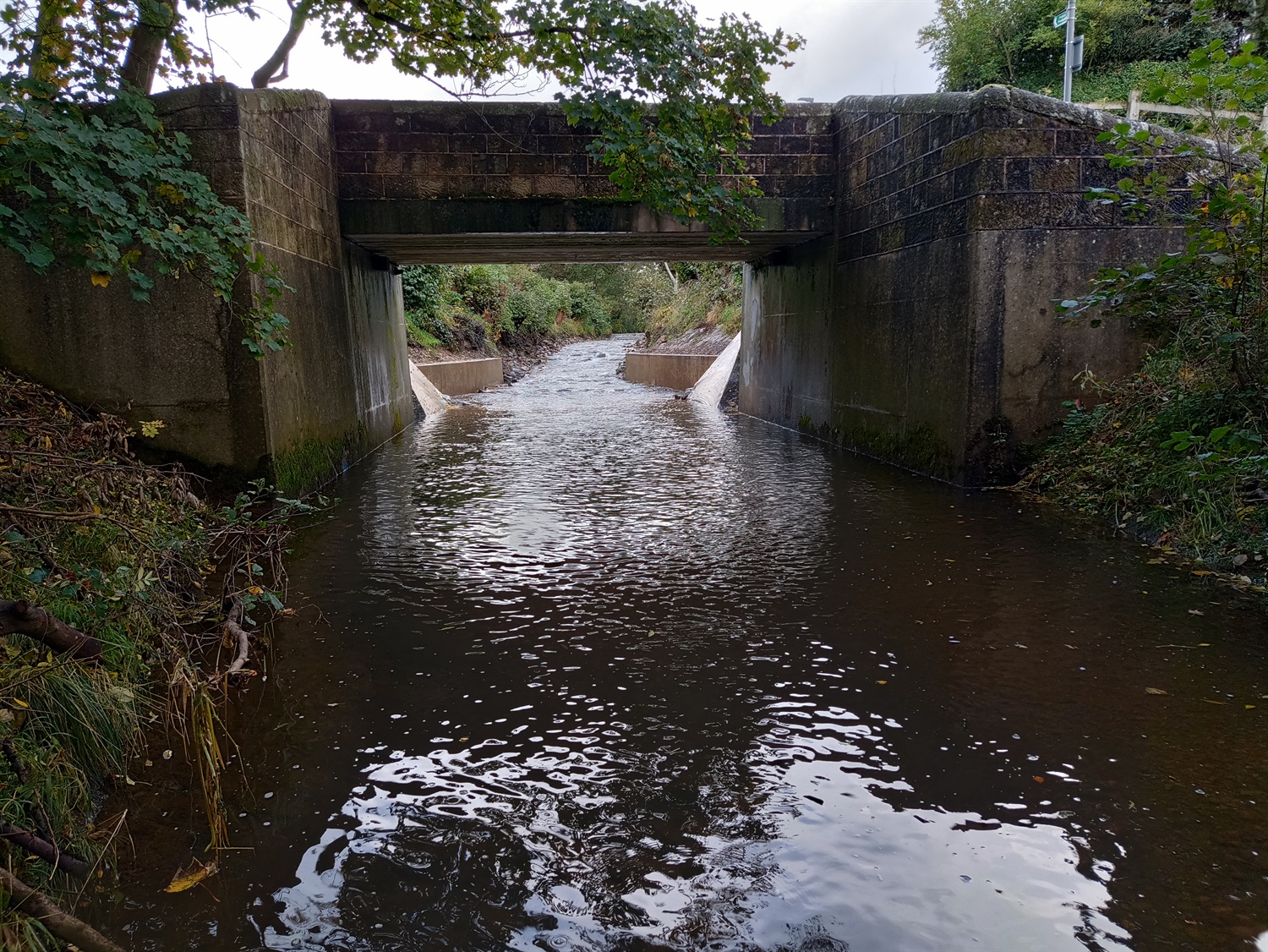 Figure 8. Removal site after the completion of the Snake Lane Weir demolition at River Ecclesbourne (photo by Wild Trout Trust) 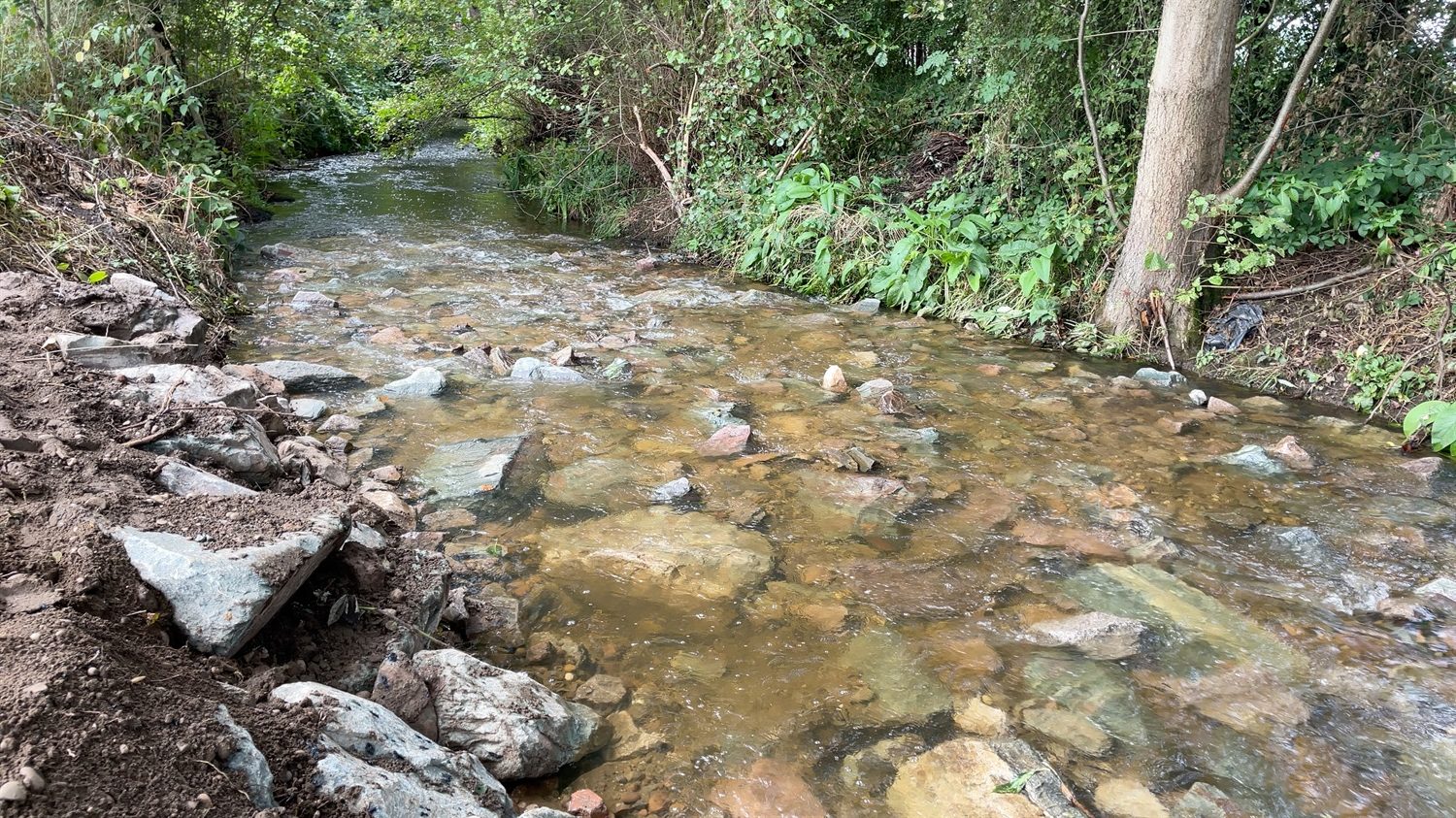 After completion of the weir removal, slumping of the riverbank occurred a short distance upstream during high flows, where the riverbed level has been lowered the most. This was despite trees having been removed prior to the project to reduce the weight bearing on the bank in this location. This risk had been anticipated during project planning and a contingency budget provided. Remedial works were carried out to reinforce the banks using galvanized steel piles and stone – unfortunately an artificial solution, but necessary because of the steep gradient and high flow energy at this point (Figure 10). 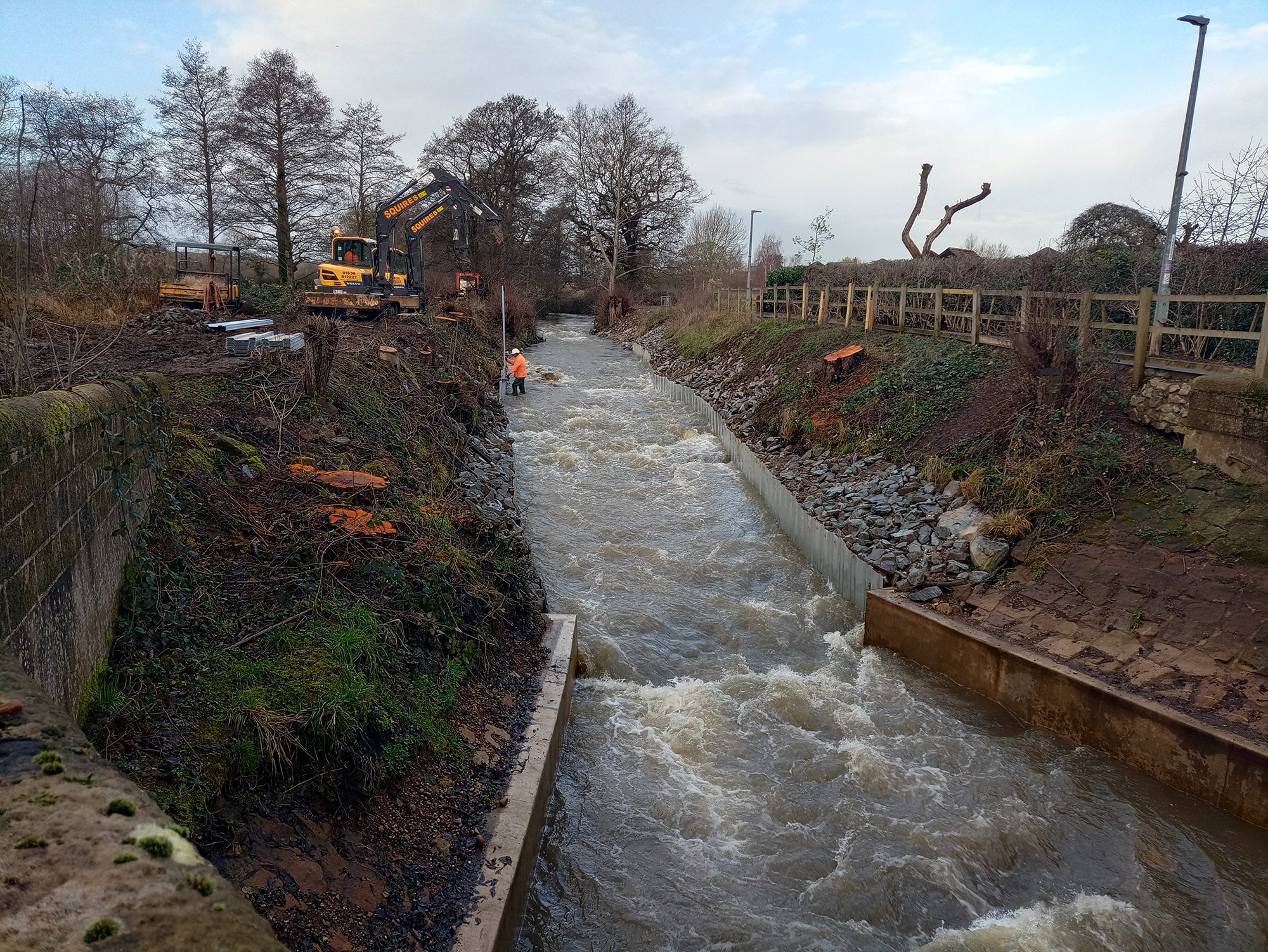 Ecological and community benefits
The ecological benefits of the Snake Lane Weir removal are already evident. Atlantic salmon returned to spawn above the site of the former weir only months after its demolition, as concluded by reports of remains of post-spawning salmon (Figure 11).
Within the framework of the Ecclesbourne Restoration project, engaging and educational activities are organized, like local schools holding events and lessons about rivers and wildlife. The establishment of citizen science projects to map habitats, record wildlife and record salmon redds, and of a meaningful connection between the residents and the river are also among the goals of the project. 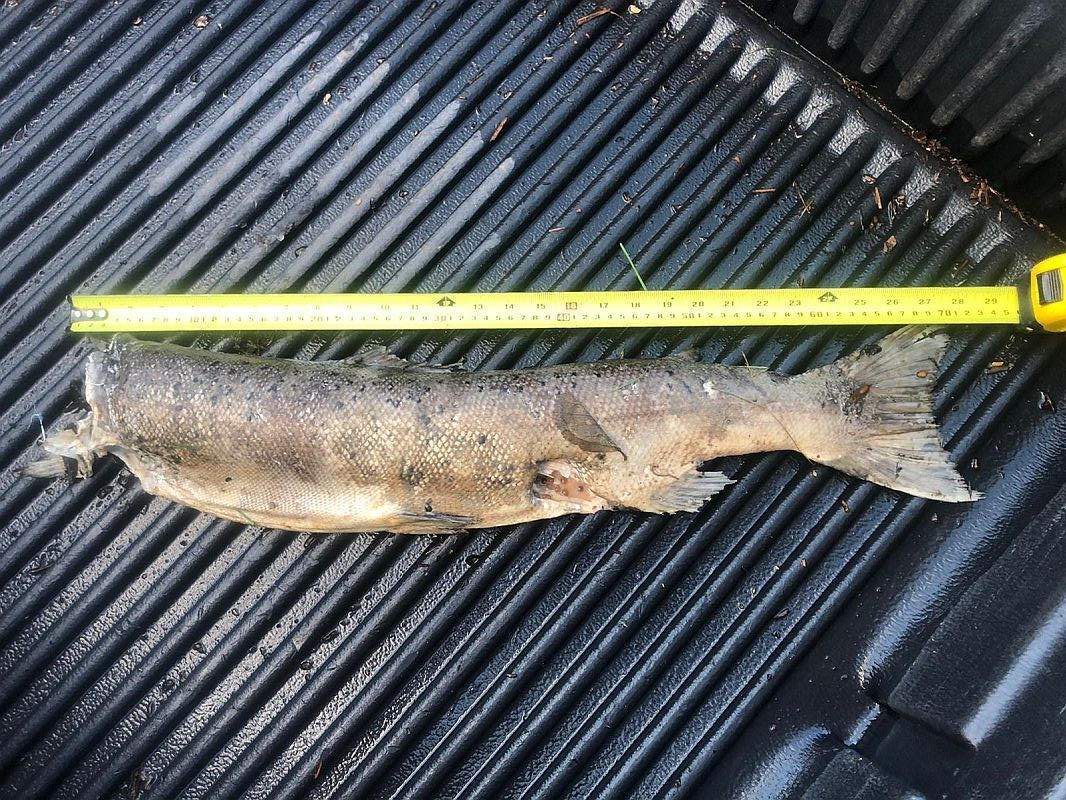 Figure 11. Remains of a post-spawning Atlantic salmon from upstream of the site of the former Snake Lane Weir at River Ecclesbourne, January 2023 (photo by John Thornhill)

Next steps
Postern Mill Weir (Figure 12), the only remaining barrier fragmenting River Ecclesbourne, will be addressed in summer 2023 to enable fish reaching their historic spawning grounds near Wirksworth. 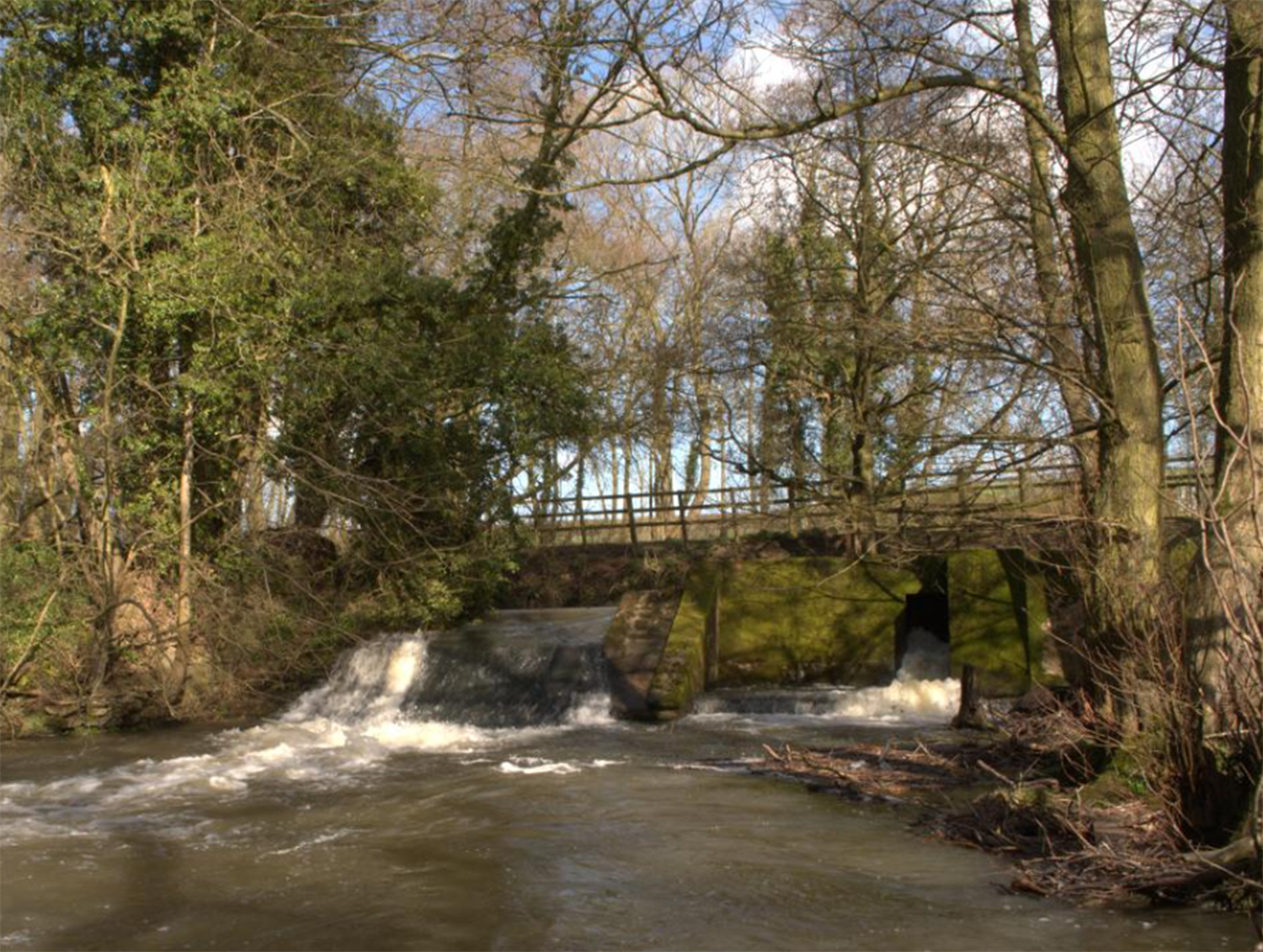 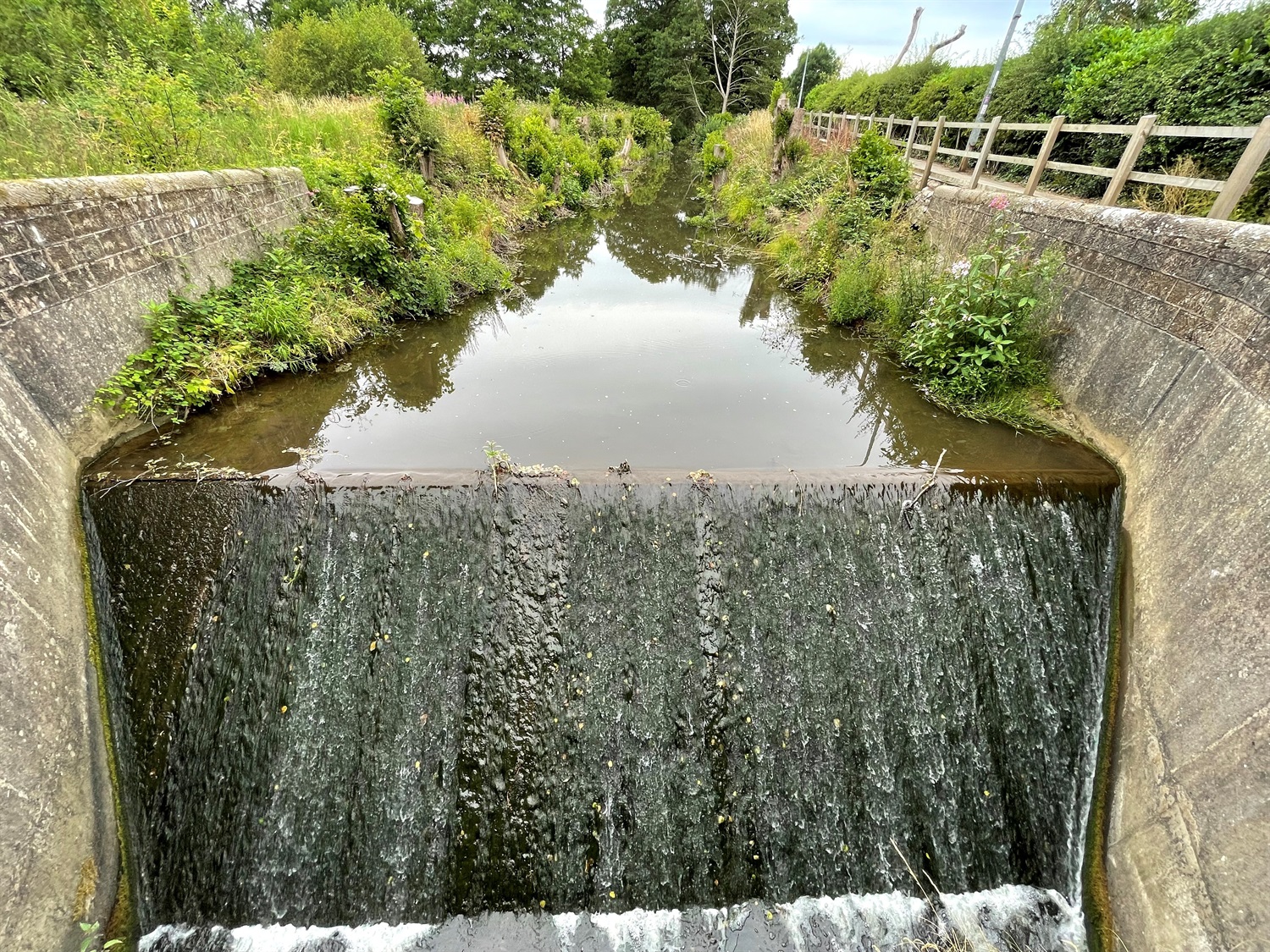 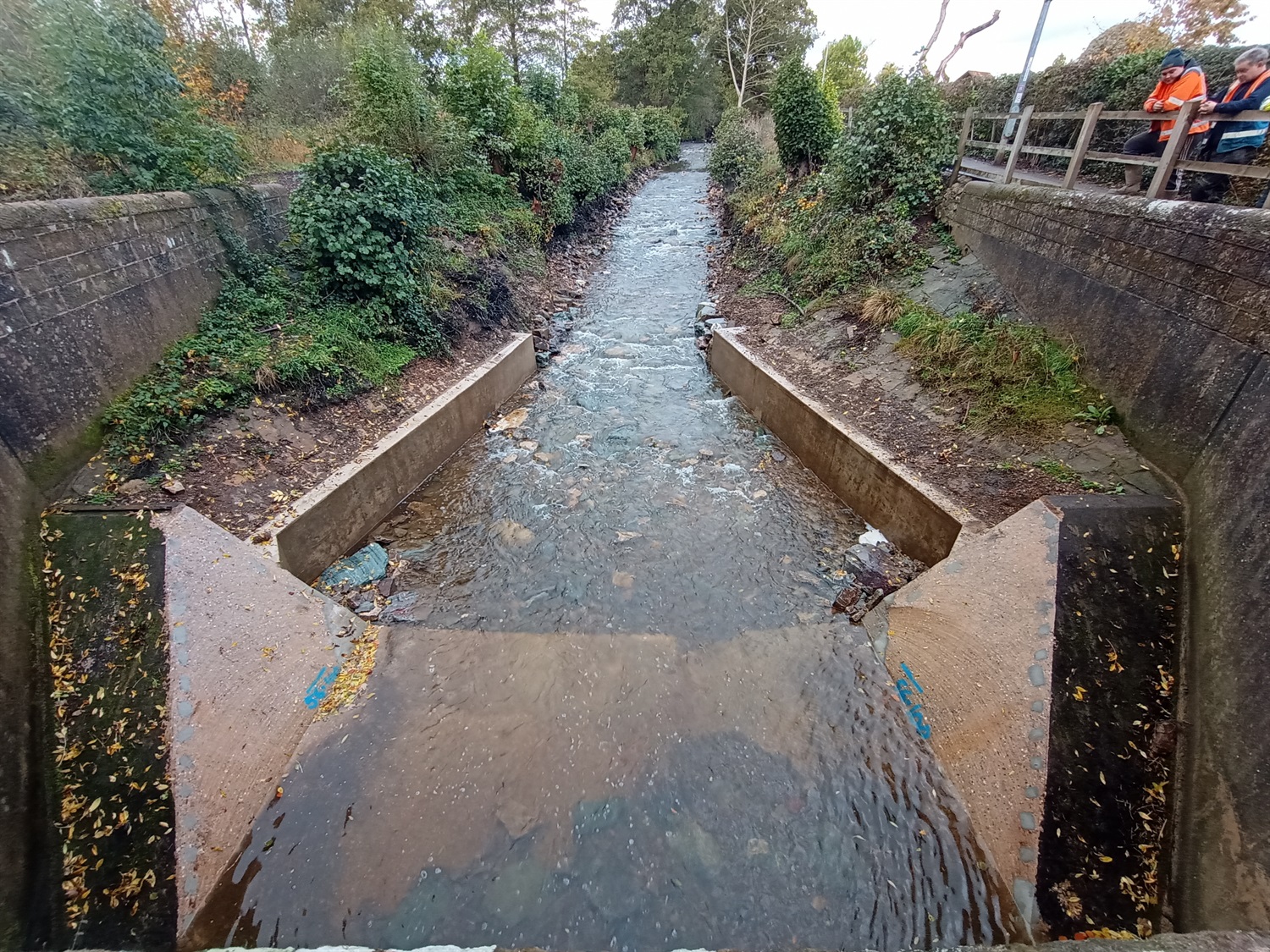 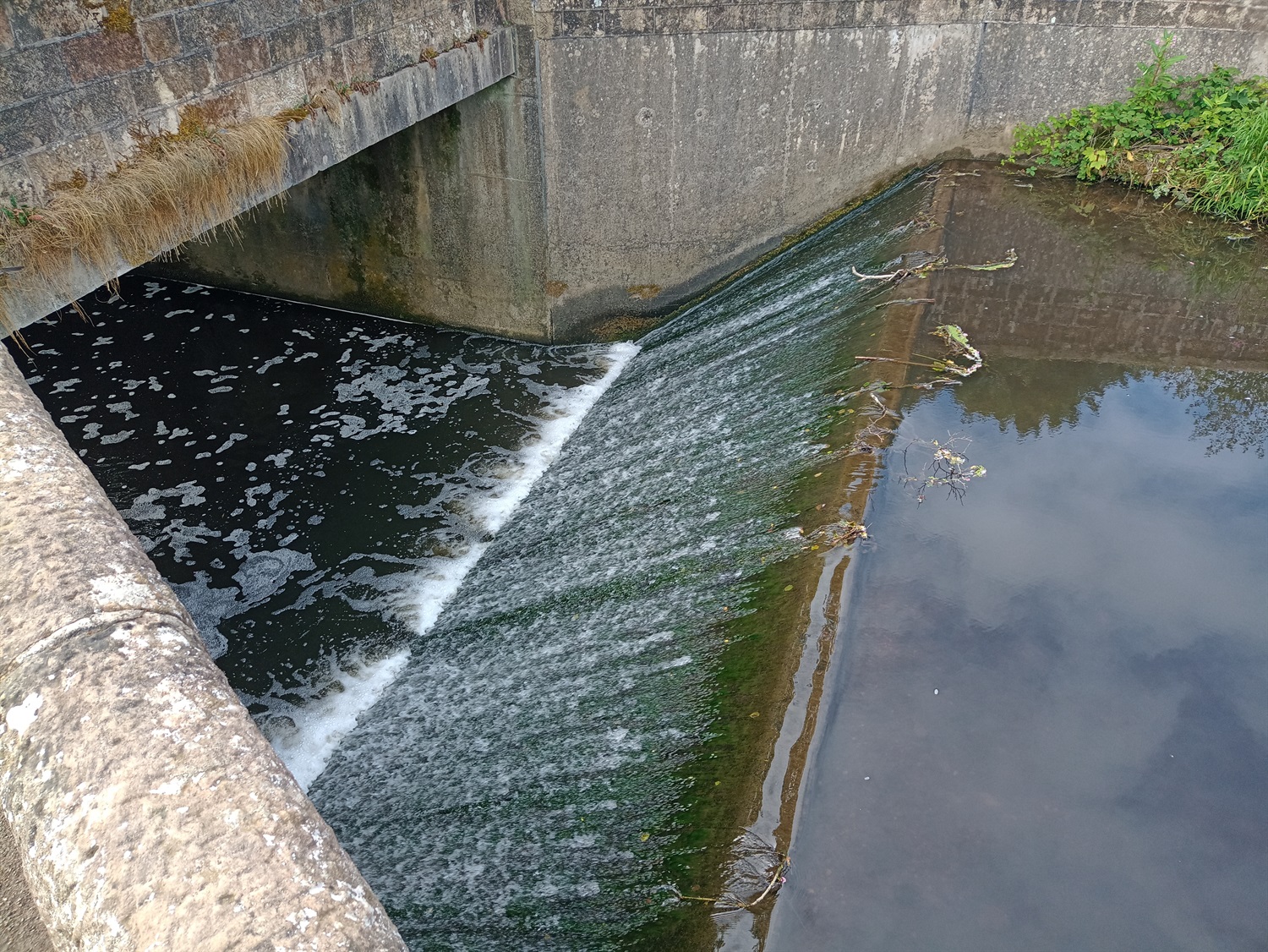 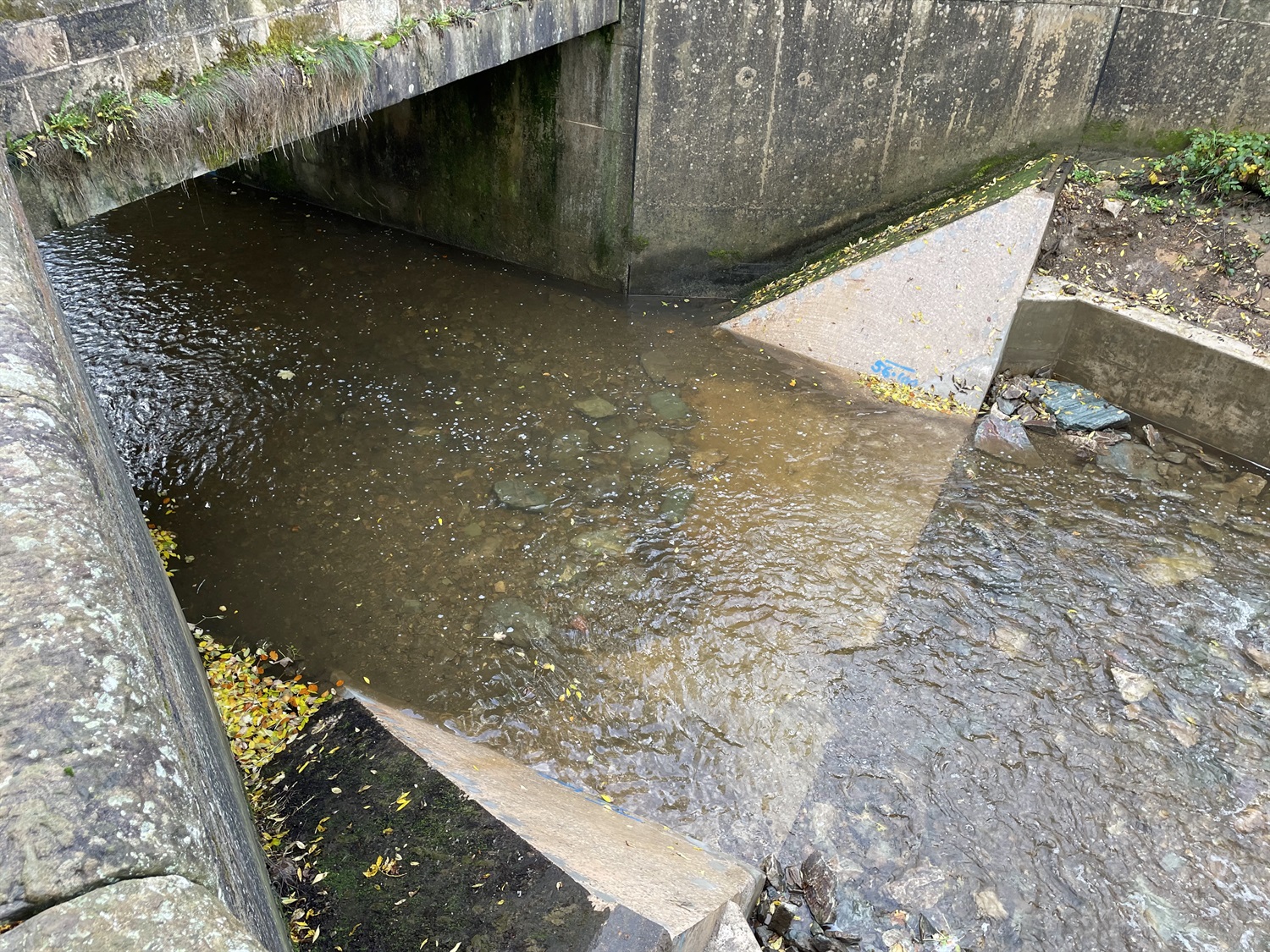 The removal site at River Ecclesbourne: (left) before and (right) after the removal operations of Snake Lake Weir (photos by Wild Trout Trust and Ryan Taylor)

With many thanks to Tim Jacklin and Ryan Taylor for providing the information and photographs presented herein.