River Vouga springs from the Lapa Mountain in north-central Portugal at 930 m altitude and has a drainage area of 3635 km2 (Fig. 1). It runs for 148 km before flowing into the Atlantic Ocean through the Ria de Aveiro. Its basin is located between latitude 40° 15′ and 40° 57′ N and longitude 07° 33′ and 08° 48′ W, with a dominant E-W orientation. The main tributaries of River Vouga are Sul, Caima, Antuã and Águeda rivers. The latter springs from the Caramulo mountain, it has a basin of 971.8 km² and runs for ~40 km² before its confluence with River Vouga at Eirol (Fig. 1). It has two main tributaries, rivers Cértima and Alfusqueiro. The latter also springs from Caramulo, in the municipality of Vouzela, flows for 49.3 km before meeting River Águeda in the Bolfiar area and it has a catchment area of 204.8 km². 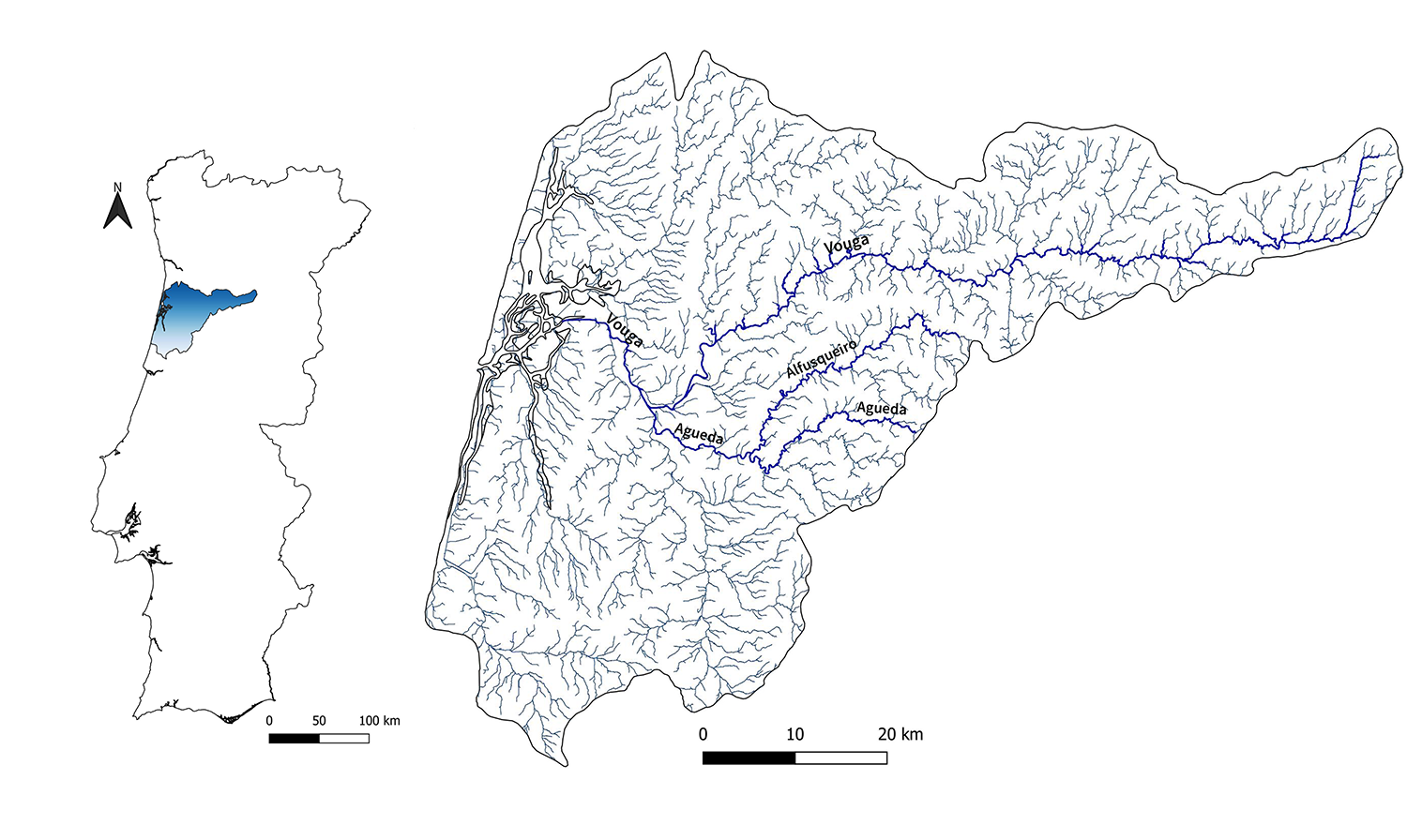 The River Vouga basin is of high ecological importance, since it is home to several commercially exploited and/or of conservation significance fish species. Specifically, the anadromous species include the allis shad (Alosa alosa), the twaite shad (A. fallax), the sea trout (Salmo trutta), the sea lamprey (Petromyzon marinus) and an endemic species of brook lamprey (Lampetra alavariensis). The latter has been described as a new species, after the taxonomic revision of the brook lamprey Lampetra planeri (Mateus et al. 2013). The catadromous fish species present in the River Vouga basin are the European eel (Anguilla anguilla), the thinlip grey mullet (Chelon ramada) and the flounder (Platichthys flesus), while the potamodromous ones are the Iberian barbel (Luciobarbus bocagei), the Iberian nase (Pseudochondrostoma polylepis) and the brown trout (same species as sea trout, but with a resident ecotype).

The River Vouga integrates a diversified ecosystem complex comprising several areas of conservation interest. Two of those areas have also been characterized as Sites of Community Importance (SCI) (Fig. 2): 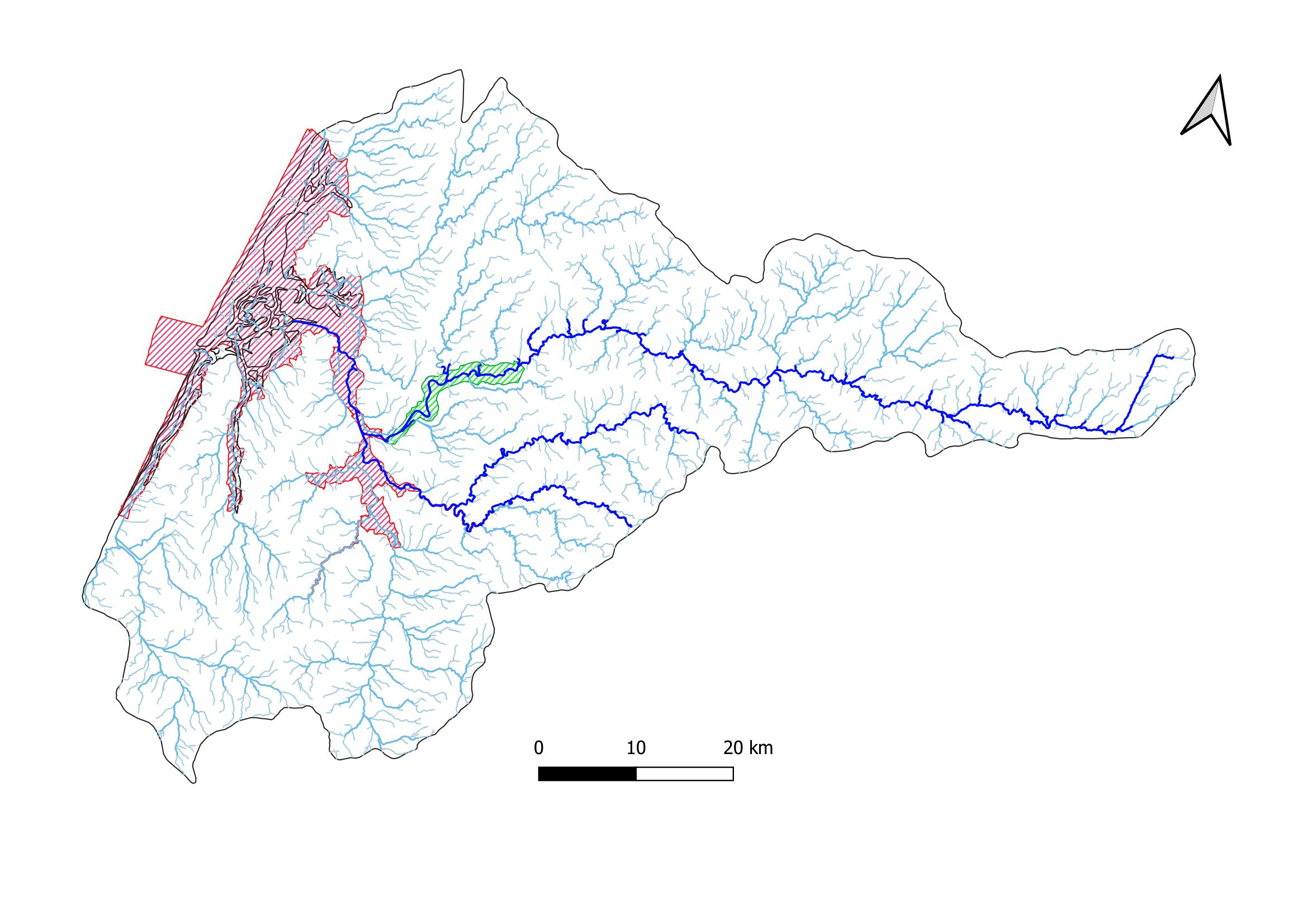 In addition, within the River Vouga basin, there are zones defined as Special Protection Areas by the Institute for Nature Conservation and Forests (ICNF). Specifically, there are areas whose protection aims to provide shelter and spawning habitats to fish species and where fishing is prohibited. Also, there are designated professional fishing areas, where fishing operations are regulated by specific rules for each fishing ground and by taking into consideration the specificity of the local artisanal fishing methods.

Despite their high ecological importance, rivers and streams within the River Vouga watershed are highly fragmented by unsurpassable obstacles to migratory fish that also cause detrimental effects on fluvial habitats (Fig. 3). In that respect, LIFE Águeda – Conservation and Management Actions for Migratory Fish in the Vouga River Basin (LIFE16 ENV/PT/000411) project aims to eliminate hydro-morphological pressures within the project area (Fig. 4) by removing or mitigating 13 riverine barriers to re-establish conditions of good ecological status, as required by the Water Framework Directive (WFD) and the applicable River Basin Management Plan. The project commenced in August 2018 and will be completed by July 2024. It is coordinated by the University of Évora and supported – technically and scientifically – by MARE (Marine and Environmental Sciences Centre). Associated beneficiaries of the project are the municipalities of Águeda and Mora – technically supported by the Mora Freshwater Aquarium –, DOCAPESCA – Portos e Lotas S.A. and AQUALOGUS – Engenharia e Ambiente, Lda. 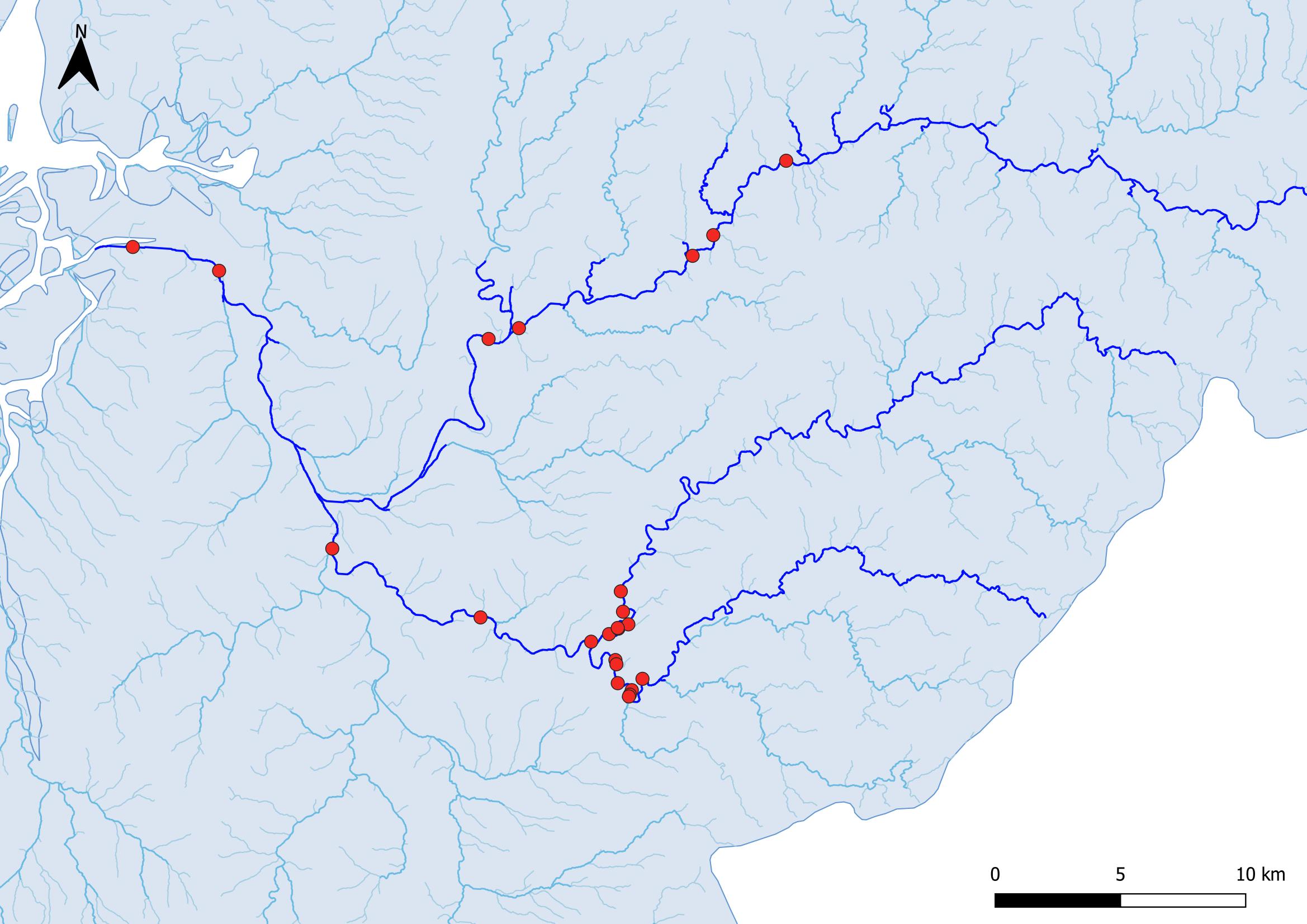 Figure 3. Riverine barriers in Vouga, Águeda and Alfusqueiro rivers identified within the framework of the LIFE Águeda project (LIFE 16 ENV/PT/000411) 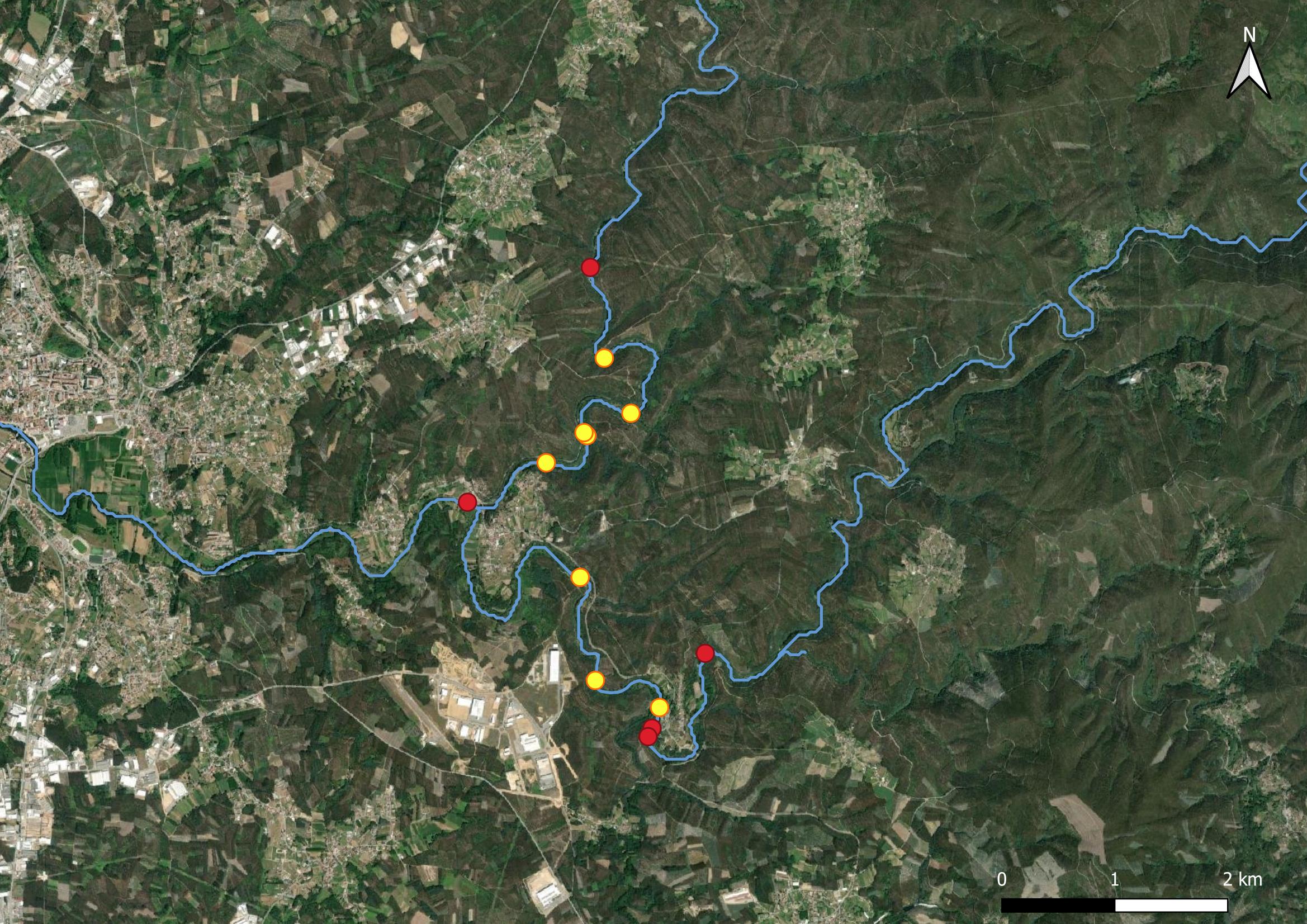 Figure 4. Location of barriers in Águeda and Alfusqueiro rivers that have been planned to be removed (yellow) or mitigated (i.e., installation of fish pass) (red) within the framework of the LIFE Águeda project

However, the scope of LIFE Águeda project goes beyond the barrier removals/mitigations; it’s a multifaceted project whose targets – based on the project’s website – can be summarized as follows:

In total, 8 barriers have been removed within the framework of the LIFE Águeda project (Fig. 4). Removal works were executed in the beginning of 2022, from late-February till mid-March:

1) Açude dos Moinhos da Cheira: This 1-m-high and 10-m-wide weir made of concrete and stone (Fig. 5) was located at River Águeda, approximately 3.5 km upstream from the Bolfiar Park, at the conjunction with River Alfusqueiro (latitude: 40.551778, longitude: -8.387750). It was originally built to power a nearby watermill, but it had been lying idle for several years. Based on telemetry studies, and despite its low height and the existence of a 1-m wide opening near its left side, it constituted an unsurpassable barrier to fish species, especially in reduced-flow situations. The removal operations took place in March 2022 (Fig. 6). 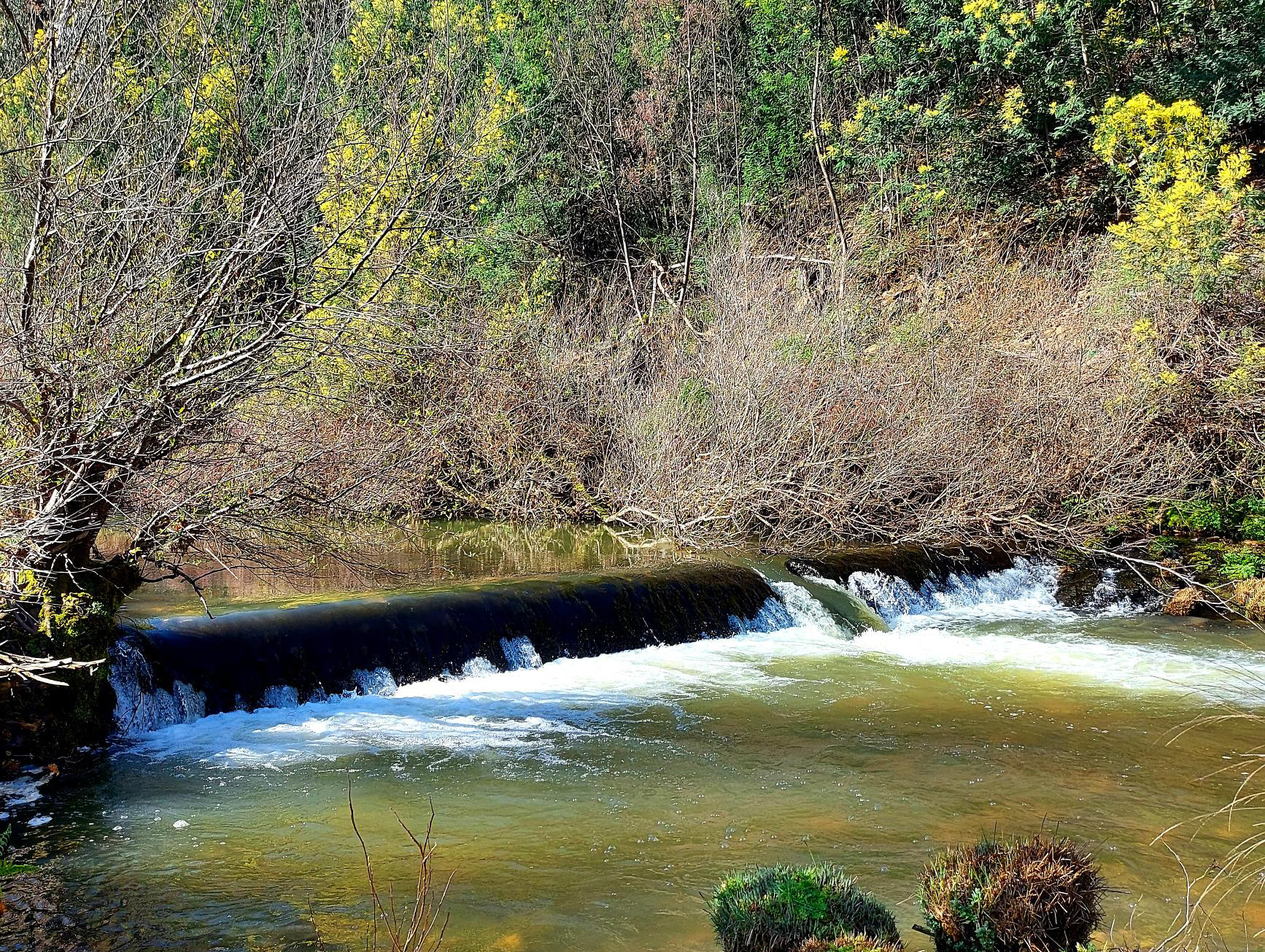 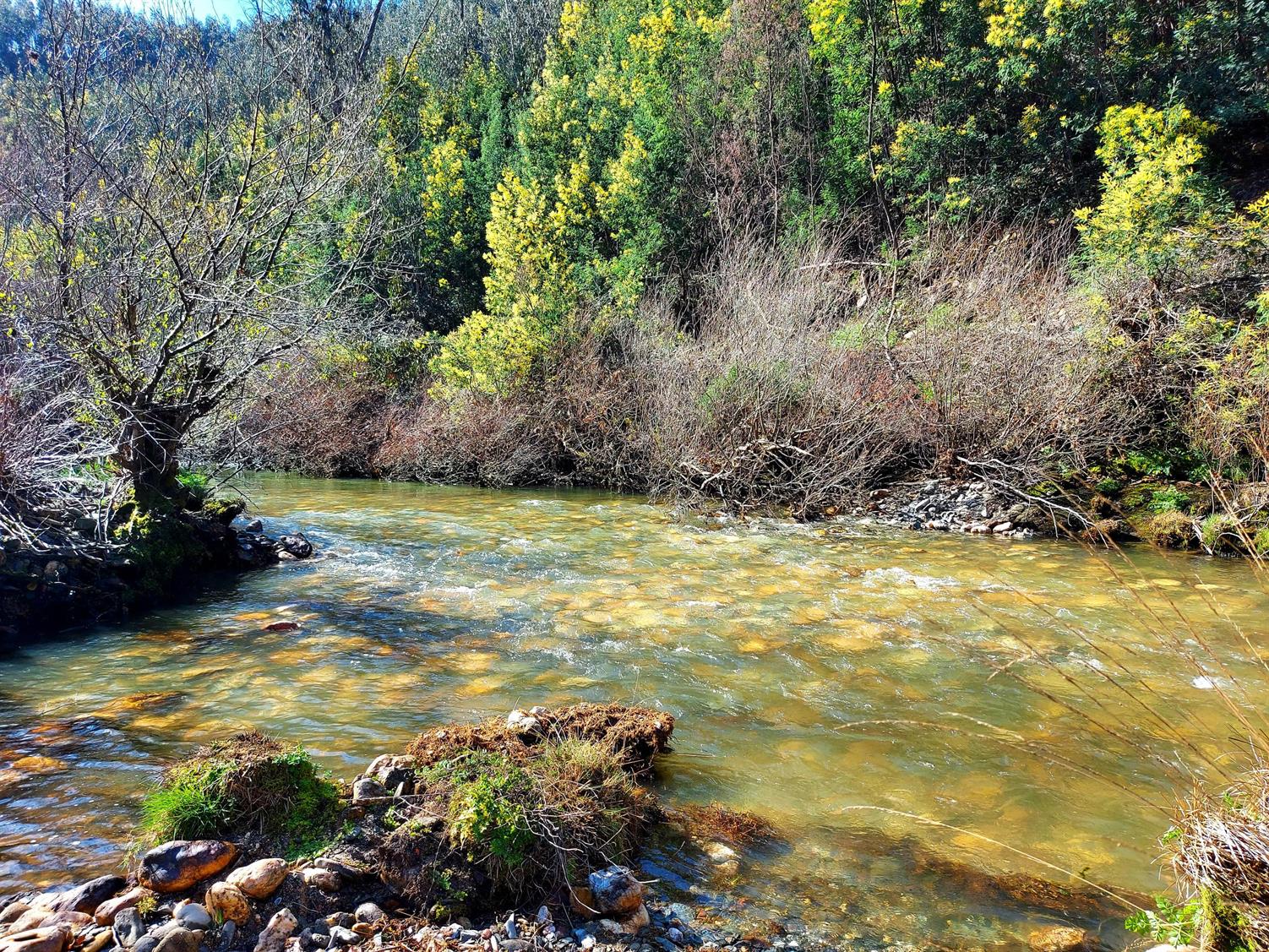 2) Poldras a jusante da Redonda: This 0.5-m-high and 10-m-wide structure made of rock boulders (Fig. 7) was located at River Águeda (latitude: 40.549667, longitude: -8.381083). The openings between boulders were widened, so the structure does no longer prevents fish migration. Works were executed in February 2022. 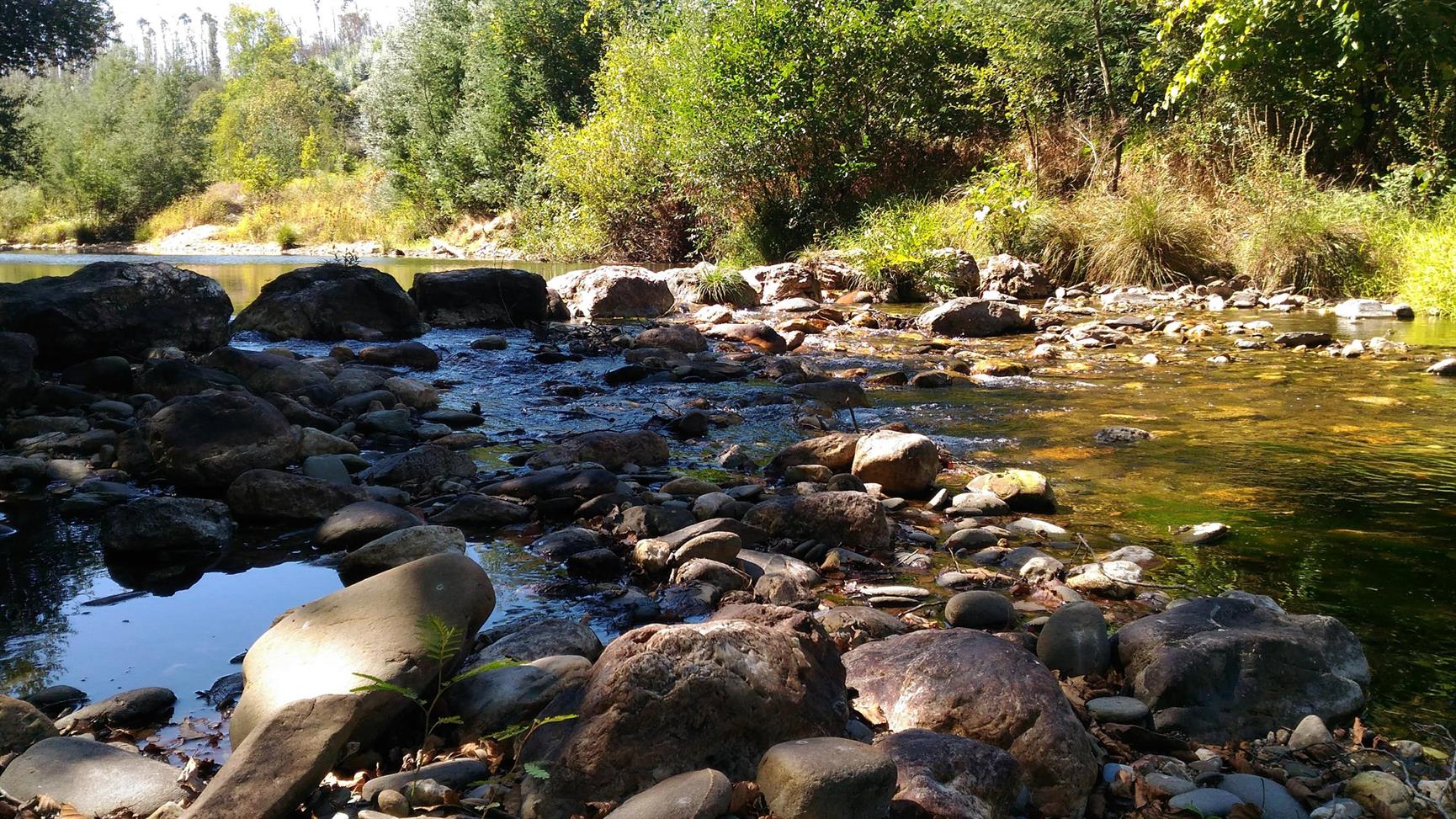 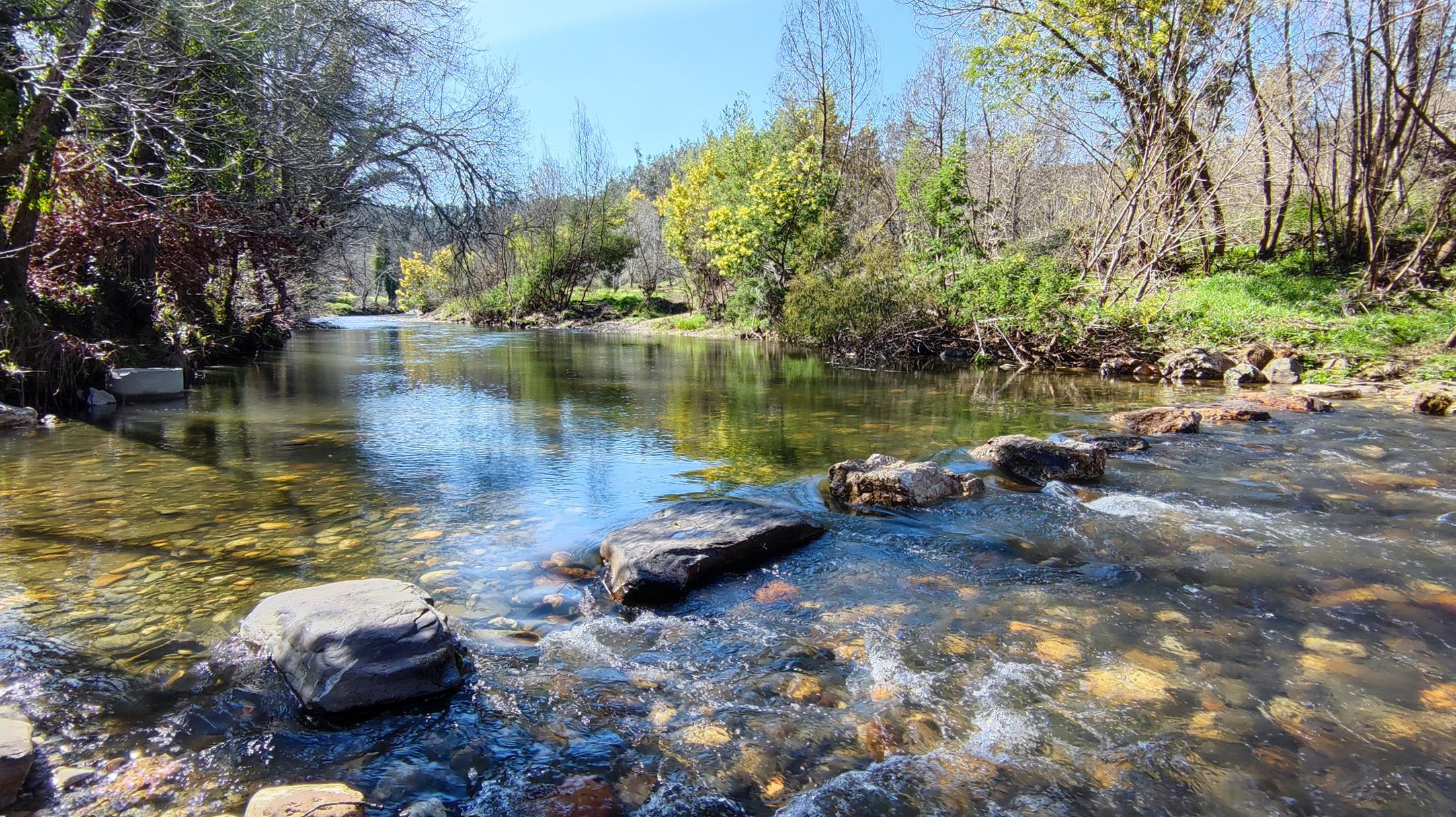 Figure 7. The Poldras a jusante da Redonda barrier site at River Águeda (left) before and (right) after the removal operations. Photos by: S. Pedro (LIFE Agueda project; MARE-University of Évora) 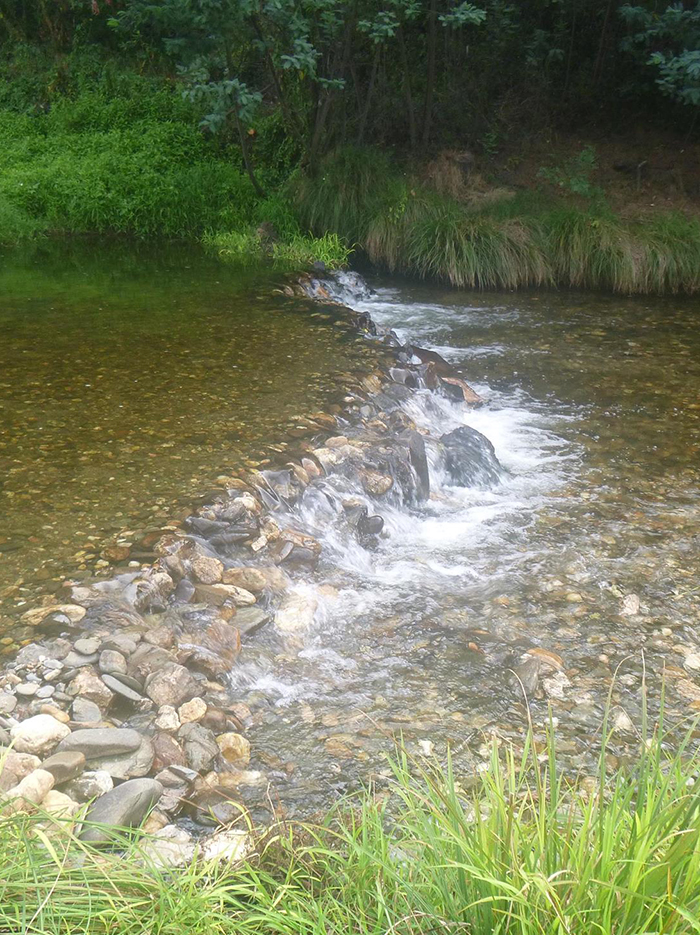 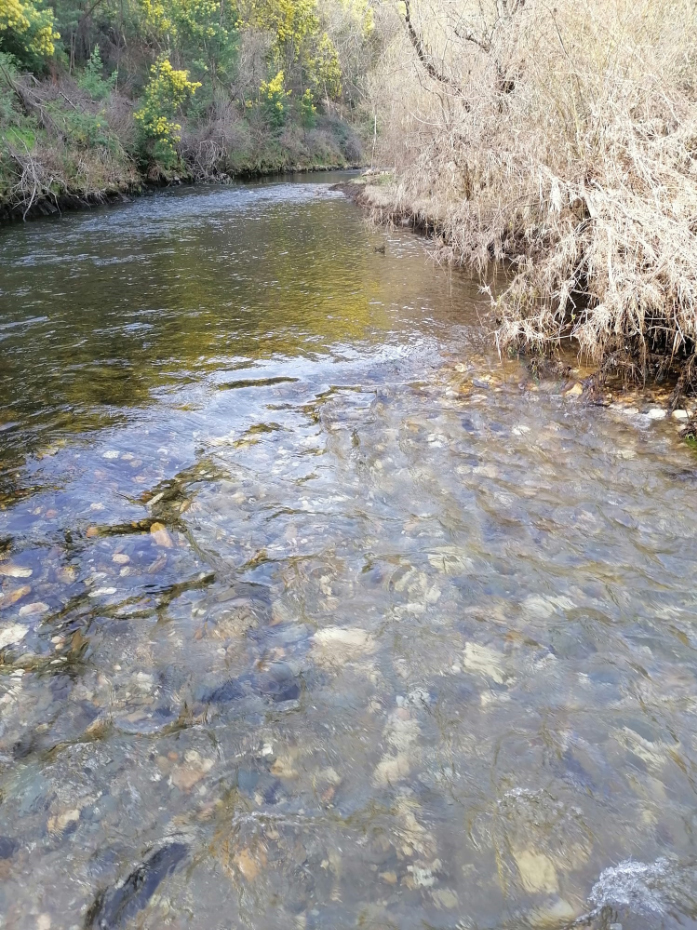 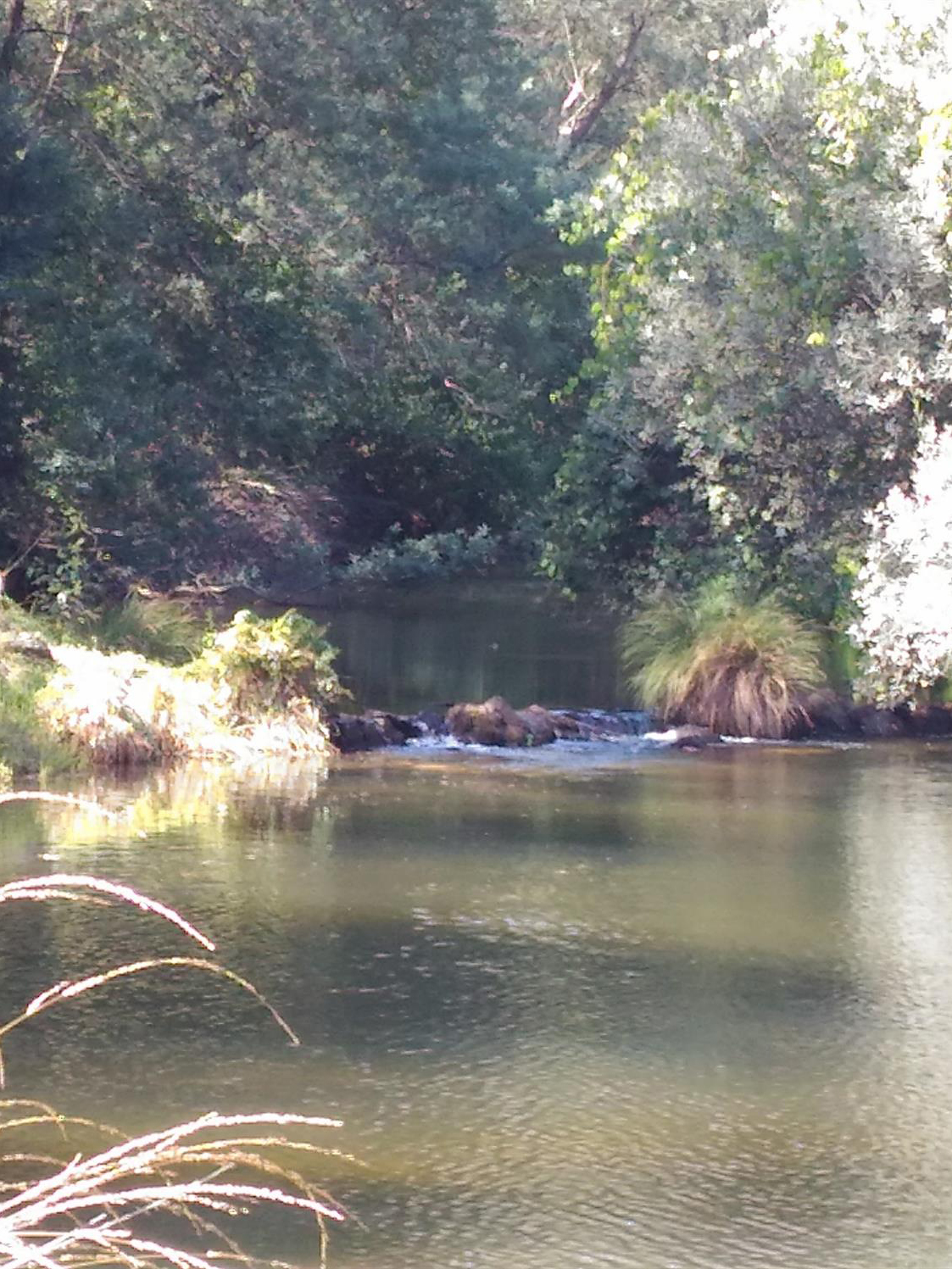 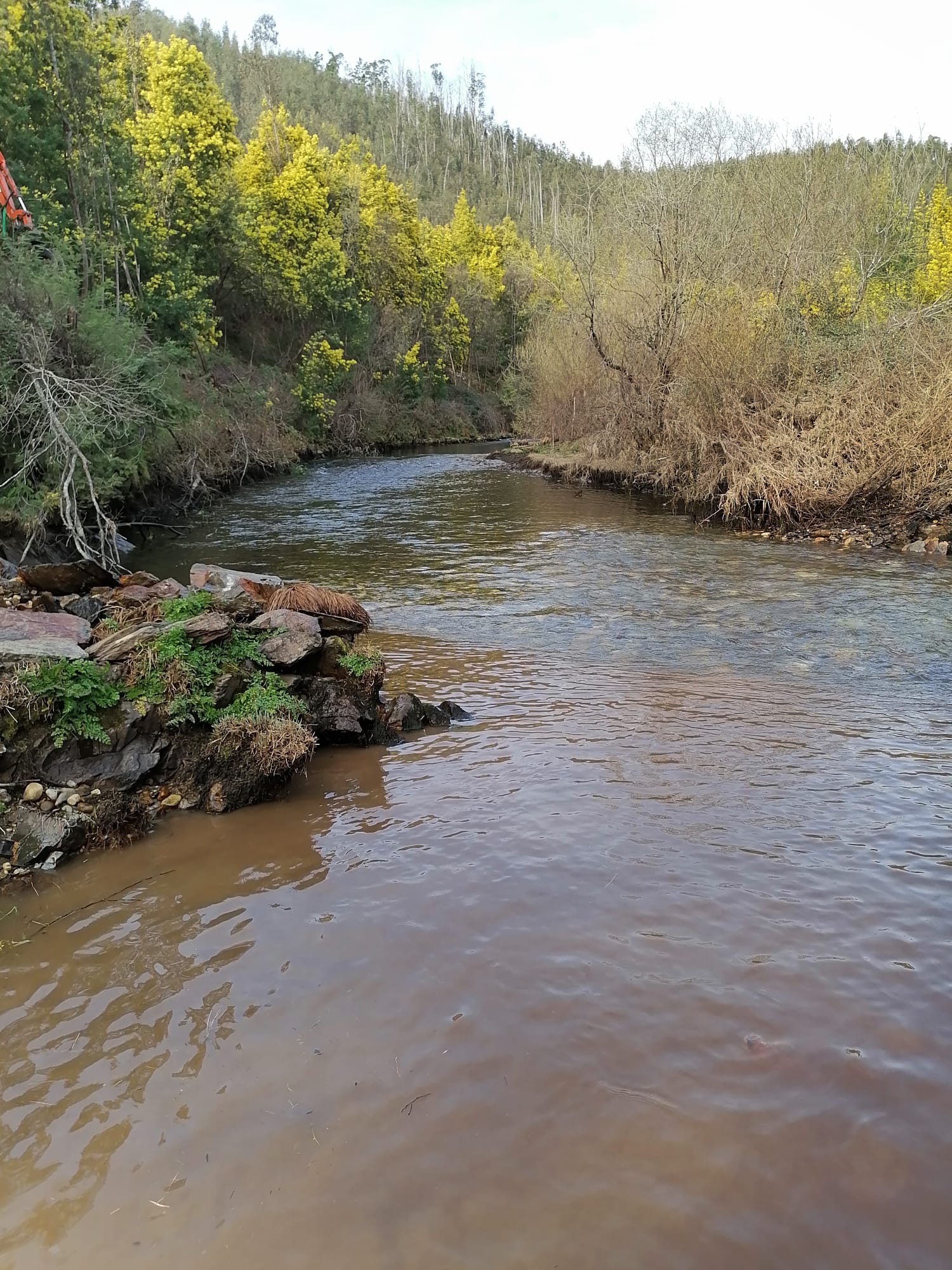 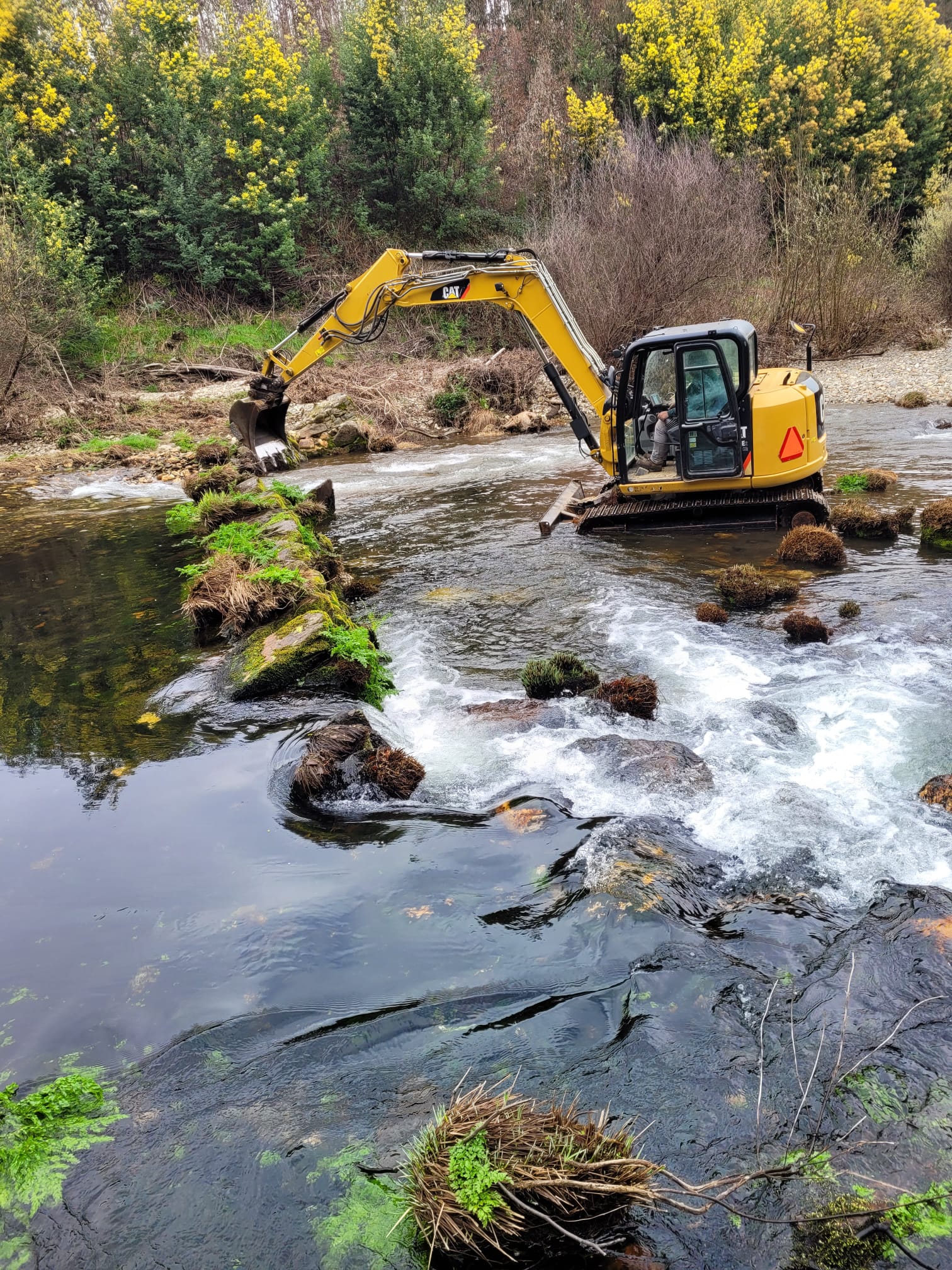 7) Presa Velha: This weir was located in River Alfusqueiro, approximately 2 km from the conjunction with River Águeda (latitude: 40.573028, longitude: -8.384056). It was a 3-m high and 50-m wide mortared stone structure (Fig. 11) and thus an unsurmountable barrier hindering fish migration under any hydraulic condition, as proved by telemetry studies. This artificial riverine barrier had originally been built to power a watermill but had outlived its useful life and no longer served its original economic function. In fact, the weir was in advanced state of deterioration and part of the structure near its right side collapsed in the winter before the removal. It was removed in March 2022 (Fig. 12). 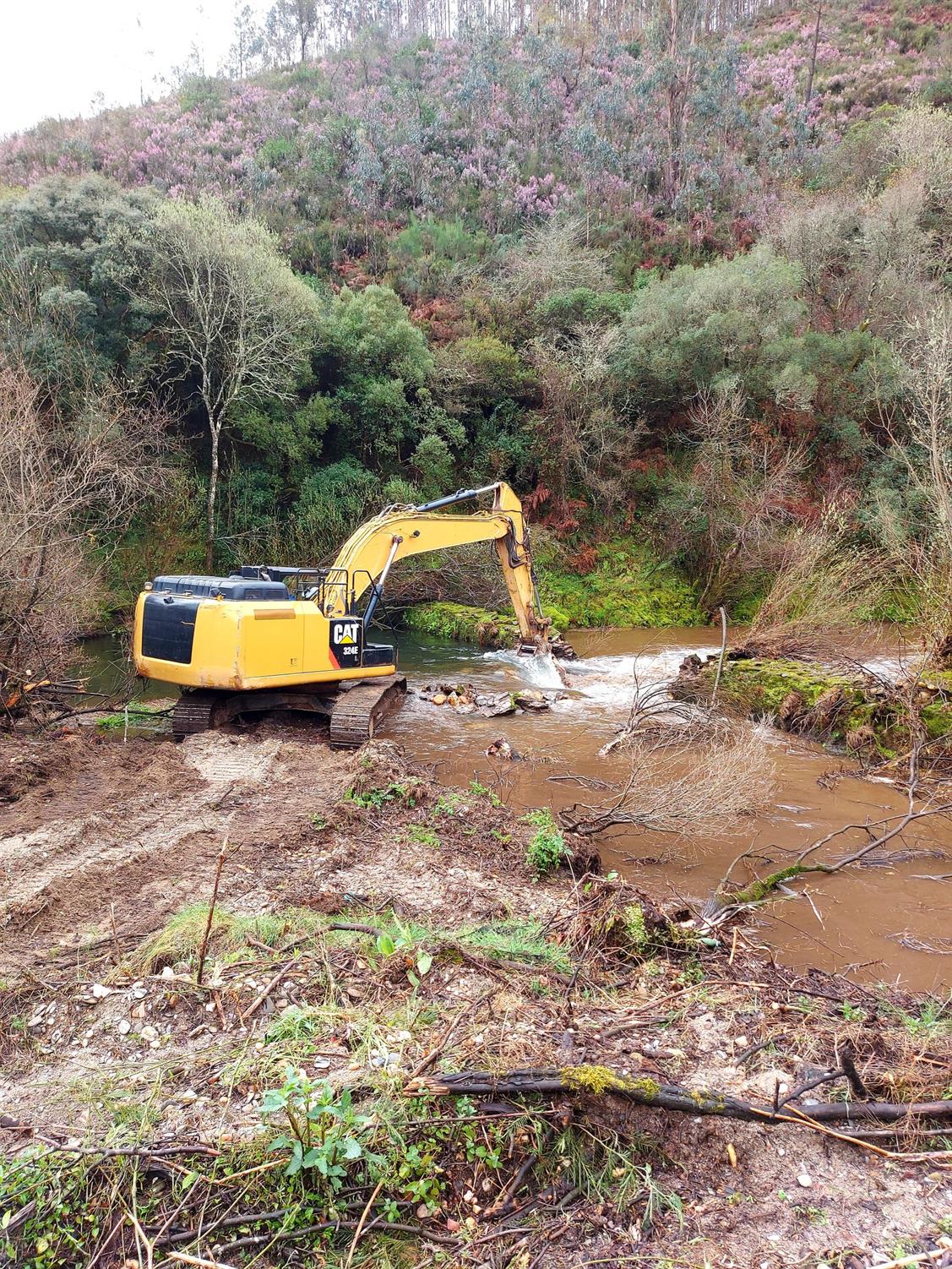 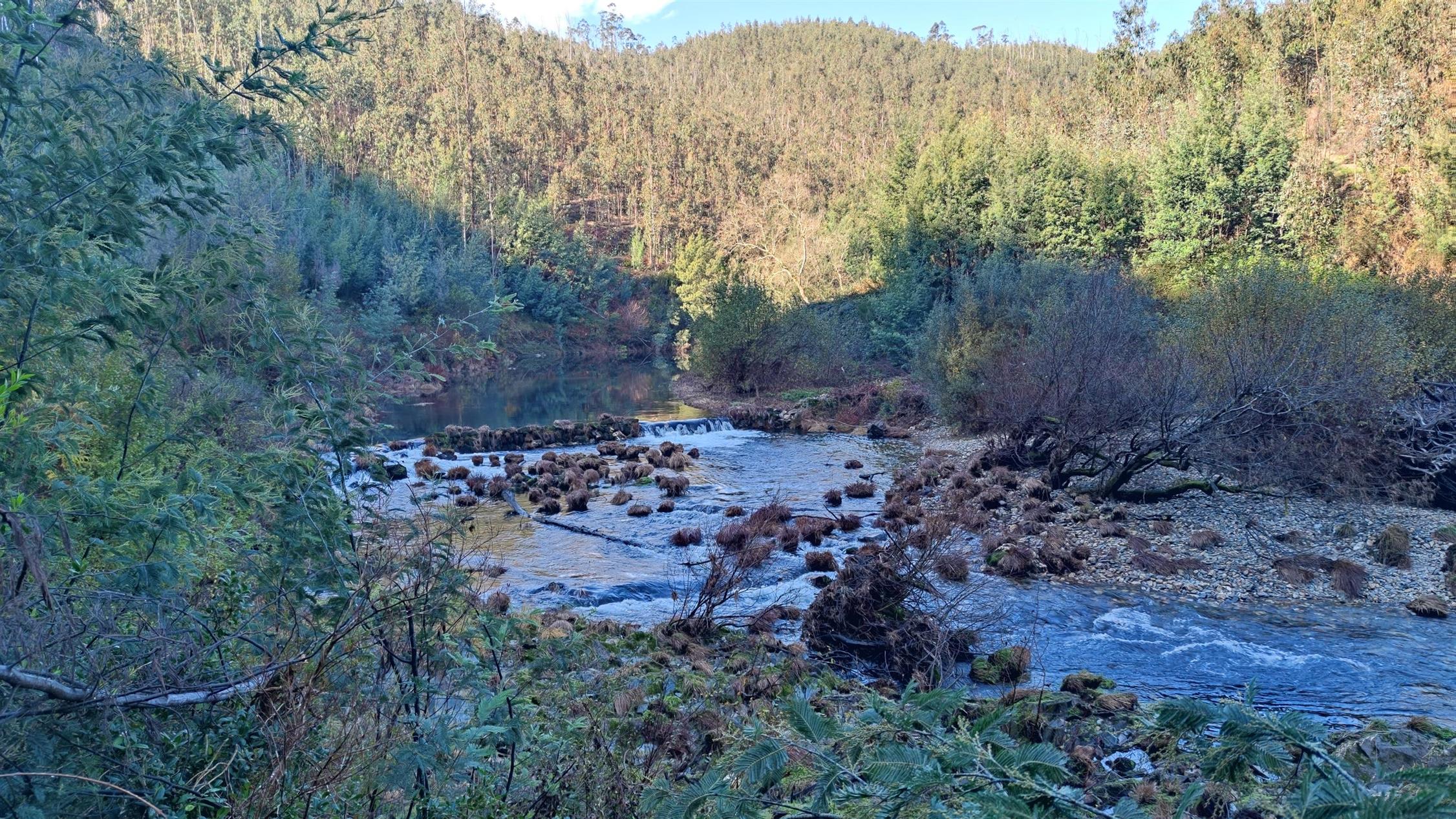 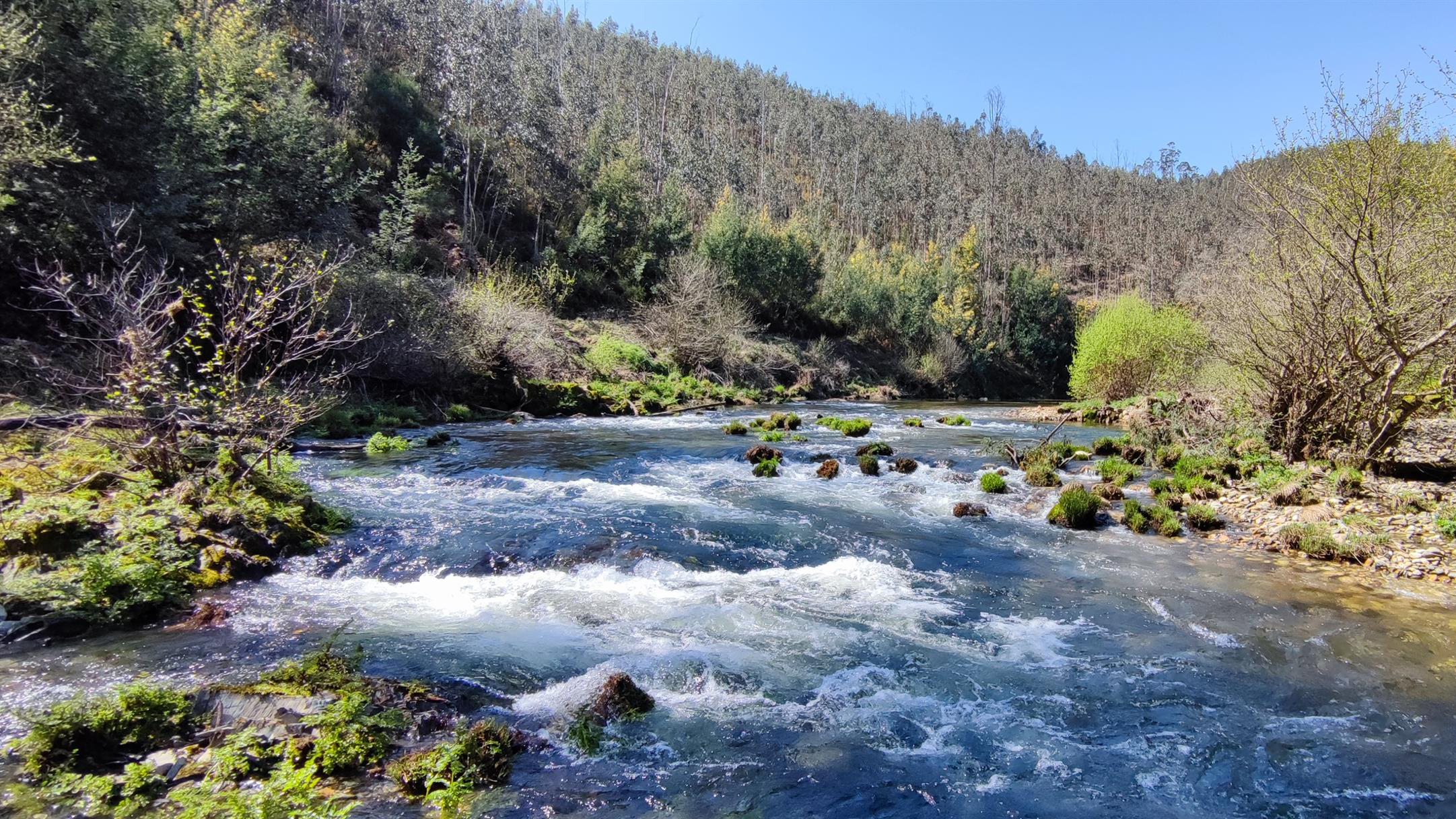 Figure 13. The Presa do Portinho weir site at River Alfusqueiro (left) before and (right) after the removal operations. Photos by: S. Pedro (LIFE Agueda project; MARE-University of Évora) 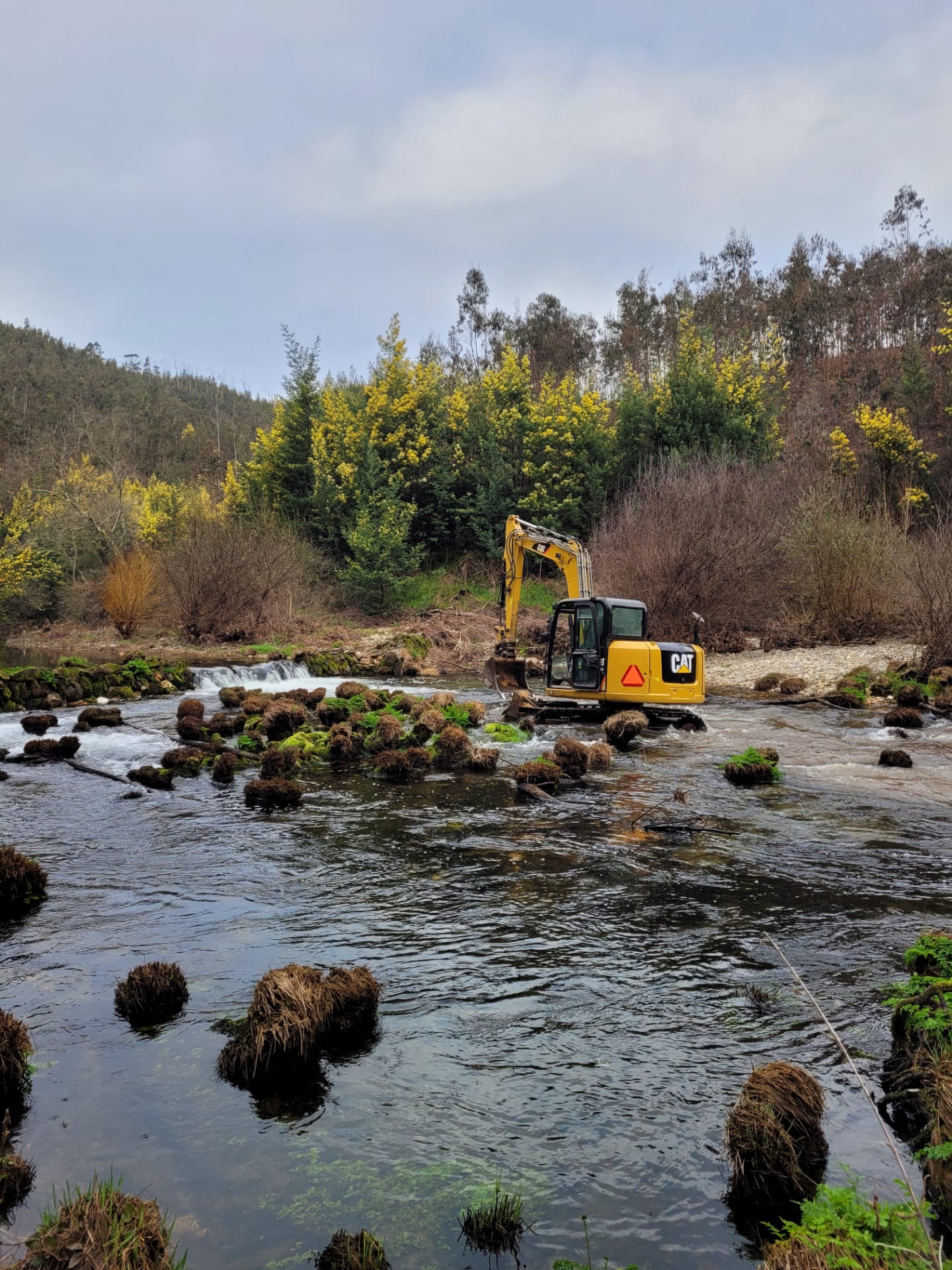 With many thanks to Dr. Sílvia Pedro, Project Manager – LIFE Águeda project for providing the information and photographs presented herein