The River Dee springs from the uplands of Snowdonia in North-western Wales, it descends via Llyn Tegid (the largest natural lake in Wales), runs through the Vale of Llangollen and flows into the Atlantic Ocean just below Chester (Figure 1). It is the largest river in North Wales (~110 km long) with a catchment area of more than 1800 km2 and it provides water to farmed animals (mainly cattle and sheep) and to 2.5 million people. River Dee also offers many chances for recreational activities, like angling, rafting and canoeing/kayaking. However, and despite its high ecological importance and the fact that has been designated as a Special Area of Conservation, the River Dee is one of the most intensely regulated European rivers. As a result, all fish species inhabiting the River Dee are currently classified as in “unfavourable” conservation status. 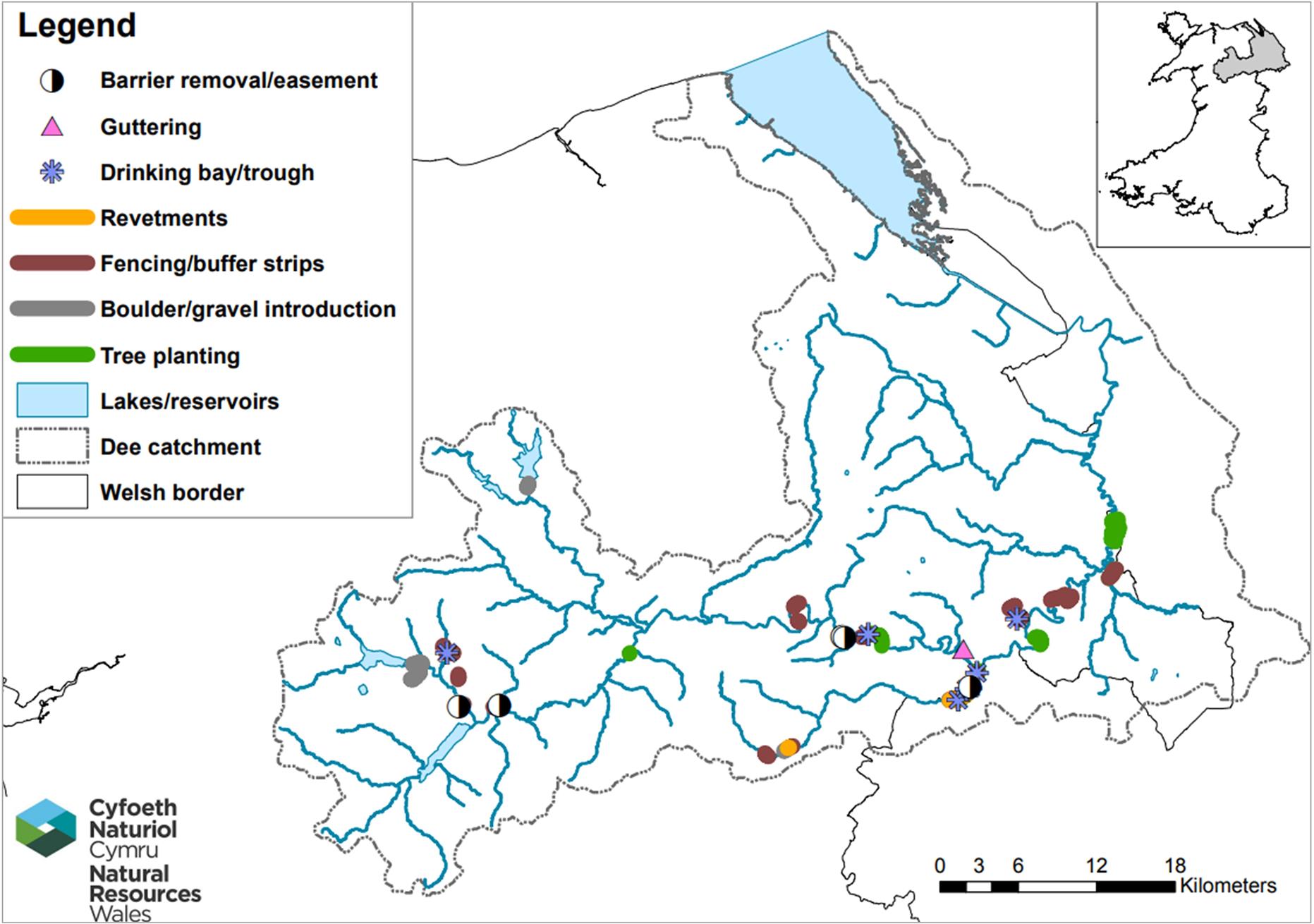 Figure 1. River Dee watershed in Western-central UK and location of interventions conducted so far within the framework of LIFEDeeRiver Project

Llangollen Lower Weir (latitude: 52.97053, longitude: -3.169028) is one of the barriers along the corridor of River Dee located in the middle of Llangollen Town in Denbighshire, Wales (Figure 2). The weir was built around 1805 and thuss has been fragmenting the River Dee for more than two centuries. This barrier made of concrete, stone, wood and metal (Figures 3 & 4) was originally created to power a cotton mill, and its ownership is now shared between Cyfoeth Naturiol Cymru/Natural Resources Wales and a private owner. 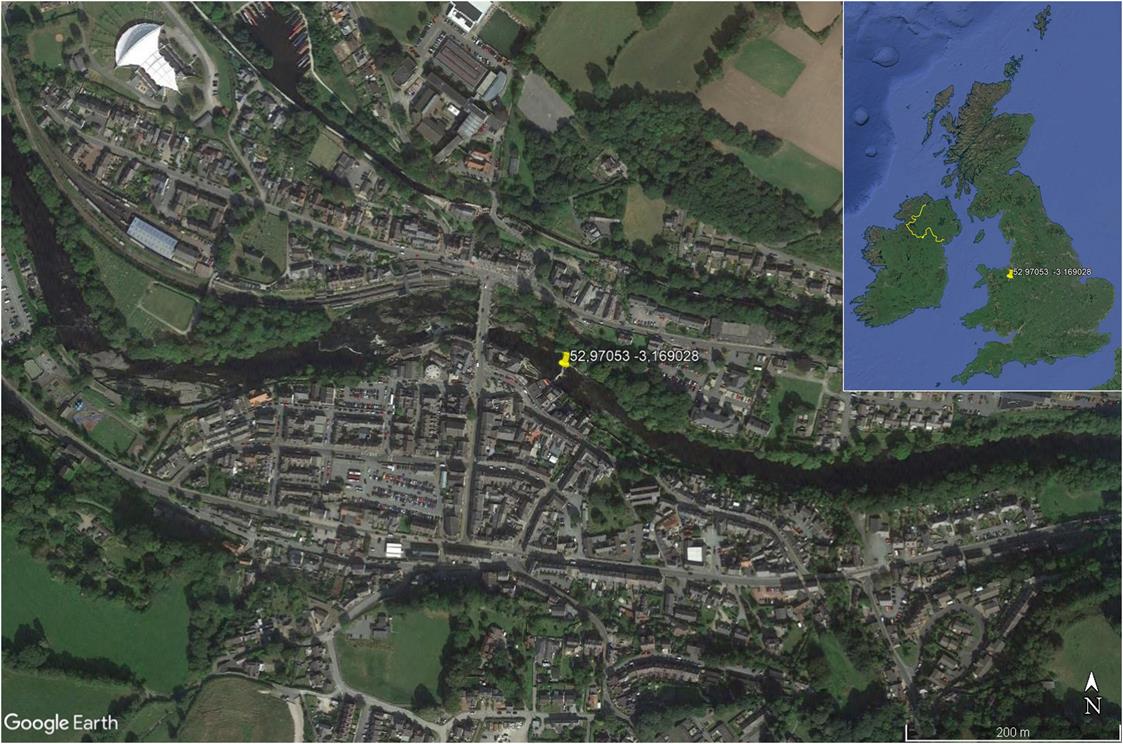 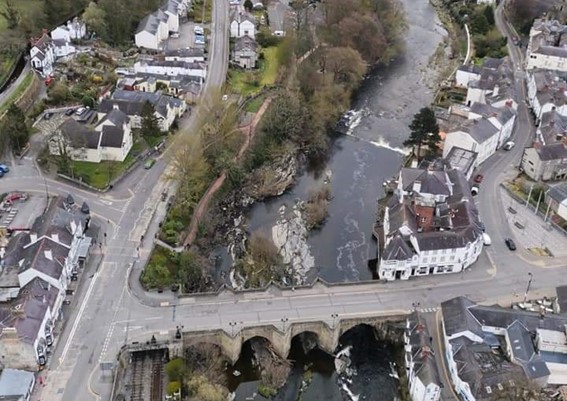 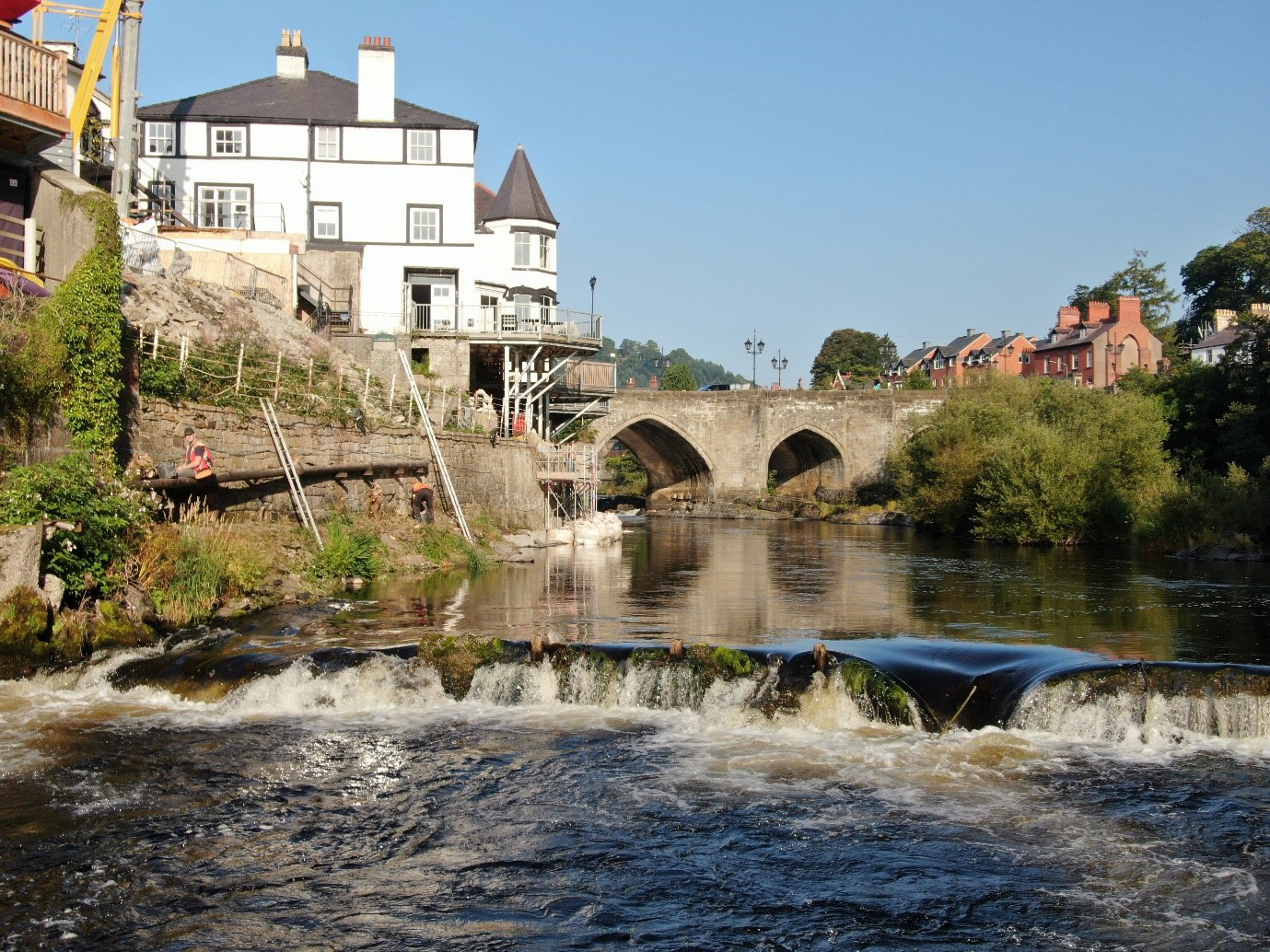 LIFEDeeRiver (LIFE18 NAT/UK/000743) is a £6.8 million, cross-border (Wales and England) project funded through the EU LIFE programme, with additional funding from Welsh Government, Environment Agency, Dŵr Cymru/Welsh Water and Snowdonia National Park Authority (Video 1). It commenced in September 2019 and will end in December 2024 and aims to improve passage for fish species like Atlantic salmon (Salmo salar), Brook lamprey (Lampetra planeri), River lamprey (Lampetra fluviatilis) and Sea lamprey (Petromyzon marinus), and enhance their population numbers as well as of the critically endangered freshwater pearl mussels (Margaritifera margaritifera), birds and mammals inhabiting River Dee and the surroundings. Water quality improvement is also among the goals of LIFEDeeRiver Project. The actions that will be achieved upon the completion of this project are:

Given the number and diversity of stakeholders of the area surrounding the Llangollen Lower Weir, before any actions were taken, Cyfoeth Naturiol Cymru-Natural Resources Wales, in cooperation with Denbighshire County Council, the contractor (DW Jones Fencing and Groundworks) and design consultants decided upon the key design constraints. It was agreed that any works on the weir would result in appropriate water velocities for target fish species to pass through, and that the water level upstream the weir would be minimally impacted. The possible impact of the weir modifications on flood risk and protected species inhabiting the area were also taken into consideration. Based on a survey made by Clywd and Powys Archaeological Trust aiming to evaluate the existence of any historically significant features at the site, Llangollen Lower Weir has been in evidence since 1805. Thus, heritage was also raised as an important consideration before any works on the weir took place.

The works on the Llangollen Lower Weir started in September 2021 (Figures 5 & 6) within the framework of LIFEDeeRiver Project aiming to improve fish passage at the site. An additional benefit of the project was to reduce the safety risks of this structure, since near misses have been witnessed there. The modifications involved the partial removal of the weir, where a 4-m-wide notch was made down to riverbed level (Figure 7). A few pieces of metal were also removed from the area that presented a hazard to kayaks and rafts. 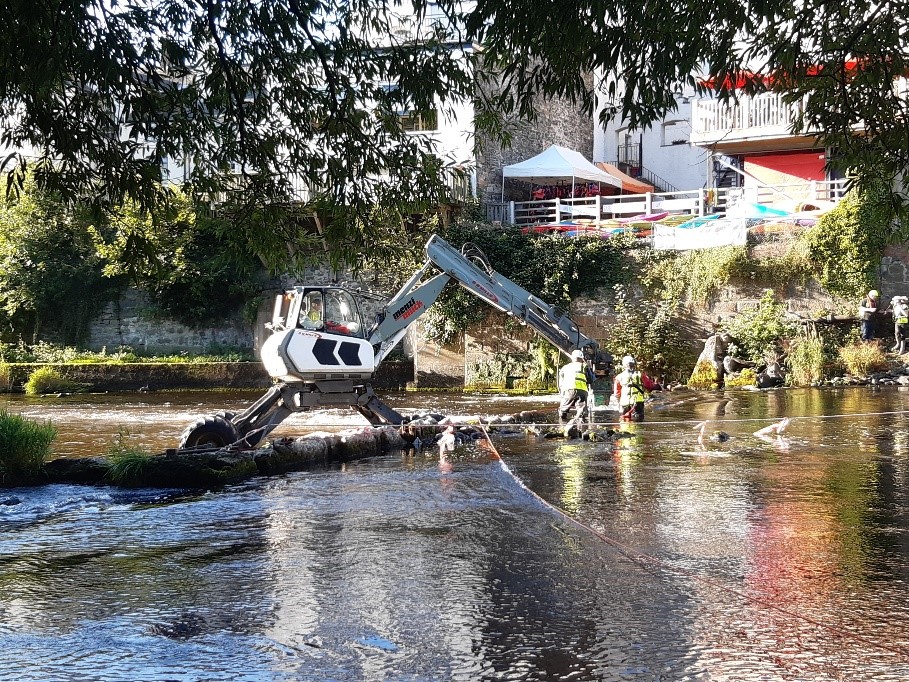 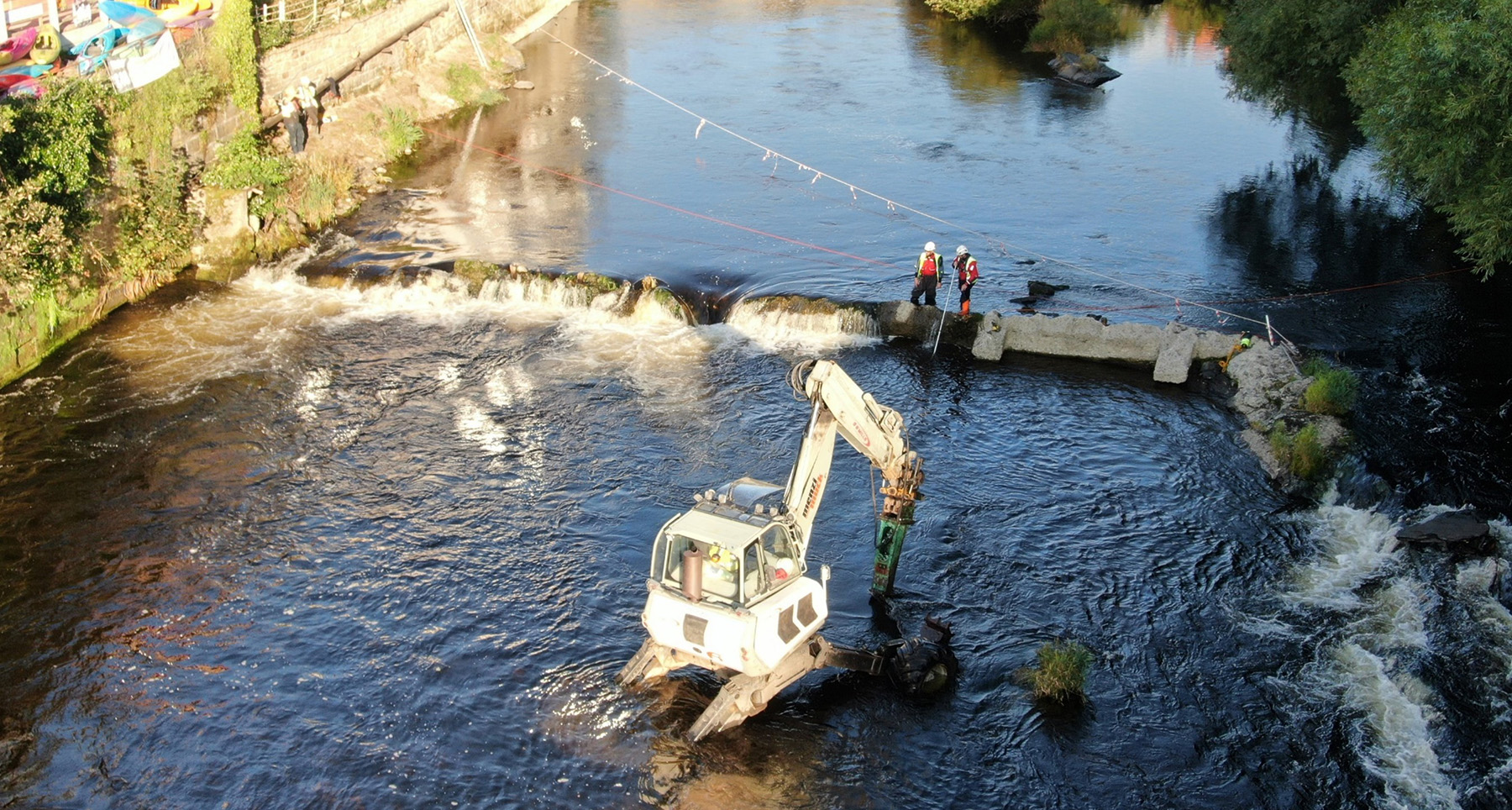 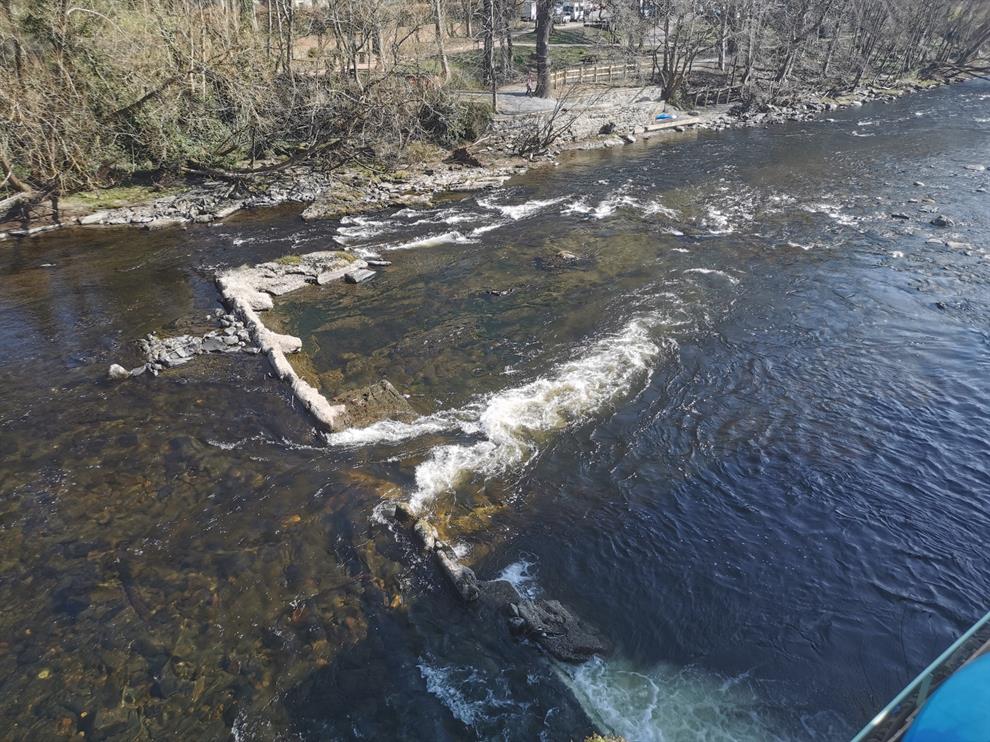 In addition, the nearby kayak/raft egress ramp that provided access to the river was replaced, since it had been damaged during the access to the river. Specifically, a large platform and a series of steps were created (Figure 8). The flat surfaces were covered in slate coming from a local quarry, while the historic elements of the site were carefully preserved and strengthened. Alternative egress points were created for recreational users during the works on the ramp. All works, both on the weir and the egress ramp, were coordinated by Cyfoeth Naturiol Cymru-Natural Resources Wales. 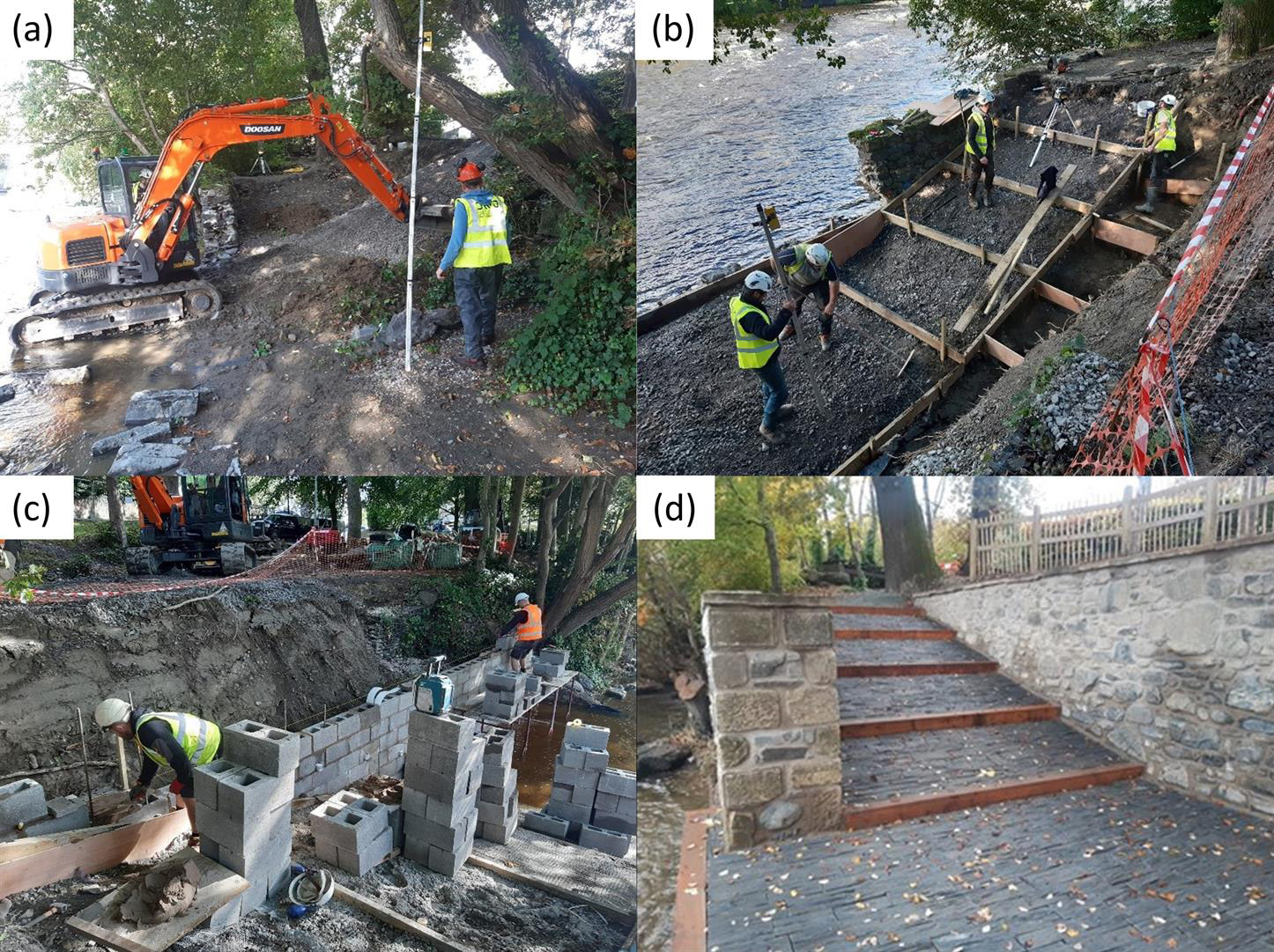 “It’s often we get involved in partnership projects that don’t happen but this one has and for the benefit of all. The work that has been done is fantastic and everything from the original consultancy to the actual work has been exceptional. Well done to all and let’s hope it’s the start of other fruitful projects in the future” 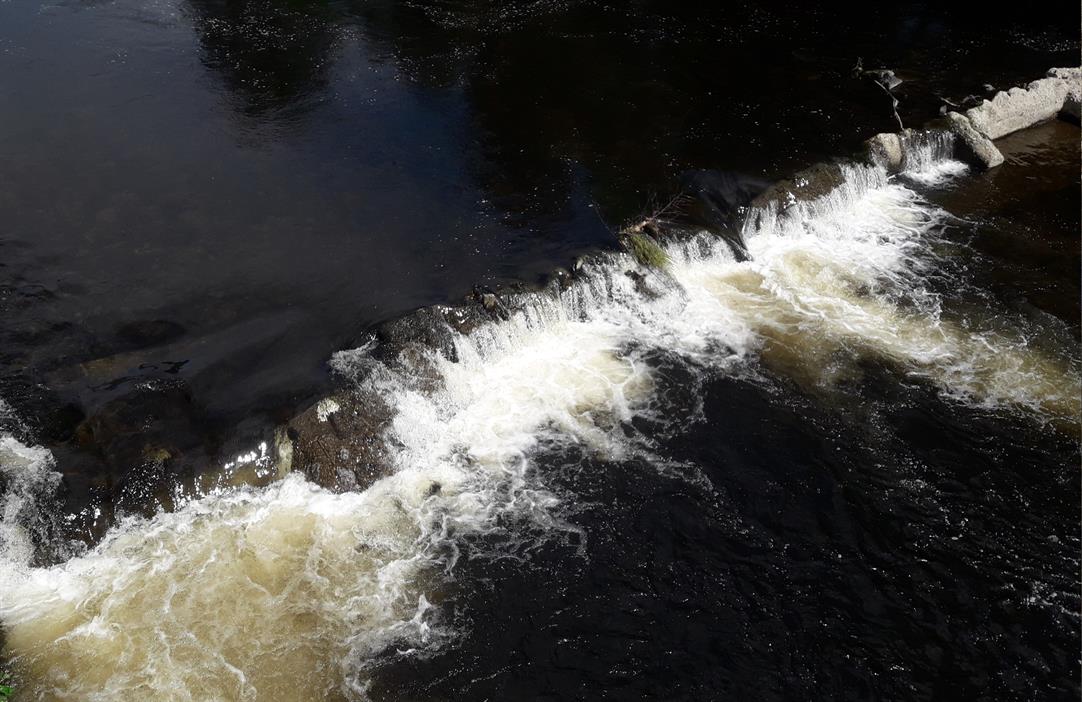 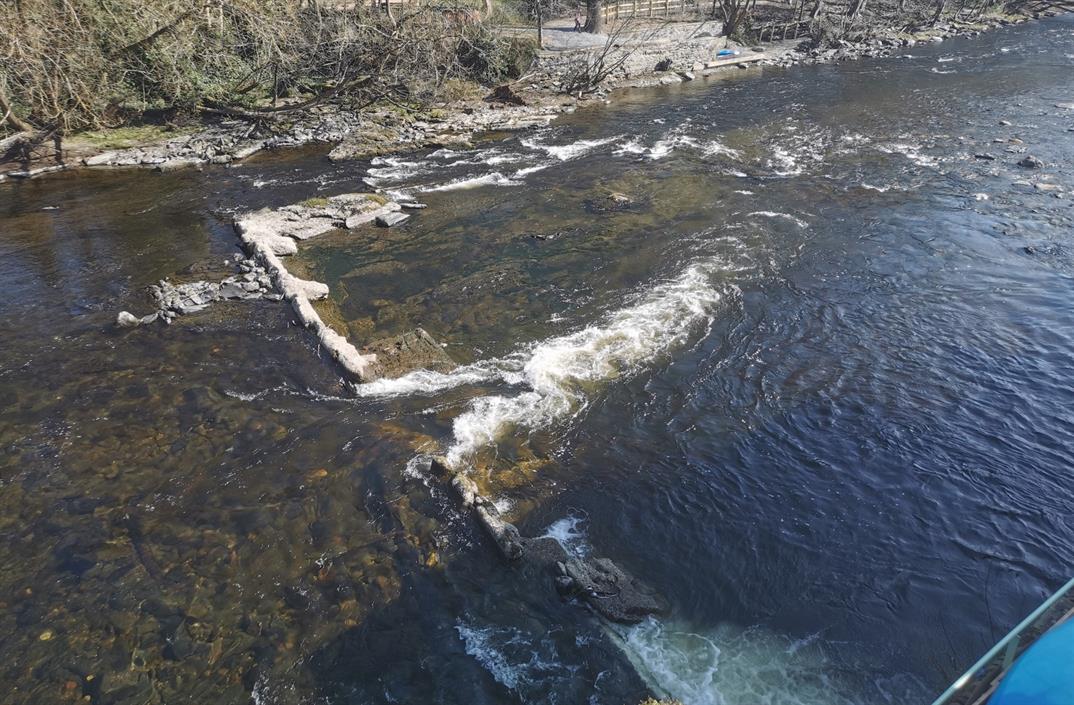 In 2021, three more barrier removals (partial or total) were executed within the framework of LIFEDeeRiver Project. In August 2021, a barrier was completely removed from River Meloch, a tributary of River Dee (Figure 9). This 1.5-m-high and 6-m-wide barrier was located ~200 m upstream of the confluence with River Dee (latitude: 52.919517, longitude: -3.560752) and was removed to improved passage for salmon, lamprey species, bullhead, eels and all other fish species found in the area. 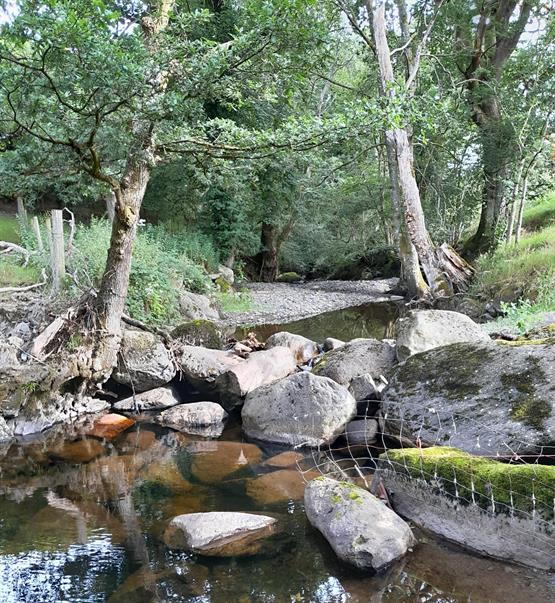 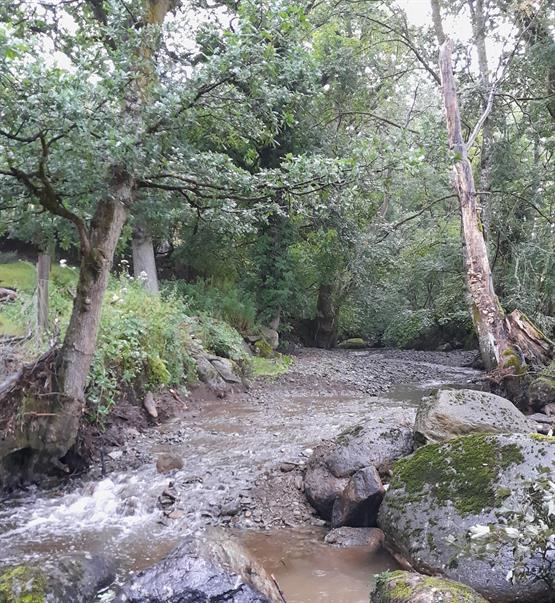 Figure 9. The removal site at River Meloch: (left) before and (right) after the removal operations of the barrier (photos by Cyfoeth Naturiol Cymru-Natural Resources Wales, LIFEDeeRiver)

In September 2021, a 3-m-wide notch was opened at the Llangollen Upper Weir (latitude: 52.970721, longitude: -3.172582) to allow improved upstream and downstream fish passage. In October of the same year, Morlas Weir, a 0.6-m-high and 12-m-wide structure was completely removed (Figure 10). It was located ~60 m upstream of the confluence of Morlas Brook (a key spawning tributary for Atlantic salmon) and the river Ceiriog (a major tributary of the River Dee) (latitude: 52.937723, longitude: -3.025245). Electrofishing surveys in 2020 and 2021 indicated that juvenile Atlantic salmon were present only below the Morlas Weir, meaning that it had been impassable to migrating adult individuals, at least for three consecutive years. 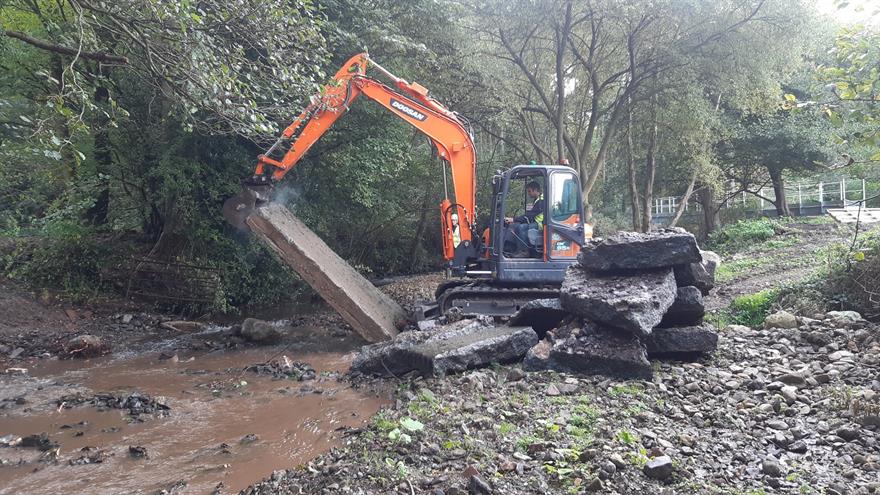 The ecological benefits of the Morlas Weir removal became obvious less than a year after the works were completed. In August 2022, juvenile Atlantic salmon were collected through electrofishing at three different locations above the site of the former barrier (Figure 11), indicating that adult Atlantic salmon have already reached and exploited the newly open section of the river. 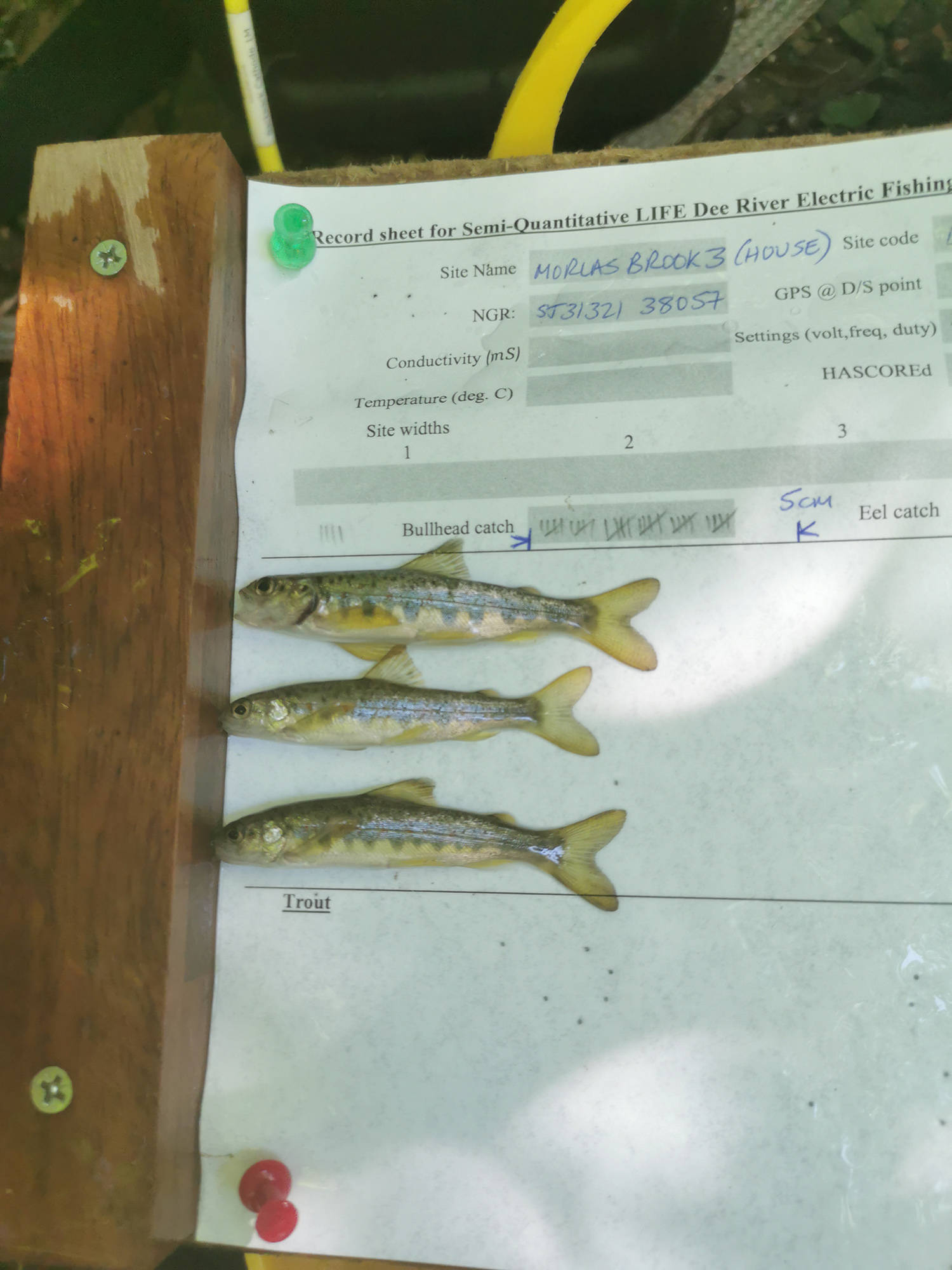 Figure 11. Juvenile Atlantic salmon caught via electrofishing at different locations above the site of the former Morlas Weir 10 months after the removal (photo by Cyfoeth Naturiol Cymru-Natural Resources Wales, LIFEDeeRiver)

Video 2. Electrofishing survey results from above the site of the former Morlas Weir 10 months after the removal (video by Cyfoeth Naturiol Cymru-Natural Resources Wales, LIFEDeeRiver)

With many thanks to Joel Rees-Jones from Cyfoeth Naturiol Cymru-Natural Resources Wales for providing the information, the photographs and videos presented herein.