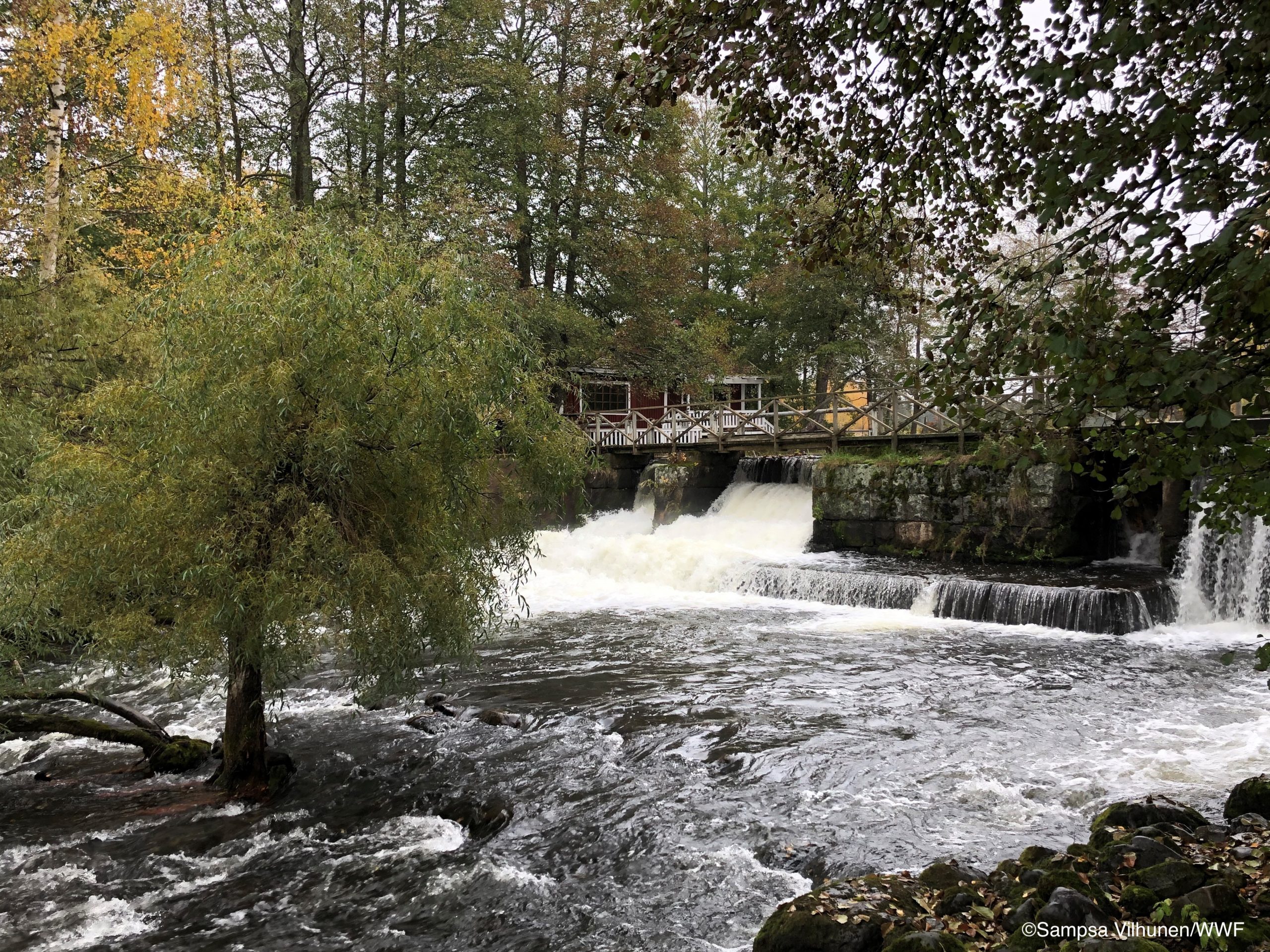 Text translated from an article by Joonas Fritze/WWF

The Tainionvirta River, which flows from Lake Jääsjärvi in ​​Hartola to Päijänne is a significant spawning river for endangered trout. However, the dam of the Virtaankoski hydropower plant, built in 1956, has prevented fish from spawning in their breeding areas. The hydropower plant has now changed ownership and the dam is scheduled to be dismantled in the coming years.

“Fortunately, we can repair the damage created by dams,” says Sampsa Vilhunen, WWF Finland’s Program Director. “Whenever a dam is demolished, it is a concrete and effective act to stop the loss of nature. Dam removal is like a silver bullet: a single measure with quick and lasting positive effects.” 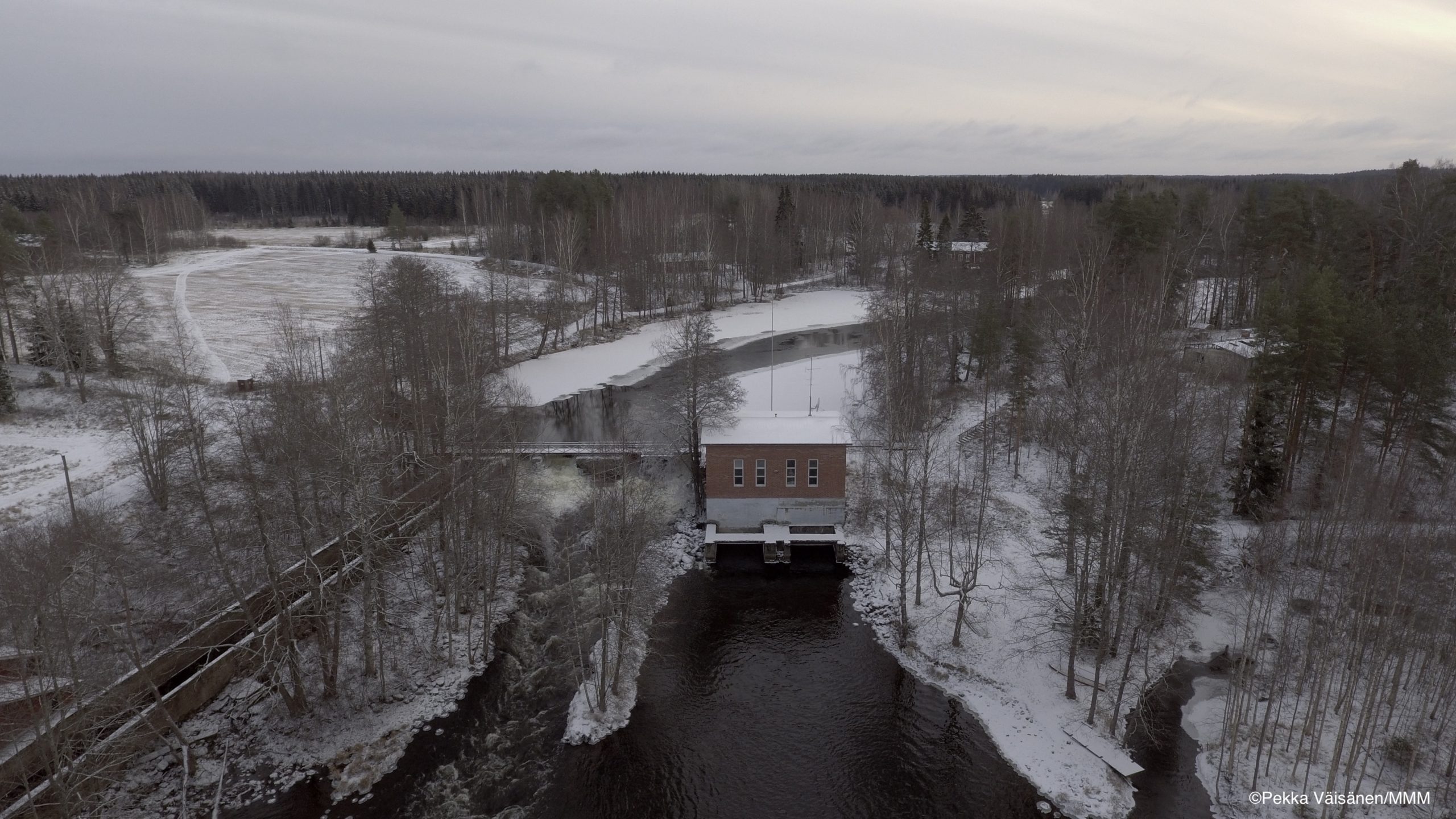 Aerial view of the dam and hydropower plant ©Pekka Väisänen

Although WWF has been involved in dismantling and bypassing many dams and other obstacles to fish migration, the Virtaankoski Dam removal plan announced in November is the most significant.

“The endangered trout stock in Päijänne has largely depended on stocking, as most of the breeding grounds of migratory fish have historically been behind dams. The fact that the Tainionvirta will flow freely for the first time in decades is a significant thing for trout in Finland’s second largest lake,” says Vilhunen.

The restoration of Virtaankoski River will be carried out in cooperation with the local residents and the municipality of Sysmä, preserving the valuable cultural landscape.

Cooperation is key for dam removal

The goal of the current Finnish state administration is to improve the status of migratory fish and endangered fish stocks in different parts of Finland with the support and measures of the national NOUSU program. WWF has been a key partner in the project in recent years. The state is able to finance 50 percent of the demolition of a dam, so financial support from WWF and private parties helps greatly in completing removals throughout the country. In Virtaankoski, WWF, together with the Lassi Leppinen Foundation, is currently the most significant private financier in the dismantling of the hydropower plant and the restoration of the rapids.

In recent years, dams have been demolished all over Finland. WWF has been involved in more than 40 projects to remove small and large dams and other obstacles to fish spawning or to build structures to help fish bypass or cross obstacles.

WWF together with partners is currently preparing dam removals as well as major bypass channels to remove the hiking obstacles and bypasses for instance in Hiitolanjoki, Myllykoski on the Kuusinkijoki River, Ämmäkoski in Varkaus, Lieviskänkoski in Puumala, Överby in Kirkkonummi, Keravanjoki in Järvenpää, and Broböle in Sipoo.

The Ministry of Agriculture and Forestry, the Pohjois-Savo Center for Business, Transport and the Environment, the Municipality of Sysmä, WWF and the Lassi Leppinen Foundation, as well as private donors, are participating in the redemption of the Virtaankoski power plant and the financing of the Virtaankoski restoration project. Part of the cost of the work done to promote the project has been covered by the European Maritime and Fisheries Fund’s (EMFF) ‘Vauhtia Vaellukseen’ project, which is carried out by WWF Finland.