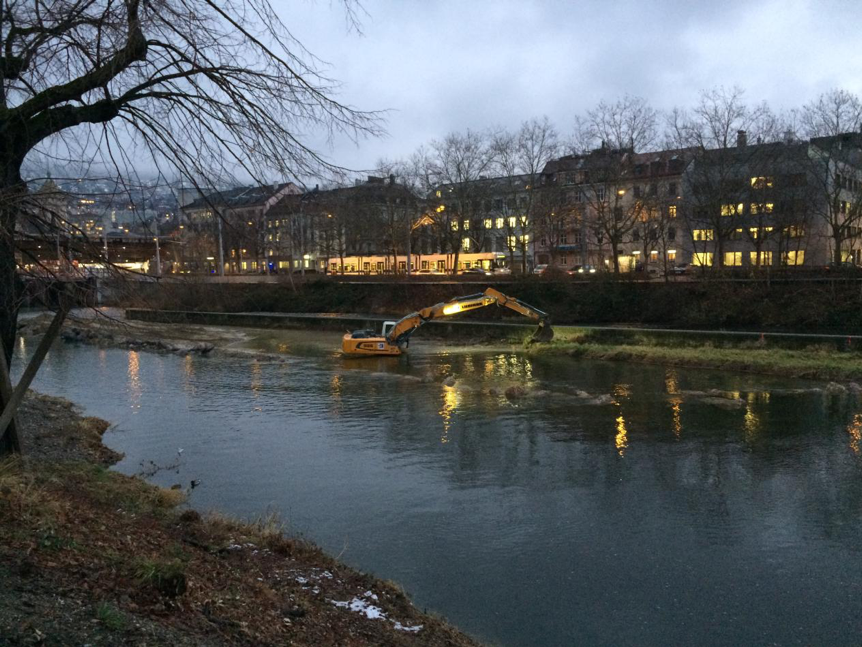 It is not often that a dam is demolished in the middle of one of Europe’s major cities but this is what happened in June 2018 in the centre of Zurich.

The Sihlpost Dam was situated in the River Sihl, a Swiss river that rises near the Drusberg mountain and eventually flows into the Limmat river in the centre of the city of Zürich. The river is 69km long and has a catchment area of 344 km2. The dam was a longitudinal concrete barrier fifty meters long and two meters high akin to a dividing wall down the middle of the river, just upstream from the city’s main railway station. The Sihl had been a very important route for twenty-five species of migratory fishes in the past, such as grayling, salmon and nase, and by removing the dam and carrying out related measures to restore the river, it was hoped that the potential for new and diverse fish habitats would be increased.

The dam was most probably built to stabilize the banks where the waters of the Sihl were met by those flowing from the Schanzengraben moat, one of the last remains of the Baroque fortifications of Zurich. But this had negative impacts on the river: the moat and river were separated by the wall, the banks were shut off from the main flow and the diversity of river habitats was diminished. At least fifty meters upstream and downstream of the barrier were affected.

The opportunity to remove the dam came when the Swiss Federal Railways wanted to expand the main railway station in Zurich. They were required to carry out compensation measures by the Canton of Zurich and City of Zurich and this dam removal and related river restoration were part of those measures. The Sihlpost Dam was chosen because it was located next to the main station and, as the river flows beneath the station, it was directly impacted by the expansion plans.

The aim of the removal was to develop new and diverse habitats for the different fish species in the river by ridding the Sihl river and Schanzengraben moat of unnecessary concrete structures.

In preparation for the removal, standard fish surveys were carried out which looked at the spectrum of species occurring in this stretch of the river. The target species were primarily nase and grayling but also included other rheophilic species such as trout, chub, schneider and salmon. All these species, except the salmon, were still present in the Sihl but in very small populations.

The total budget for the removal, and other restoration measures, was around 420,000 Swiss francs. The funds came from the Swiss government, the Canton and City of Zurich and the World Wide Fund for Nature (WWF). The dam was removed as part of a larger plan to restore Swiss rivers and, within that plan, to restore the Sihl.

The removal was begun in October 2017 by a construction company and completed in June 2018. Along with the railway company, the Canton and City authorities, and the ecohydrological bureau Flussbau AG, the project received financial support and help with promotion and media communications from WWF.

The dam was demolished and removed by several diggers, as you can see in the excellent video made by WWF (link below). Large sandbags were used as a barrier to stop broken concrete from getting into the water stream and habitat restoration included gravel fills and the creation of new structures in the river with deadwood, rocks and root stocks. 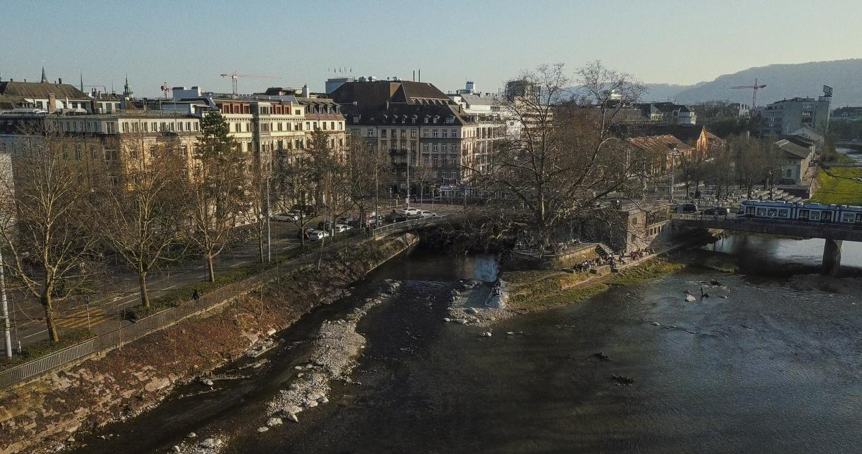 Christian Hossli, Project Manager for WWF Switzerland, recently told Dam Removal Europe that the river is currently being monitored for the important fish species but it is too early to properly gauge the long-term effects.

However, the project in general was considered such a success that WWF, along with its partners, took the opportunity to highlight the work by holding an event to launch the AMBER Citizen Science Project right next to the old dam site near the central railway station.

And just after the the greatest part of the concrete barrier had been removed, nase were seen passing the project site, possibly looking for places to spawn.

What a good result for fishes and people!

With many thanks to Christian Hossli and WWF Switzerland for the information and images!