The removal of the Krebsbach dam was an important landmark for Germany as it was the first large dam removal that Germany had undertaken.

The Krebsbach Dam was situated on a small stream which flows into the Weiβe Elster river, part of the River Elbe basin in the east of Germany, province of Thuringia. 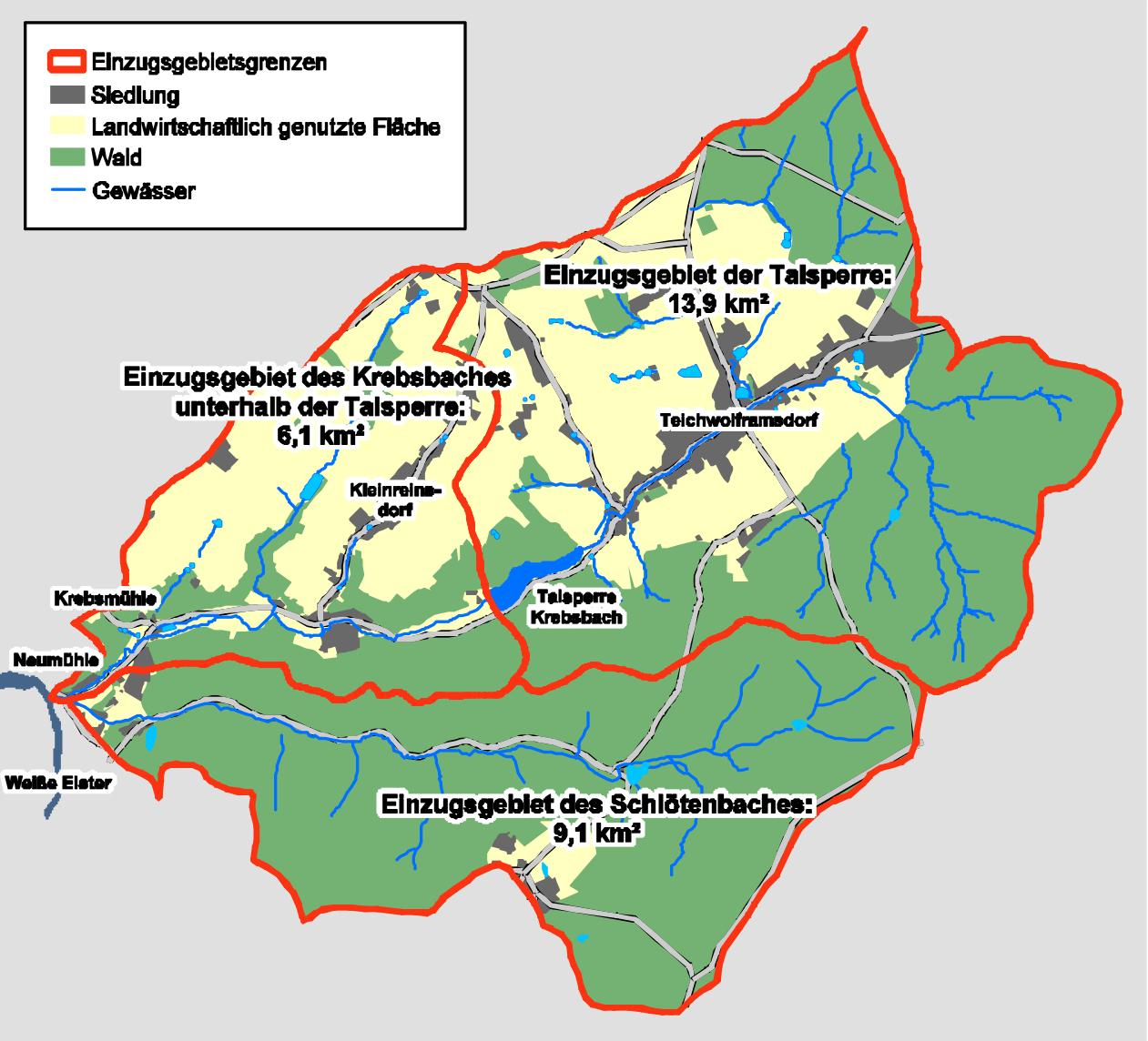 The dam was built in 1962 by SAG/SDAG Wismut, a large mining company in East Germany during the time of the Cold War. Although the flow was small, the stream was valuable as an industrial water supply for the mining of uranium. The dam was 18.5m high and was of stone construction with an inner core of clay.

In 1985, after mining had stopped, the dam was abandoned and, by the 1990’s, stability problems had worsened and the dam was suffering from structural damage. New laws dealing with security and safety risks associated with flooding forced the owners, the Thüringer Fernwasserversorgung (a water supply company owned by the regional Government) into action. Comprehensive restoration and continuing maintenance of the dam would have been expensive and, in order to meet the new regulations, in 1998 the water company decided to demolish the dam completely. The aim was to remove the dam and all the technical equipment associated with uranium processing and to restore the continuity of flow for the waters in the stream. But before removal could start, planning approval had to be sought in line with Germany’s Water Resources Act.

By 2001, planning for removal had begun. The planning procedure had to break new ground as there was no precedent in Germany for the demolition of a large dam: an environmental impact study was carried out, a landscape conservation plan was written and stakeholders, including the public and those concerned about effects on the environment, were asked for their opinions. The planners received fifty-three responses which were discussed in detail at a public meeting in May 2003. The main concern of local residents was that there would be a greater risk of flooding to the downstream stretches after the dam had gone.

The Environmental Impact Assessment and Landscape Conservation Plan were approved in 2005 and preparations for removal started in 2007. Although sedimentation was relatively low – 35cm on average in the reservoir rising to 2.5m close to the dam itself – a sedimentation pool was created directly downstream of the dam structure to minimise the transport of sediment and demolition-related discharge into the stream’s lower reaches. All the fishes, amphibians and shellfish were relocated from the whole length of the stream (as it was assumed that water quality would deteriorate) and then the reservoir was drained and the dam completely demolished. 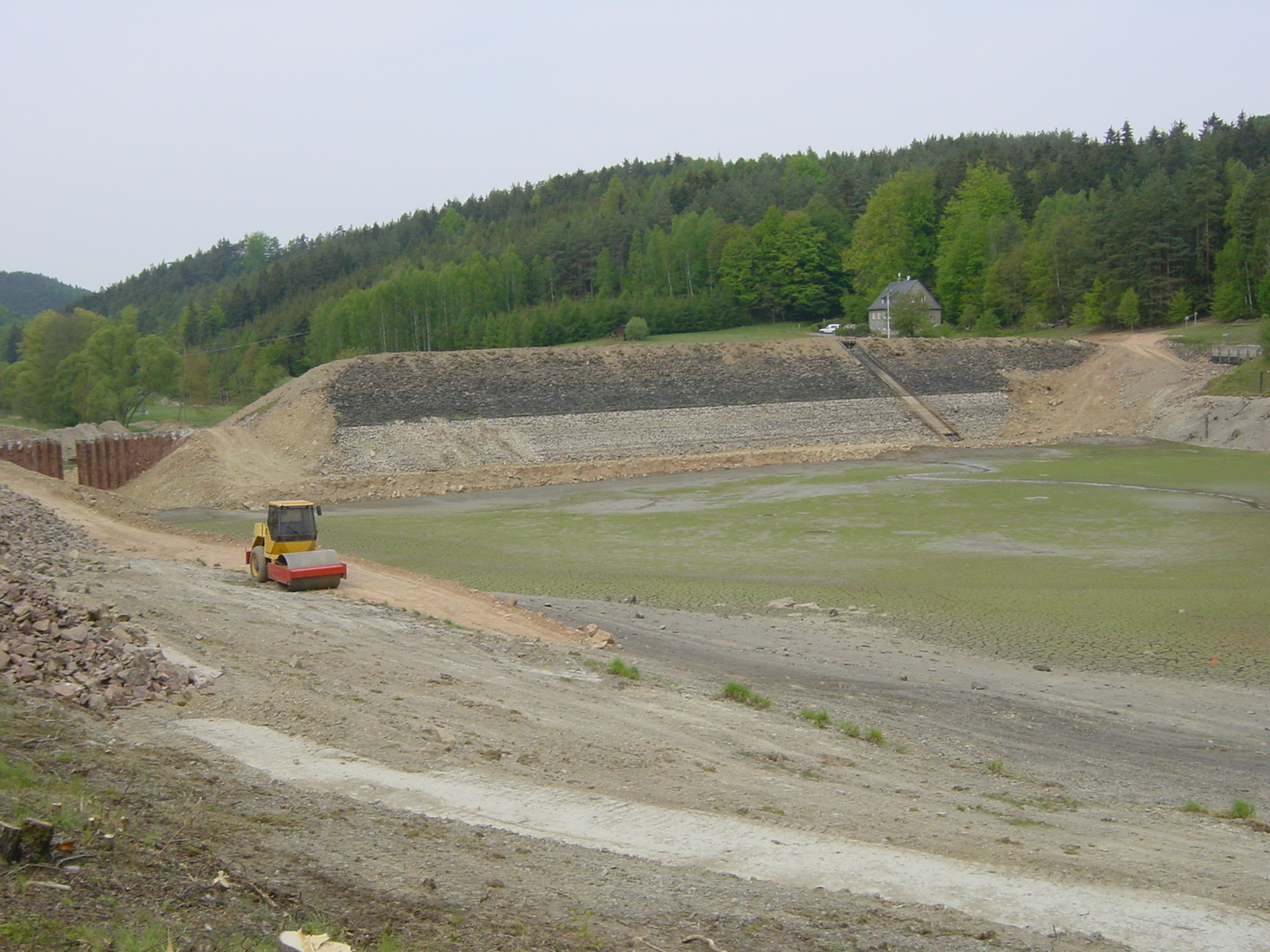 Dam removal in progress in 2007

Actions to mitigate some of the effects of removal, which were already provided for in the Landscape Conservation Plan, included: the creation of two new flood pools; the dismantling of three structures crossing the stream below the dam which were obstacles to migrating fish; the widening of the stream bed downstream of the dam site; plus a variety of measures to enhance the ecological value of the surrounding area.

But how to address the flood risk concerns of local people living close to the downstream stretches? The unique and innovatory solution that engineers devised was the modification of the stream bed in the area of the old reservoir to create a pre-shaped, meandering channel which increased the length of the stream in this area from 0.7km to 1.4km, thereby increasing its hydraulic capacity. This intervention was designed to protect villages downstream from the possibly greater threat of flooding after the dam was removed.

With the stream now lengthened, a new wetland was created which, it was hoped, would increase biodiversity. 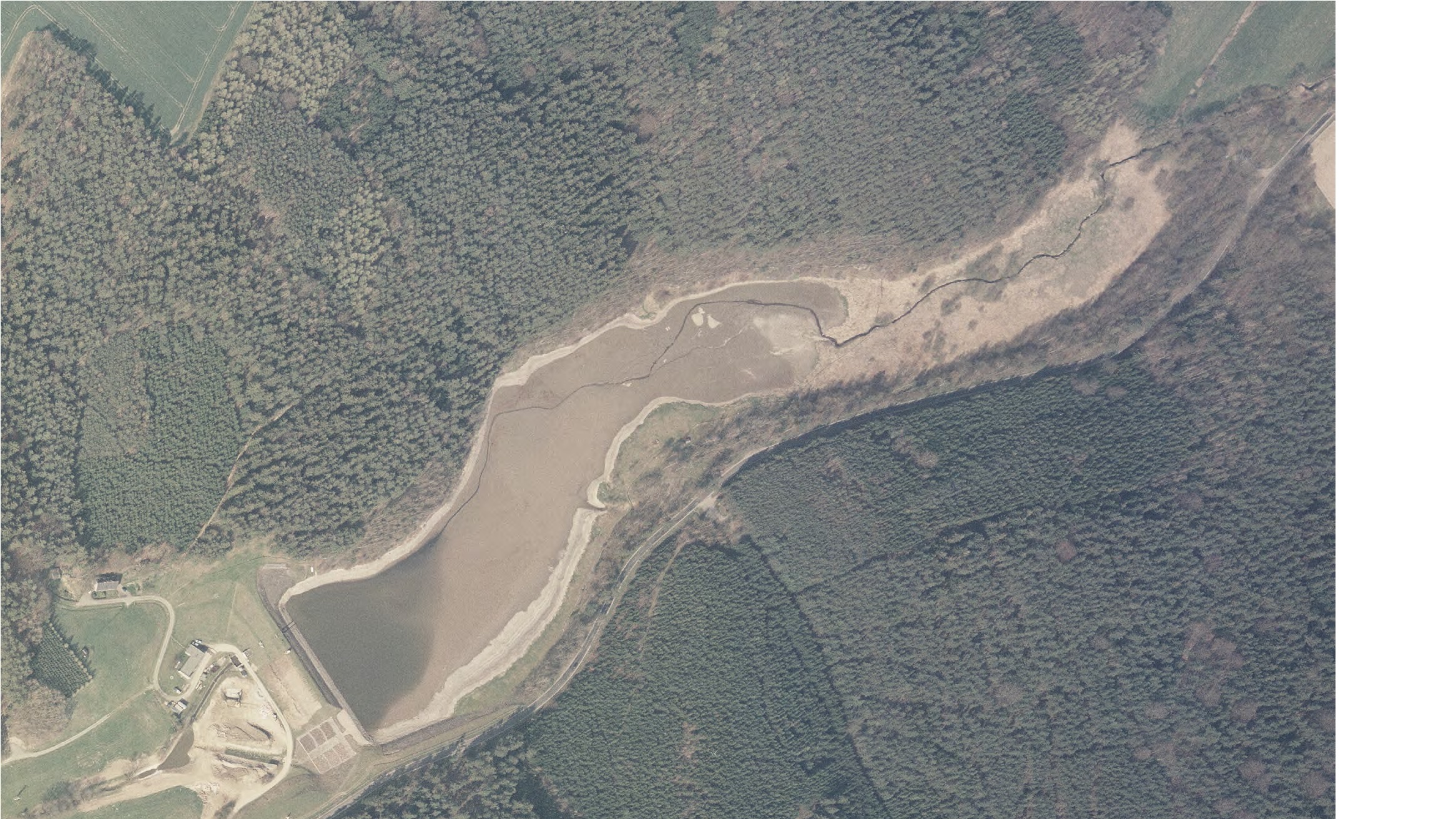 Aerial view of dam and reservoir before dam removal 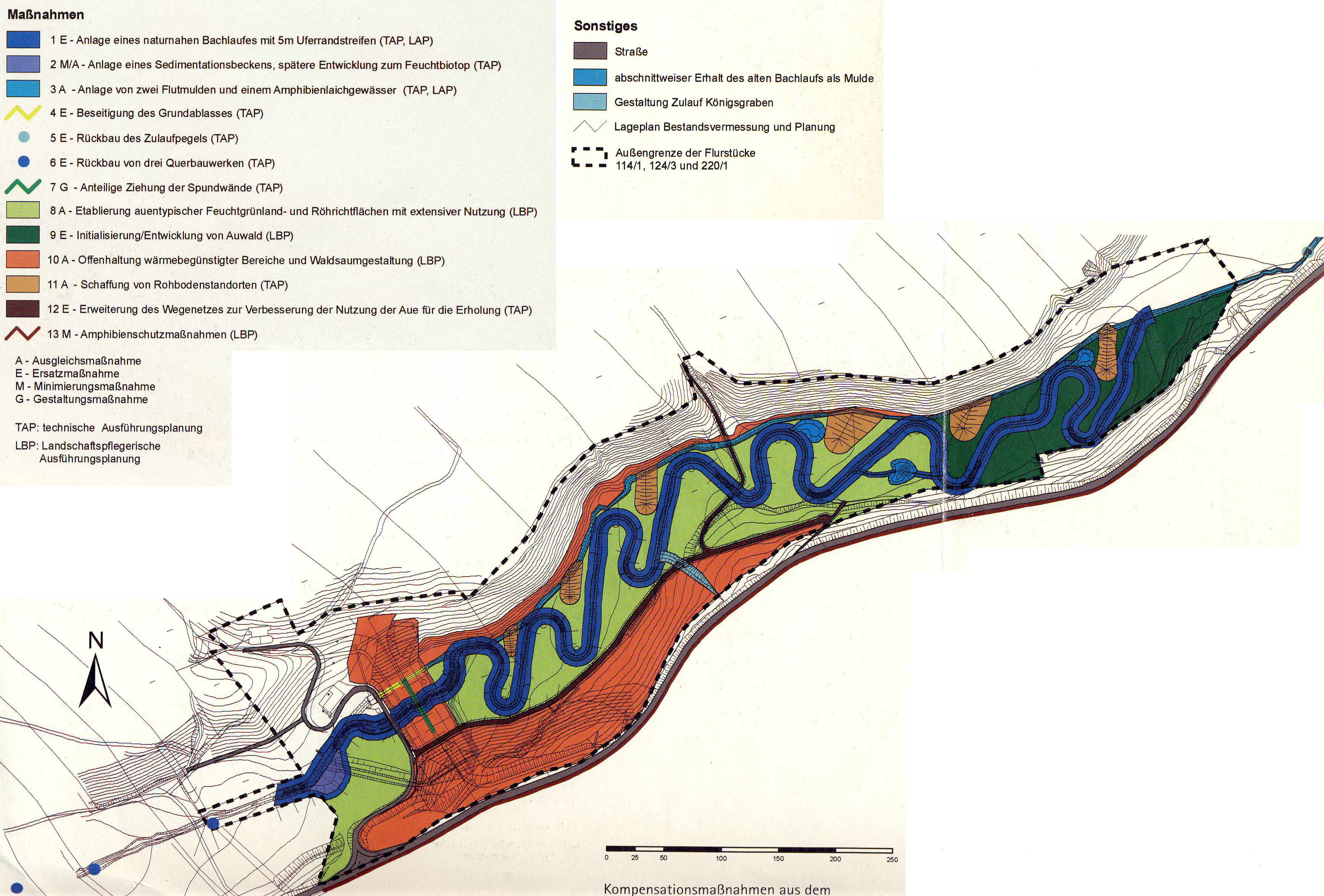 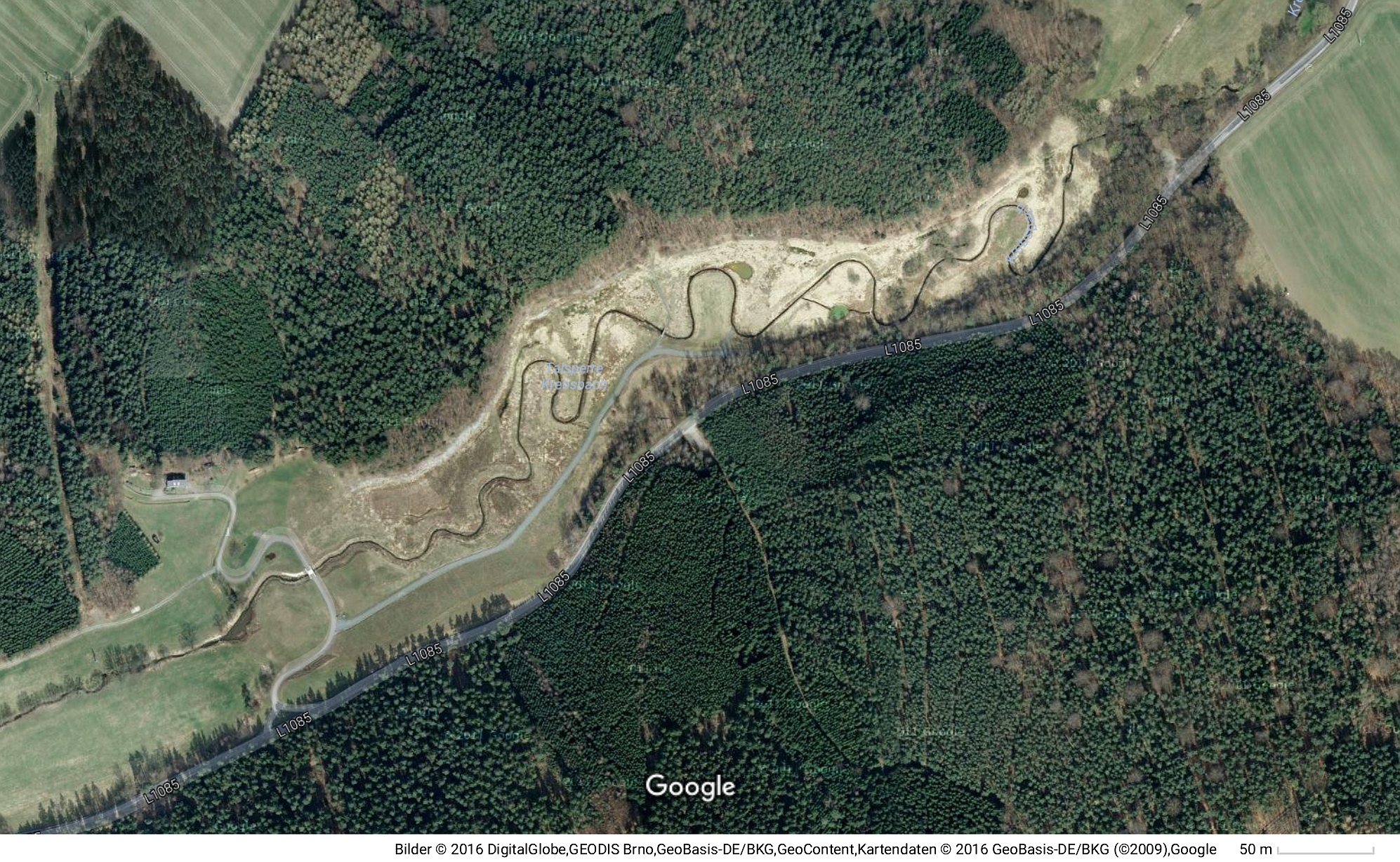 Aerial view after dam removal and creation of the new channel

The total cost of the project was 1.2 million Euros including the planning approval procedure.

The dam was finally removed in 2007 and, one year after removal, the former reservoir area was developing mostly as planned: the new channel was stable, there was only a small amount of erosion and species diversity was returning. 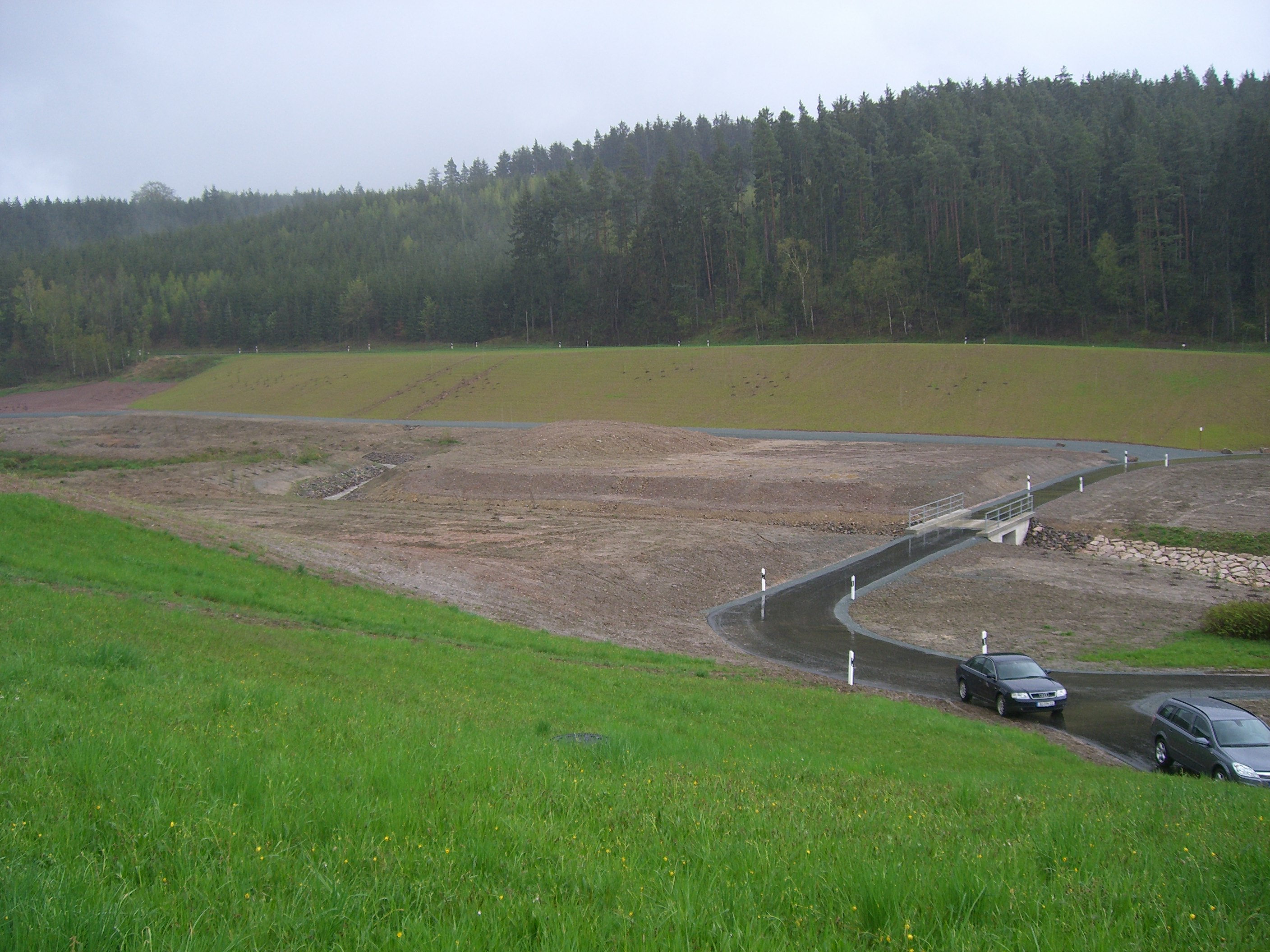 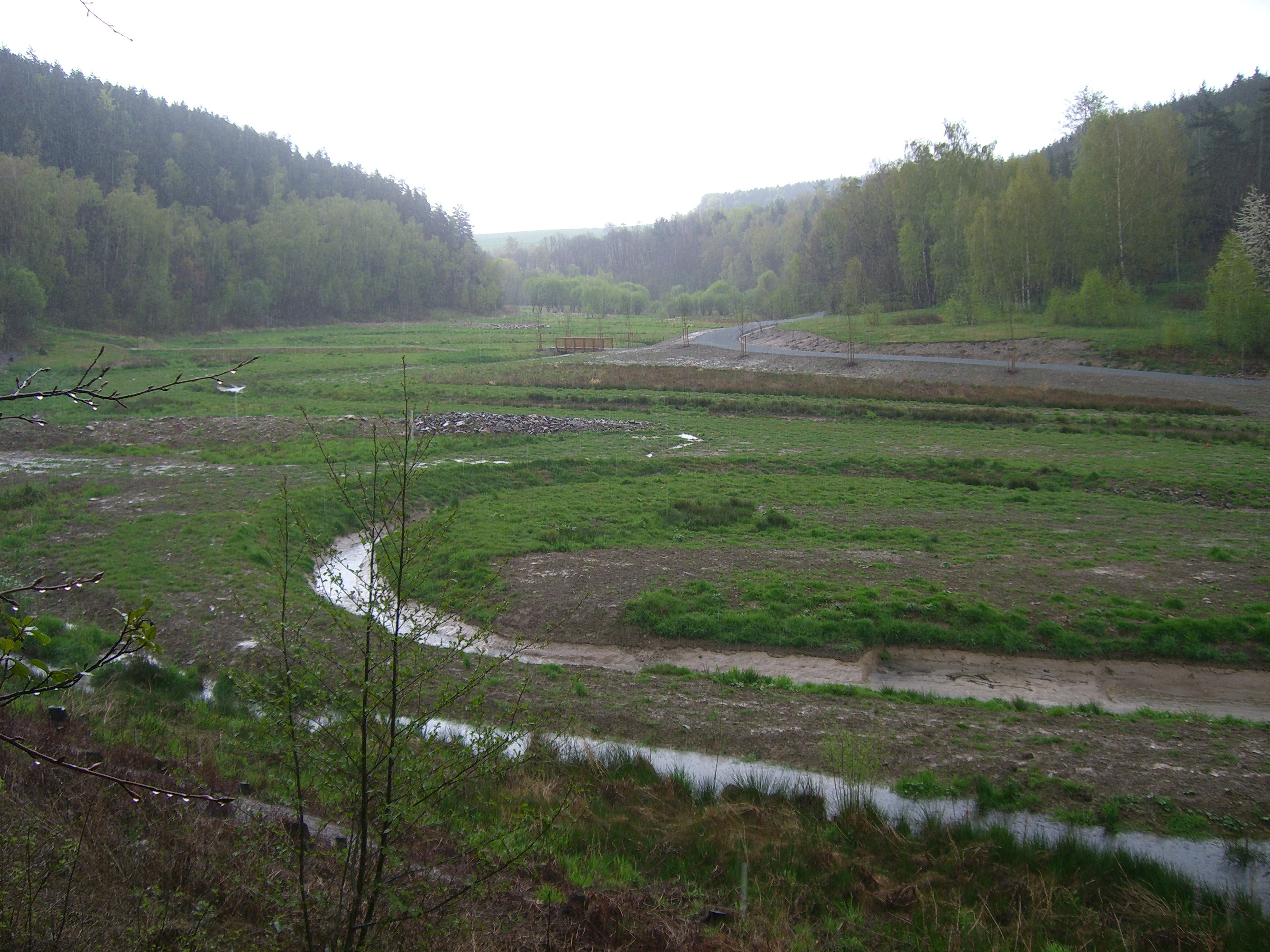 April 2008. The first spring after removal – vegetation begins to grow along the meanders 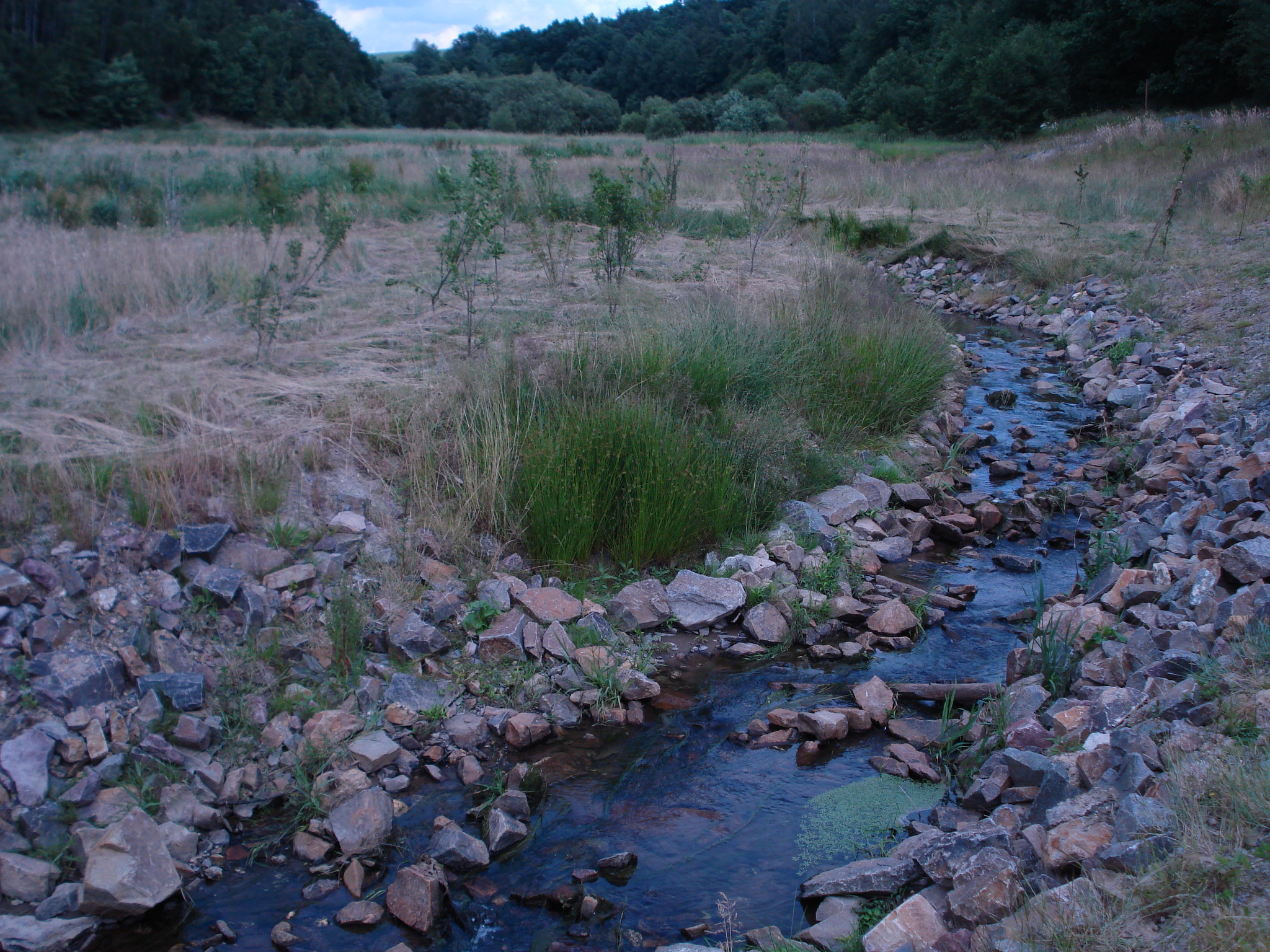 July 2008. The stream flowing along the new channel

Monitoring of the effects of removal was carried out until 2017. The number of macrozoobenthos, such as insect larvae, molluscs and small crustaceans, increased (in 2010 there were 22 species recorded) and the vegetation grew quickly but all were affected by pollutants and nitrification from upstream agricultural activities and waste water from a small town above the dam site: nettles and willows grew more abundantly than were expected. 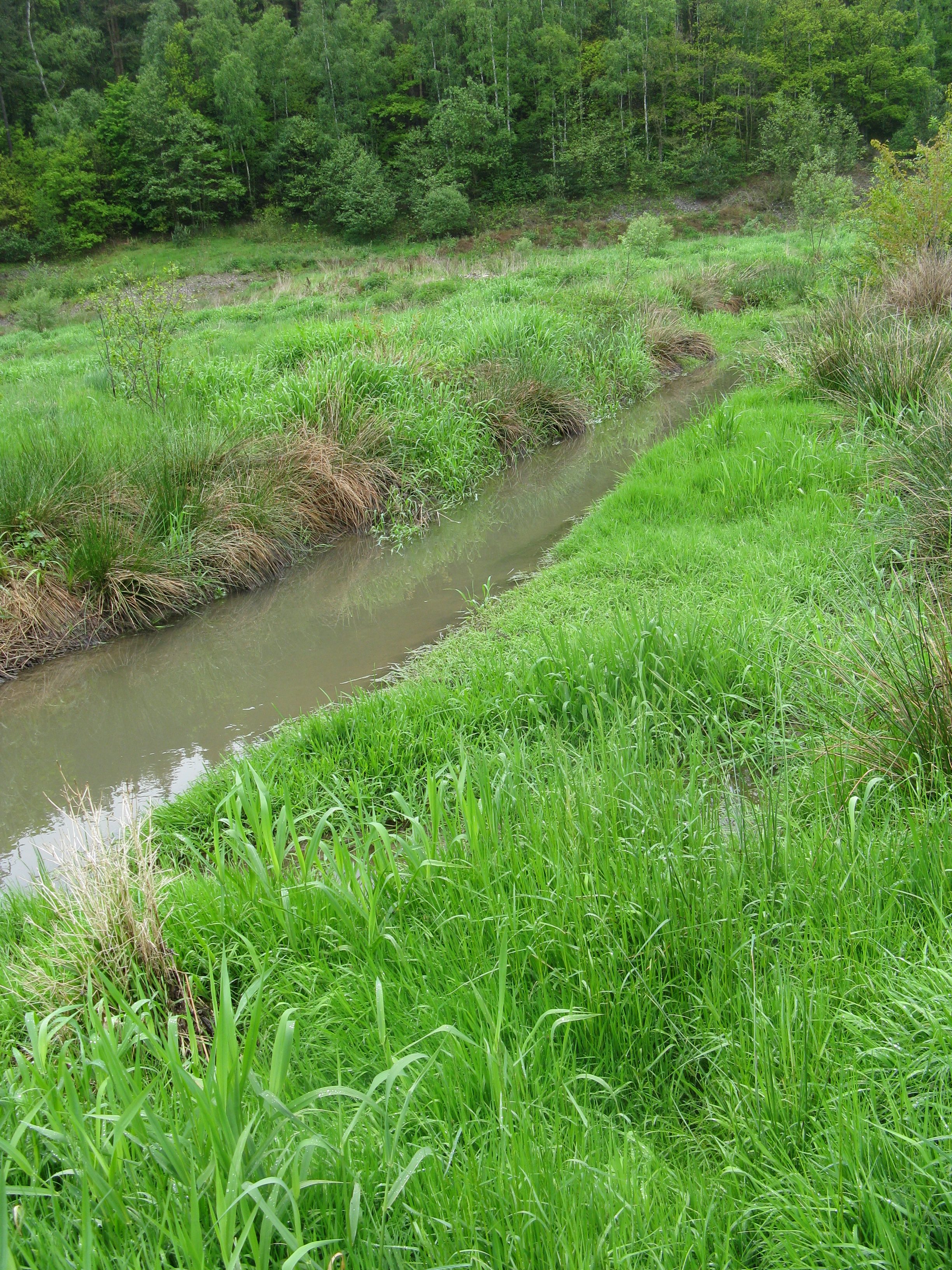 Vegetation growth beside the new channel in 2010

Re-population of fish species originated from the larger river downstream and some tributaries. Fishes have returned slowly and, in 2010, 6 fish species were recorded:

By 2017, the species diversity had slowly improved. This was mainly due to:

During the planning process, it was assumed by planners that water quality would decrease but the opposite has occurred: water quality has improved in the downstream stretches and, with this, the number of species.

Two aspects of the new channel might have been improved at the planning stage:

The Krebsbach Dam removal, with its modified channel and new meanders, is a good example of what can be achieved to mitigate the possible effects of flooding downstream after the removal of a large dam. It is an example which could be followed elsewhere. Local people living downstream of dams which have removal plans will naturally have concerns about flooding after the dam has gone. The creation of an artificial channel does take more time and money than leaving the the drained reservoir to develop naturally and is easier if the level of sedimentation is not high, which applies to most regions in Germany north of the Danube River. This solution could be particularly suitable in areas with a high population density and if local people are living close to the river.

With many thanks to Ercan Ayboga for images and source material.