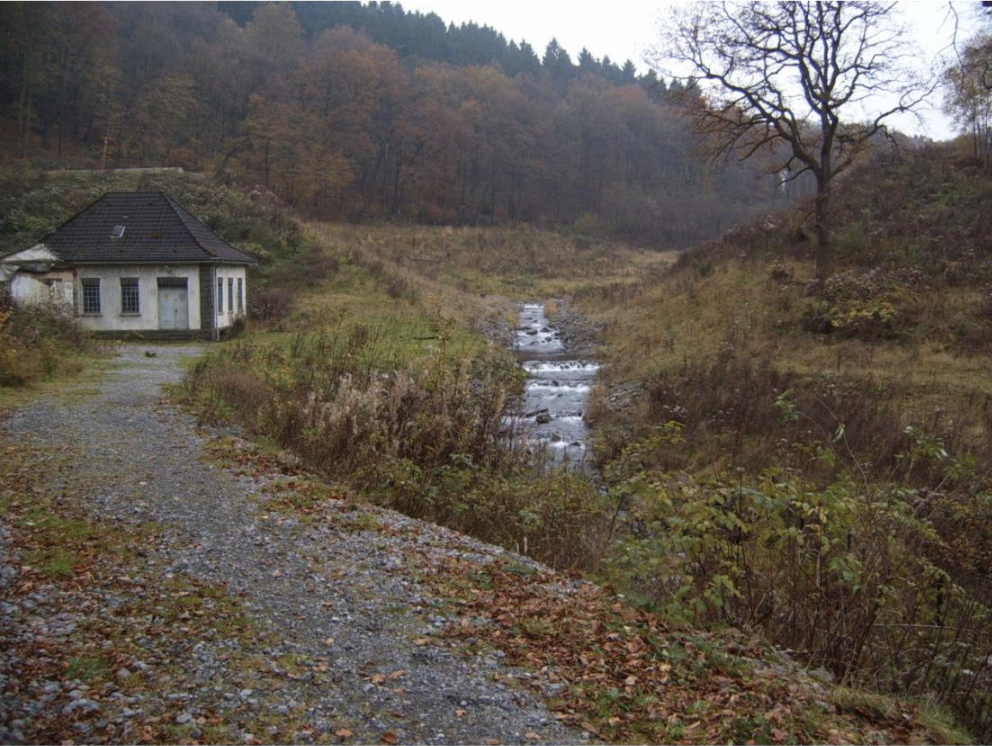 The dam was situated in Bergisches Land, a low mountain range in the state of North-Rhine Westphalia, and located on the Herbringhauser Bach (Herbringhauser Stream) south of Langerfeld, shortly before the Bach flows into the the Wupper River.

The Lower Herbringhauser Dam was a relatively small dam built to provide additional water storage for the larger Upper Herbringhauser dam. The upper dam had no capacity to store drinking water and the extra water in the reservoir of the lower dam was pumped back up into the upper dam to supply potable water to the nearby city of Wuppertal.

The lower dam was built in 1926/27 and put into operation in 1928. The hamlet of Hilgershammer containing several houses and their inhabitants had to make way for its construction. The barrier structure was a rock-filled dam with a concrete core. At completion, it was 19.5m high above the valley bottom and 103m wide. When at full capacity, its reservoir was 200m in length, 197m deep and had a surface area of 4 ha. It was able to store 0.18 million m3 from a catchment area of 9.2 km2. 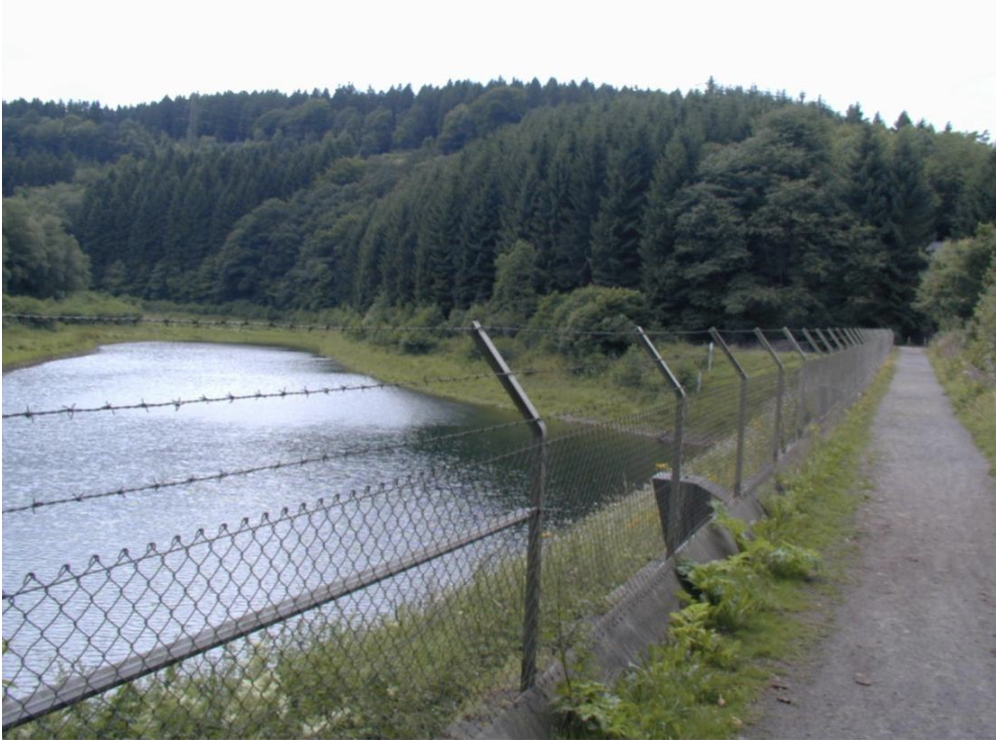 The reservoir viewed from the road across the dam before removal

By the original uploader Morty at German Wikipedia.

In the 1980s, the lower dam was no longer needed for a water supply and, like many small redundant dams, fell into disuse. Although the dam structure was kept in good repair for some years, no new purpose was found for the dam and the owners, the Wuppertaler Stadtwerke (WSW – the Wupper Valleys Municipal Utilities), did not want to spend money unnecessarily on restoration and could not find another operator to take it over.

The decision to remove the dam was strengthened when an assessment in the 1990s found that the dam’s structural safety could not be secured during a flood which may occur every 5000 years. A flood of this size would have endangered those people living downstream. In 1998, the WSW decided to remove the dam but this was conditional on the dam remaining until the Upper Herbringhauser dam, a much larger dam, had been renovated.

The WSW wanted an orderly removal of the lower dam and in 2002 took the first steps: a comprehensive ecological impact study was commissioned to survey the vegetation and populations of breeding birds, amphibians, reptiles, fishes and macrozoobenthos in the stream and around the dam. The effects of partial or complete dismantling of the dam were then assessed. Chemical analyses also evaluated the sediments for heavy metals and nutrients flowing into the stream but the planning process was interrupted due to the renovation of the Upper Herbringhauser dam. 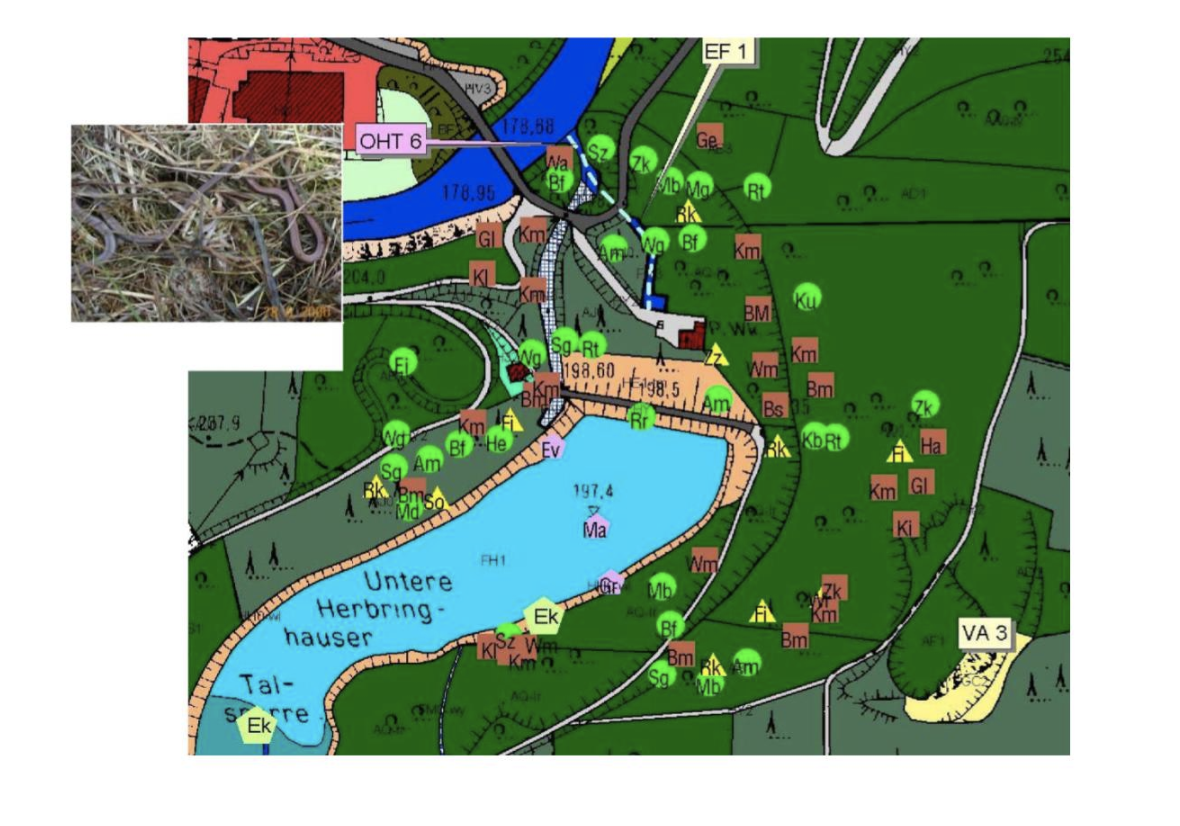 Survey map showing records of breeding birds, amphibians and reptiles in the vicinity of the dam and reservoir

However, there were continuing doubts about the stability of the lower dam and, in November 2005, the district government in Düsseldorf, stating ‘exigent circumstances’, requested, with an administrative order, that the operator should decommission the dam immediately. The two-month planning process was carried out in consultation with the engineering company Projektwerk Ingenieurgesellschaft mbH. In order to make the mechanism for approving the plan, and actions to be taken, as quick and simple as possible, it was decided to use the principles of ‘lean procedure’ to direct the decision-making process. As the Herbringhauser Bach is many times smaller than the Wupper river, which it flows into only 200 meters below the dam site, and no settlements exist along this length of the Bach, it was not considered necessary to do an analysis of flood risk after the dam was removed or further sediment assessment as the height of the deposited sediment against the dam wall was only 1.5 meters. Although not obligatory, many stakeholders particularly environmental organisations were involved and, after an on-site inspection, all participants agreed that the area would be left to natural succession.

Despite unfavourable weather conditions, the dam was removed over four weeks, beginning at the end of December 2005. The deconstruction company employees gave up part of their Christmas holidays to make sure the demolition was completed on schedule by 27th January 2006 and, although it was urgent, the removal was carefully carried out to conserve water quality and the surrounding landscape as the dam was in a nature reserve and an area popular for recreation.

The first step was to remove the fish in the impoundment in order to drain the reservoir. After the reservoir was emptied, 80m of the dam, from the original crest length of 103m, was dismantled and the bottom outlet was removed. An area of concrete river bed was also removed at the request of environmental organisations. The river bed and banks of the former dam reach have been strengthened with stone and several steps of 20-30cm in height have been created in order to overcome the height difference above and below the dam site of two meters. Thus erosion has been prevented and connectivity is ensured. 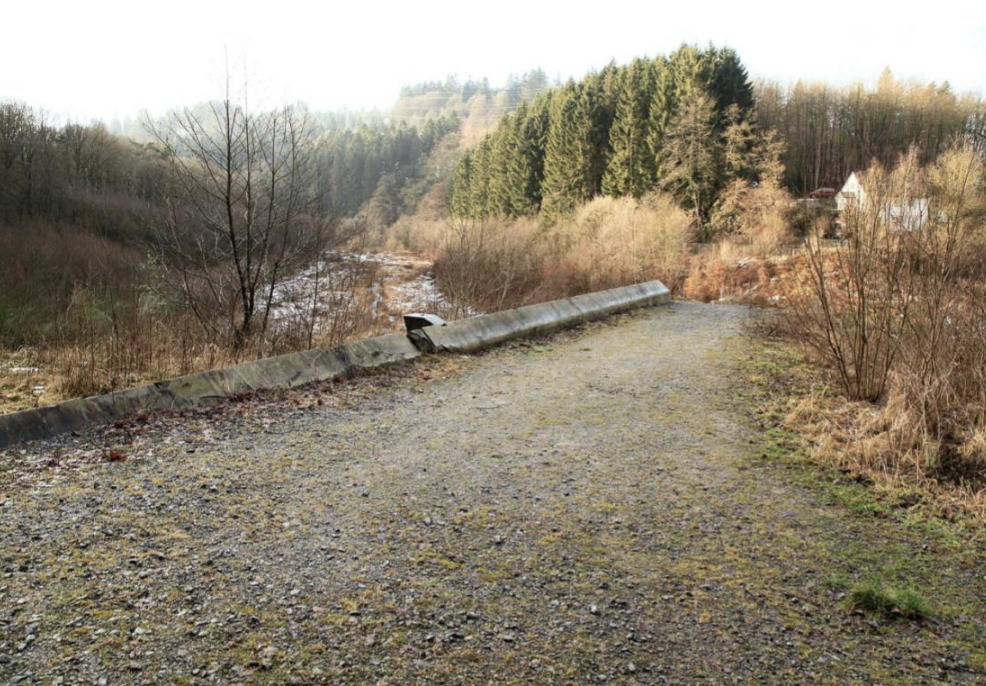 After removal the road over the dam ends abruptly

This was always intended to be a partial removal as the dam and its pump house were already listed as a historical monument. As a result, a significant part of the dam body is still intact. The natural stone bridge as well as a weir with an impoundment for amphibians upstream of the former dam site have been preserved

In order to allow natural succession to take place and to stop visitors from sinking into the deposited sediment, the dam site and empty reservoir were blocked off for several months. The aim was that the area would be developed as a wetland. Natural processes have benefited from the removal of the dam and nearly seven kilometers of water course have been re-connected to the Wupper River. The Herbringhauser Valley (Herbringhauser Bachtal) is a nature reserve where the dismantling of such a barrier has many environmental gains. Continuity has been restored to the course of the Herbringhauser Bach allowing migrating fish to move from the Wupper River into the upper stretches. In the small valley, where the reservoir once was, an intact and naturally-functioning floodplain has emerged. This part of the Herbringhauser Valley has returned to Nature. 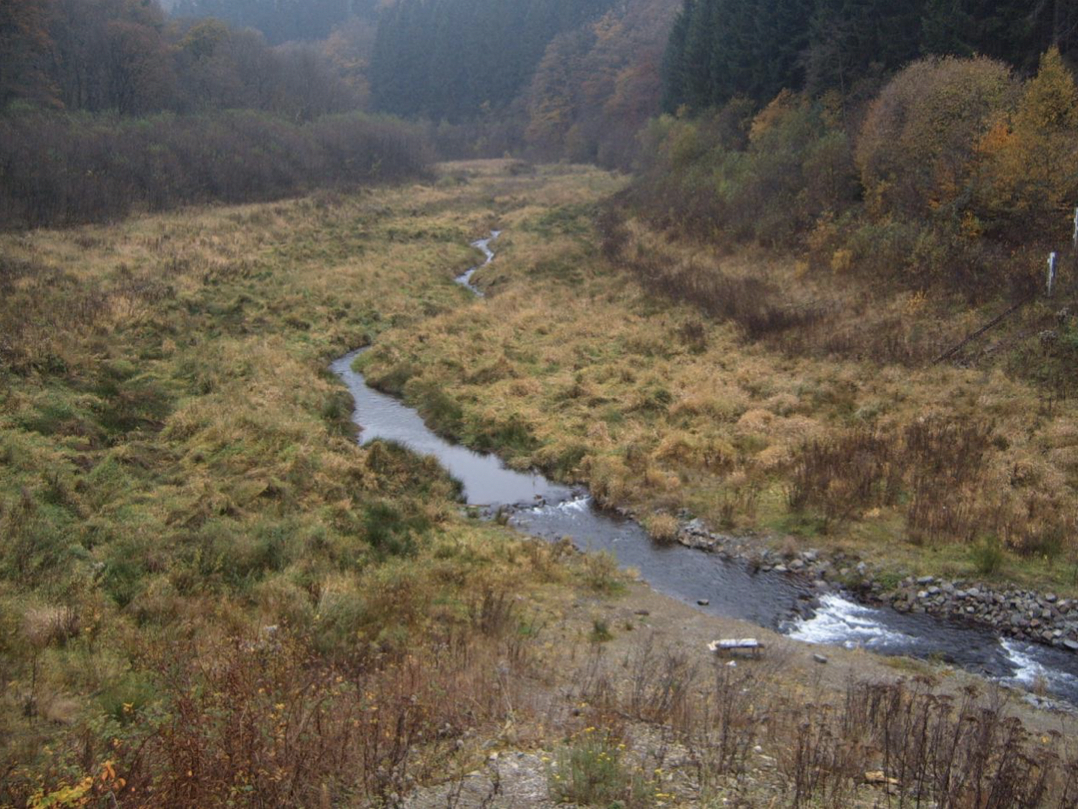 The former impoundment in 2008 (Photo by Ercan Ayboga)

Due to the demolition, several hiking trails leading over the dam crown had to be re-routed, including the Wuppertal (Wupper Valley) Circular Path. An alternative hiking trail has been created below the dam site. Visitors can also sit on a bench overlooking the remains of the dam and read about its history on an information board.

For several years after the removal, the WSW implemented a voluntary programme to monitor the flora and fauna to establish how naturally the dam impoundment area was developing.

With many thanks again to Ercan Ayboga for photos and information.