On the face of it, the removal of the barriers at the Klintarp Dam may seem unexceptional but look more closely and this removal is remarkable as it was carried out by a small privately-run company.

Naturentreprenad Syd AB was founded by Fredrik and Andrea Lundblad with the express aim to remove fish migration barriers and to restore lost spawning and nursery habitats for salmonids and other fish in Swedish rivers and streams.

Andrea takes up the story:

Fredrik started this company in 2009. Ever since he was little, Fredrik has had a big interest in wildlife and rivers. As a child he was fishing a lot and gradually he became aware of all the problems we humans have caused, such as the construction of dams, canalization and the removal of boulders, stones, fallen trees and large woody debris from rivers and streams.

When he became an adult he realised that the restoration of rivers was going too slowly so he decided to start doing something himself. After some years using only his own physical strength and occasionally assisted by hired equipment, he decided to buy his first excavator. Then the hunt for his first big job began. He started a campaign to show the County Administrative Board how easy and fruitful it can be to perform river and habitat restoration in co–operation with landowners. After a while, the Administrative Board began to appreciate the results and gave him more restoration jobs.

During this process, we made contact with an experienced biologist, Mikael Svensson, who works at the Swedish University of Agricultural Sciences and who also has a great interest in river restoration. We built a good relationship and from this point on we spoke every week about results and the development of river restoration work.

The river restoration we did on a small scale was a success and now we own four excavators, two trucks, three loaders and two dumpers. All of the machines are specially equipped and designed to work in water. We are a small company where I do most of the office work and sometimes drive loaders and excavators. Fredrik does the thinking and the execution and is the driver of the main excavator during restoration. He also monitors the work when we handle bigger jobs. Mikael Svensson does all the fish inventories (using electrofishing) and assists in removing threatened freshwater molluscs before work commences in the rivers. We have two more employees and Fredrik’s parents help us a lot.

Today we have a framework agreement with the County Administrative Board in Skåne and work closely together with them. We identify suitable projects, write restoration proposals, contact the landowners and, if they agree, we do the work with our own equipment. It’s always a voluntary agreement with the landowner. After the project we do follow–ups and, if needed, adjustments.

We meander rivers, restore habitats and hydrology, remove dams, create wetlands and create fish passages around obstacles such as dams or culverts. Sweden has a long history of canalization and the removal of blockages, such as boulders and stones, from rivers in order to make the water run faster and thereby make the old mills work more efficiently. The removed material is generally placed along the river bank where it destroys the bank-sides and the connection with the alluvial zone. When the mills become obsolete and disappear, the dams and sanitised rivers remain. After we remove dams the aquatic fauna can pass but we also need to restore their habitats to get the best possible result. In 2018, we removed nine obstacles above 1 metre high. 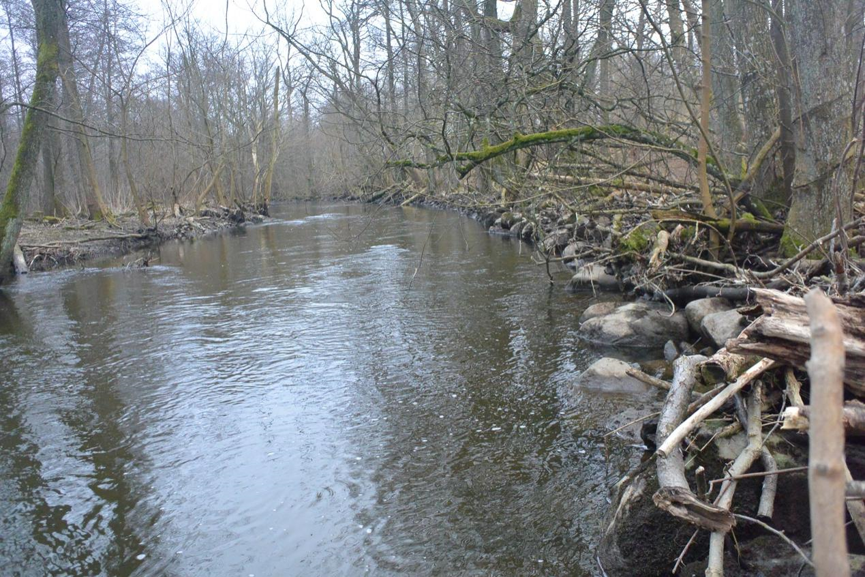 Before restoration: notice the laminar flow and how all major stones and boulders are lined up along the river bank. 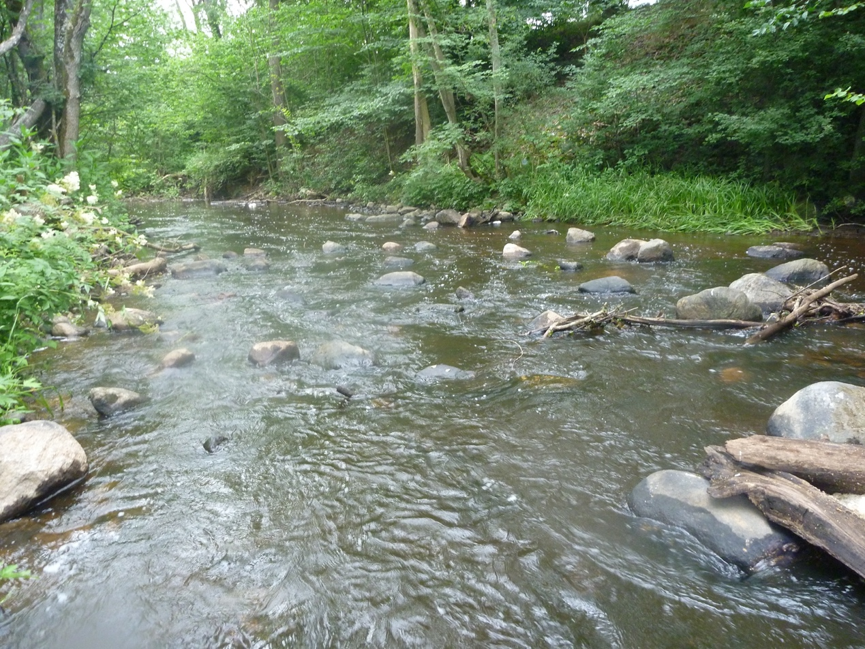 After restoration: notice the turbulent flow and how stones, boulders and large woody debris interact to create a wealth of small-scale in-stream habitats.

Many thanks to Andrea for this description of the company’s beginnings and the work it carries out.

One of the barriers that Fredrik’s and Andrea’s company removed in 2017 was the Klintarp Dam in southernmost Sweden.

The dam at Klintarp in the Klippan community of Skåne was situated on the Klöva creek which flows from the ridge of Söderåsen into the Rönne River. The creek is 17 km long. The dam was 4m long, 3m wide and 1.8m high and it carried an access road over the creek. There were two arches filled with reinforced concrete which impounded the river water.

The date of construction and who built it is unknown but the function of the dam was, at some point, to impound water for breeding and fishing for rainbow trout Oncorhynchus mykiss.

Since 2019, sections of the Rönne river have been covered by the EU LIFE project Life Connects. One of the aims is to make dams more environmentally-friendly, either through demolition or by creating fish passages. This is in accordance with the Water Framework Directive as well as Sweden’s national environmental objectives, especially that of ‘Flourishing lakes and streams’:

Lakes and watercourses must be ecologically sustainable and their variety of habitats must be preserved. Natural productive capacity, biological diversity, cultural heritage assets and the ecological and water-conserving function of the landscape must be preserved, at the same time as recreational assets are safeguarded.

More dams in the Klöva creek are listed for action as the creek has been important for migratory fish species in the past. Upstream of the Klintarp dam there is excellent habitat for juvenile salmonids and, before the dam was constructed, the creek was a good place for spawning trout and salmon in the lower parts. The creek is also a nursery area for eels. However, since the construction of the dam, there have been negative impacts on the fish species due to a poorly-constructed fish ladder which prohibited fishes from migrating past the dam. 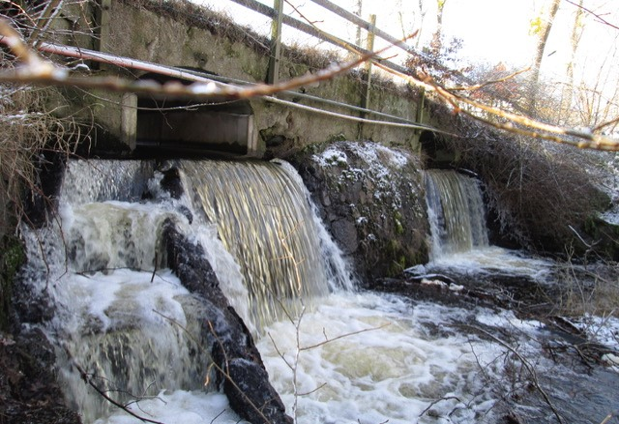 The Klintarp dam before removal of the barriers with the crude and completely malfunctioning fish ladder on the left.

An important incentive for removing the migration barrier at the Klintarp Dam was to increase the pressure for taking down the next dam 400m upstream. In Sweden, dams are most often removed in the order they occur beginning with the one that is most downstream: the second dam is often not removed until the first has gone. Consequently, removing the first dam increases the pressure to remove or modify the next dam. With both dams on the Klöva creek removed, there will be at least 2km of stream habitat opened up for migratory fish, including large areas of excellent spawning and nursery habitats for salmonids (at least 5,000m2).

The Klintarp Dam is privately-owned and, although it had been on a list of possible dams to be removed for a long time, it was not until 2016 that Fredrik and Andrea raised the suggestion to remove it, first to the landowner and then to the County Administrative Board. Fortunately, the landowner’s response was positive and a consent agreement between the County Administrative Board and Naturentreprenad Syd AB to remove the barriers was signed. The County Administrative Board is also responsible for matters according to the Heritage Conservation Act and an application was made for an environmental permit. The one environmental proviso that was specified was that the concrete barriers should be removed slowly and at the appropriate time of year during a period with low water flow.

The aim of the removal was to create free migration for all aquatic species including the target species of trout, eel and salmon. Before the removal, Andrea and Mikael carried out electrofishing downstream of the dam in order to collect data, an important step for monitoring the results of dam removal. With background data, Fredrik and Andrea can assess the impacts of the removal downstream of the dam site after sediment transport is over.

The total budget for the removal was 150,000 SEK (around 15,000 Euro) which was funded by the County Administrative Board.

In the autumn of 2017, the concrete barriers which had prevented fish movements up and down the creek were removed by Naturentreprenad Syd AB, Andrea and Fredrik’s company, on behalf of the County Administrative Board. 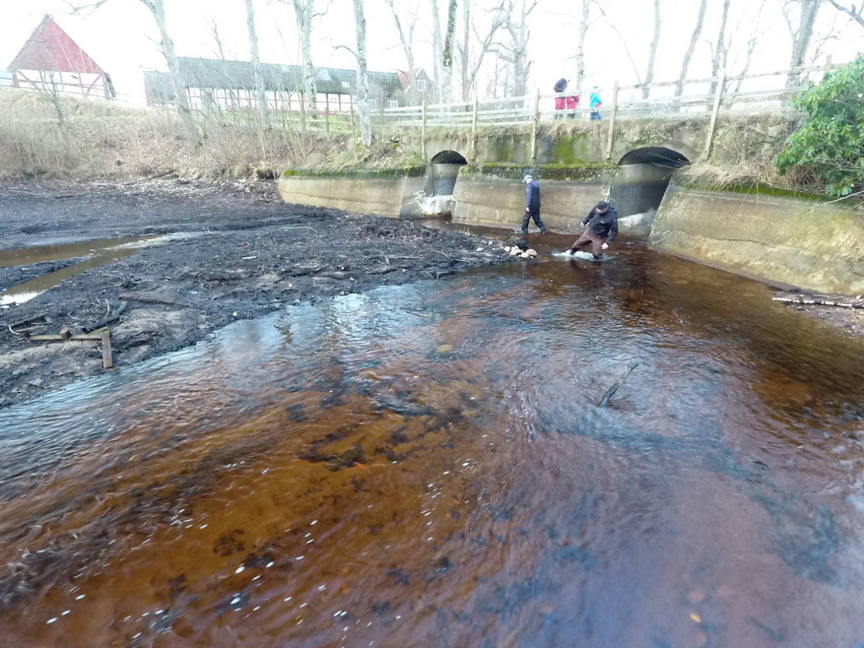 The dam from upstream with the impoundment emptied and the creek flowing freely. Fredrik and an employee are in the water assessing the progress of the work.

To avoid extensive sediment dispersion, only about 30cm a day was taken down from the top of the arches. Initially, hydraulic hammers mounted on an excavator were used. Hand held devices were then used to remove the concrete in the middle of the arches to keep vibrations to a minimum. Wastes were transported to an authorised dump. When all the old concrete had been removed, the inside of the bridge was re-lined to make it more aesthetically pleasing.

The removal took four weeks. Downstream of the dam, habitat restoration was carried out during the following summer. 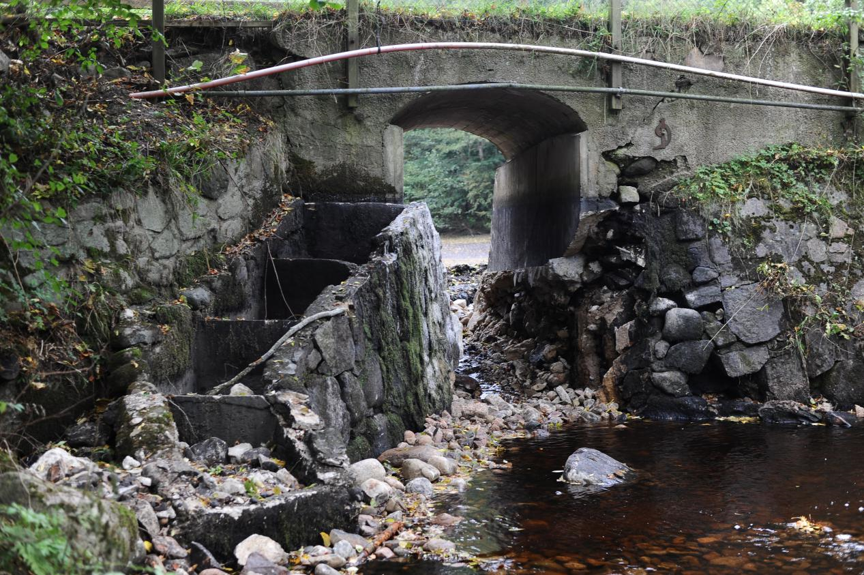 One of the arches after removal of the reinforced concrete barrier with the old, disconnected fish ladder on the left. 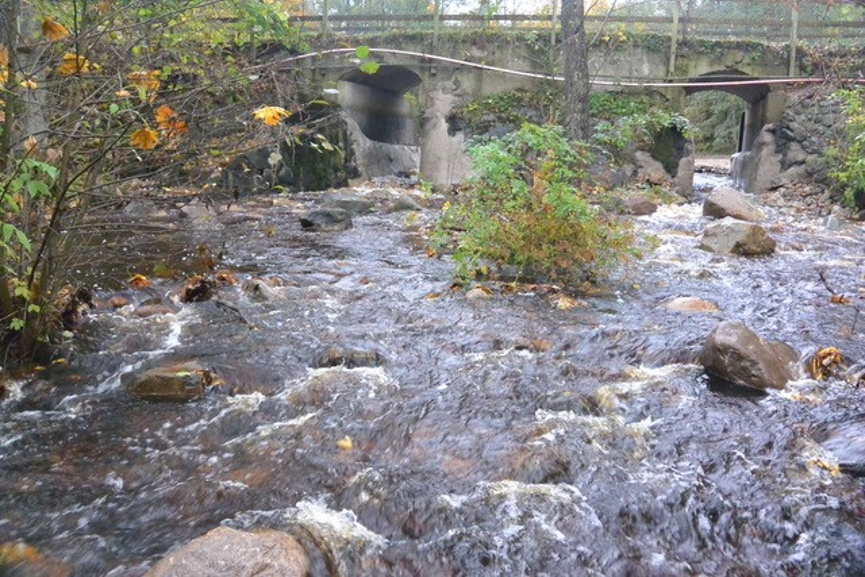 Restored habitat downstream of the dam.

After the barriers were removed, the creek returned to its original level. A small amount of sediment was transported downstream but no negative effects were seen. With the river water flowing freely again, small stones and gravel were carried downstream to become suitable habitat for spawning.

In the years following removal, Andrea, Fredrik and Mikael are monitoring the effects of their work by electrofishing, primarily for the target species trout, eel and salmon. They have already seen that removing these barriers has resulted in long-term positive effects: the number of juvenile trout, salmon and eels has increased; the areas suitable for spawning around the old dam site and downstream have got larger; and free migration is now possible.

There has also been a benefit for water management in the area as the old impoundment has become a small flood plain which spreads out and slows down any large amount of water flowing down from upstream after heavy rain. 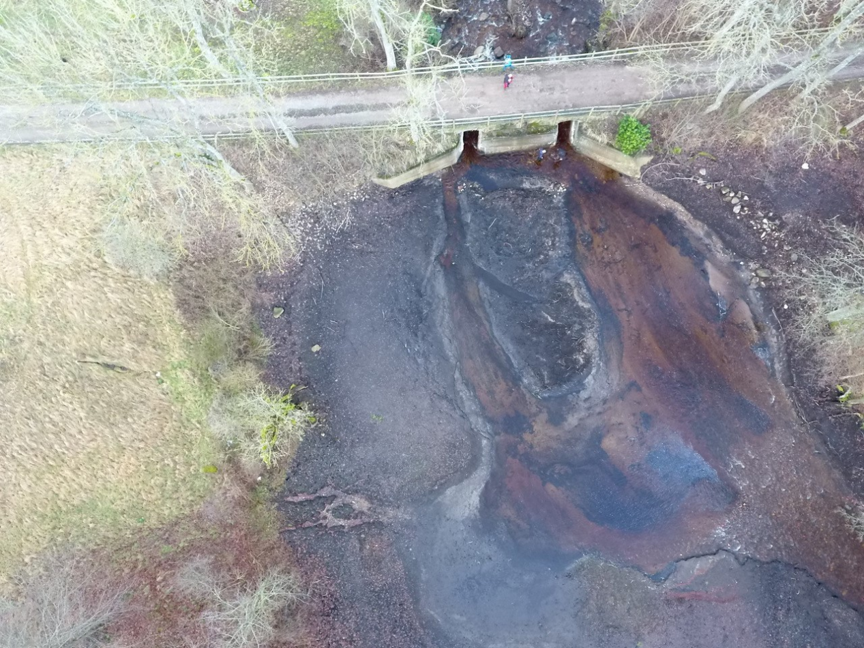 The old impoundment has become a small floodplain.

Due to Fredrik’s and Andrea’s hard work and commitment, their small company Naturentreprenad Syd AB has become a success and continues to remove dams and restore river habitats in southern Sweden. Their remarkable story is a model for other entrepreneurs who see the need to remove a dam and want to do it themselves.

With thanks to Andrea and Fredrik Lundblad for supplying information and photos of their work.

More information can be found at:

This website is in Swedish. You will need to use your browser’s translation facility to read it in another language.