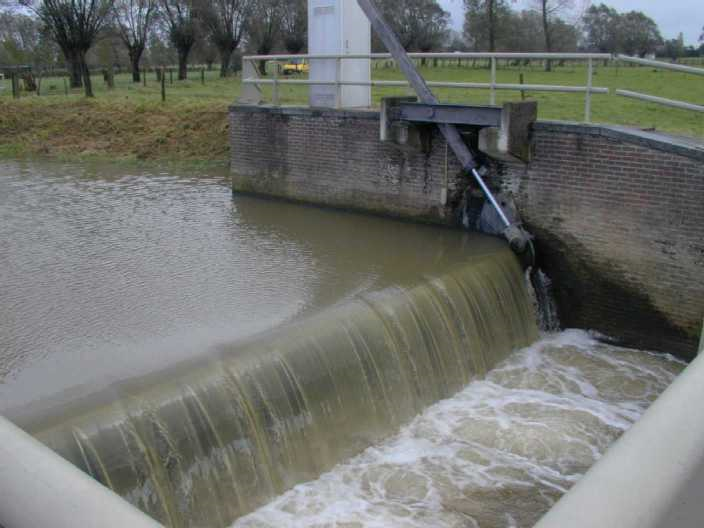 Flowing from Edingen to Deux-Acres in the Hainaut region of Belgium, the River Mark had great potential to be a favourable habitat for rheophilic fish species such as brook lamprey, common dace and chub. However, the construction of water mills and weirs along the river’s length caused conditions for migratory fishes to deteriorate and species had disappeared or were limited to isolated stretches. The removal of Weir No.1, the first weir found on the river from its confluence with the River Dender, has made fish migration into the Mark possible again.

The River Mark is 28 kms long, 19 kms of which is managed by the Flemish Environment Agency. It has been impacted by human activity since the Middle Ages when several water mills were built on the river. Later a series of automatic weirs were installed to regulate the water level and the meandering lower part of the Mark was straightened to improve drainage and flood control. This affected the free-flowing characteristics of the river: average flow rates were reduced; the composition of river bed material altered with the increase in finer sediments; and the sequence of pools and riffles disappeared. Not only did the habitat quality for rheophilic species deteriorate but fish migration became impossible.

Weir No.1 was built at the beginning of the 1980s by Landelijke Waterdienst (the previous water management company) to control the upstream water level. The weir was electrically-powered with a metal valve contained within a concrete barrier nine meters long which caused a height difference of two meters between the upstream and downstream water levels. The length of river negatively affected by the barrier was two kilometres to the next weir upstream.

Large areas of the Mark valley are now part of the Natura 2000 network but fulfilling the goals of the EU Habitats Directive, the Water Framework Directive and the Benelux decision on free fish migration (M(2009)01) was made more difficult by the presence of Weir 1. The River Mark had already been identified as a priority watercourse because of its importance for species such as eels and bullheads and, during a preparatory study for the weir removal project, a relict population of common dace was found. This was a species that had become very rare in the Dender sub-basin, and the discovery highlighted the importance of the Mark for the recovery of this species on a regional scale. Fishery research also discovered, unsurprisingly, that species diversity and abundance decreased upstream of each barrier.

The decision to remove Weir No. 1 was driven mainly by the commitment of the Benelux countries of Belgium, the Netherlands and Luxembourg to remove fish migration barriers. Many of the meanders which had previously been cut off were still present along the River Mark and it was decided that, instead of building a fish passage to bypass the weir, it would be better to remove it completely and restore the meanders to their historic condition. The aim of removal was, therefore, twofold: to allow fish migration and to restore the riverine habitat.

The decision-making authorities for this removal were the Flanders Environment Agency (VMM) and the Agency for Nature Conservation.

The plans were discussed by stakeholders such as the municipal authorities, the local nature organisation and the Flemish Agency for Nature and Forestry, and consultations took place with the adjacent landowners, who were mainly farmers, as changes in water levels would occur after the removal. There were also environmental specifications for the works. These concerned the digging out and reinstatement of meanders to their original dimensions in order to restore the free-flowing conditions that had previously existed. Finally, a building permit was granted for the removal itself. 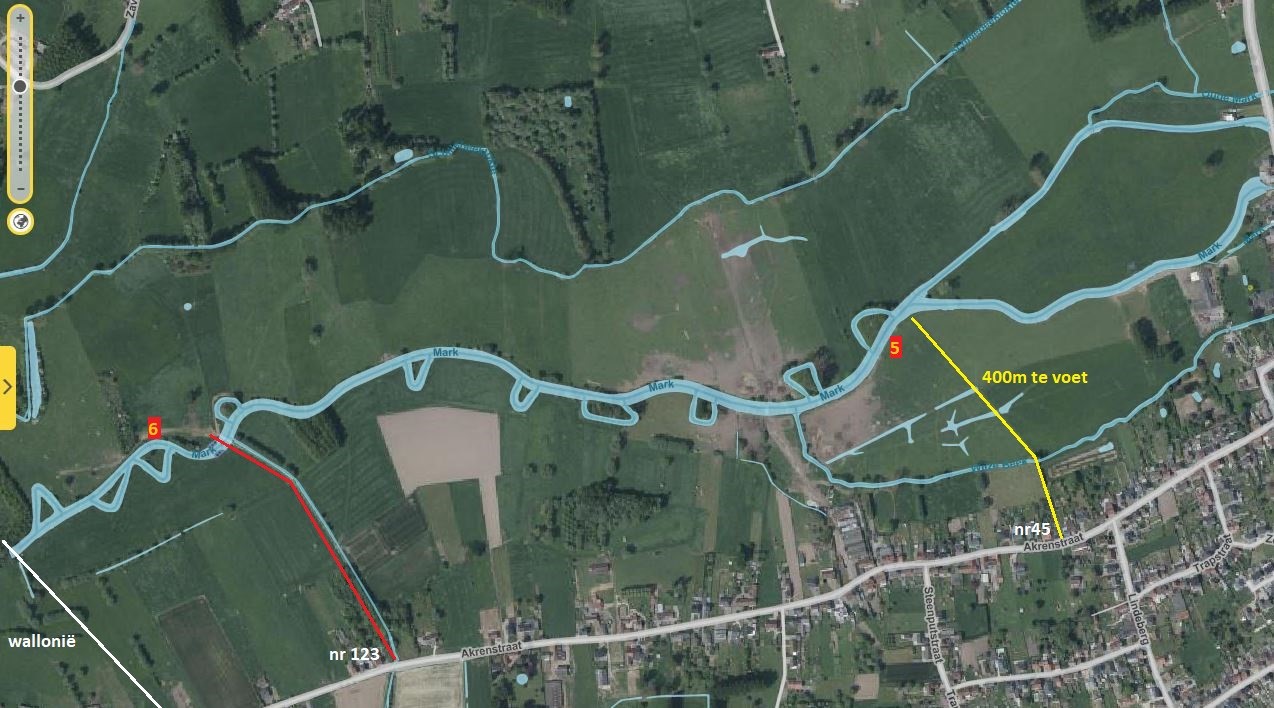 Aerial photo diagram showing the locations of the reconnected and new meanders.

Before restoration works started, the fish community was monitored. In the River Mark, downstream of the town of Galmaarden, nineteen species of fish were caught, including 92 European bitterling and 572 common dace. The number of species and individuals decreased noticeably further upstream.

The removal of the weir was part of a restoration project in which three barriers to fish migration were made passable and cut-off meanders were reconnected. The total cost of the project was around 400,000 Euros. The funds came from the Flemish Government, and the Interreg Project of the European Union which aims to support co-operation across borders by project funding.

After ten years of planning, the weir was easily removed in 2012. First, it was put into its lowest position to allow upstream water levels to drop. Following this, connections to the cut-off meanders were dug out to increase the overall length of the river and to restore the river’s original slope and length profile. After several years, the metal valve of the weir was removed.

The Flanders Environment Agency and the watercourse manager were directly responsible for the removal. 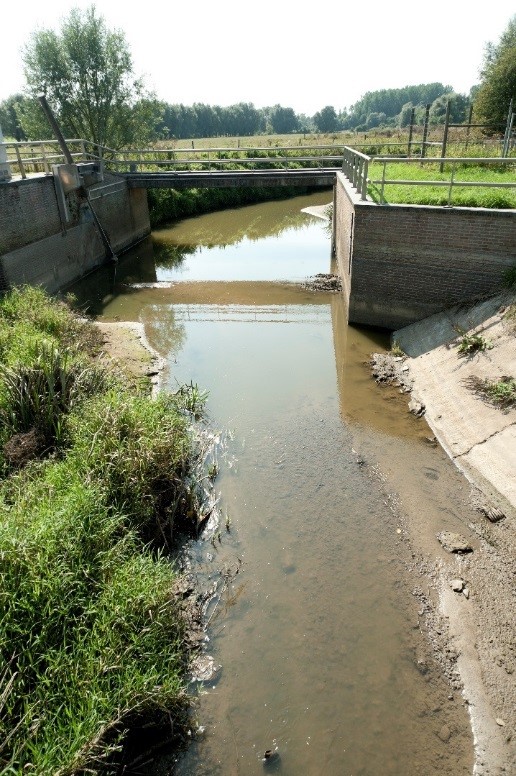 The River Mark flows freely after removal of the weir.

With the weir gone, the water level just upstream of the old weir dropped by two meters. This was compensated for by reconnecting six meanders upstream of the weir site. Three meanders downstream were also reconnected. After a few years, the straightened parts of the river between the reconnected meanders started to silt up resulting in a narrower river bed. The river now has a more natural slope and cross-section with higher average flow rates and flow diversity. 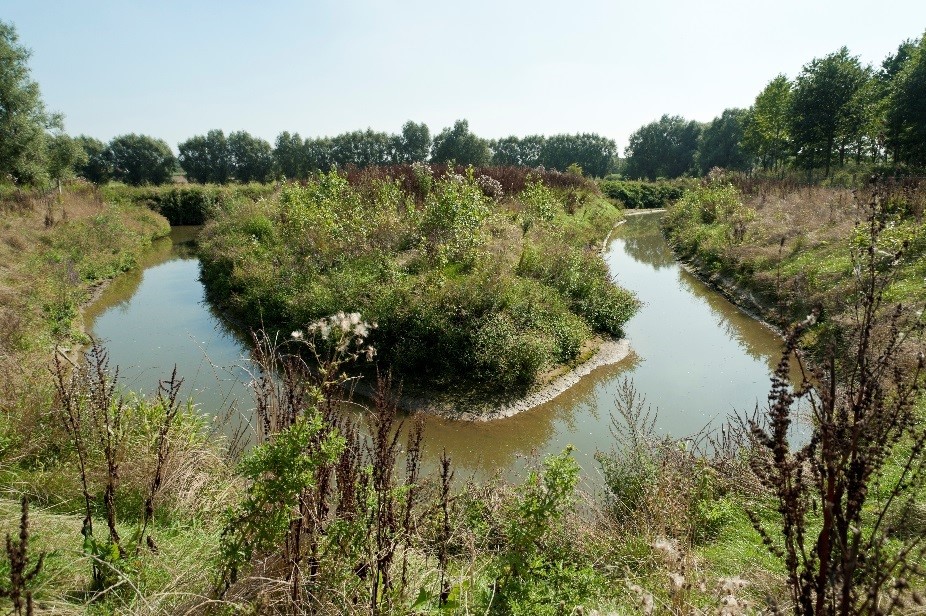 Several years after completion, the project was evaluated using electro-fishing and habitat quality assessment and a report was produced. The main document is in Dutch (see link below) but the authors have provided this summary in English:

In this study, restoration measures in the Belgian lowland River Marke (Flanders) were evaluated. Measures that were undertaken by the Flemish Environment Agency (VMM) included re‐meandering, weir removal, the building of a pool and weir fish pass and the creation of a long nature‐like bypass channel. In total, 5 historic meanders were re‐connected and 5 new meanders were dug in the lower reach of the river. At base flow the river discharge is forced into the meanders by small artificial weirs that were raised and located in the main river just downstream of the upstream entrance of the meanders. At high flow water flows over the small artificial weirs in the main river. Habitat requirements of fish vary greatly depending on the species, the life stage or the time of year. Free migration between different habitats is necessary to preserve diverse fish populations. Many constructions in streams and rivers hinder or impede free fish migration.

We evaluated the habitat structures and conditions in the restored study area (2014 post‐evaluation study) after a pre‐evaluation study was carried out in 2010 before any measures were taken (Buysse et al., 2011 – see link below). Flow velocity, depth and substrate on the same trajectories were compared between 2010 and 2014. Habitat suitability was evaluated for rheophilic species like dace (Leuciscus leuciscus) and brook lamprey (Lampetra planeri).

The restoration measures clearly had a positive effect on at least two important physical characteristics of the river. Through the weir removal and re‐meandering there was a distinct increase of flow velocity at base flow and more shallow habitats were created. This led to zones with higher and more diverse flow velocity which will lead to higher habitat suitability.

Since the restoration measures have been carried out relatively recently, changes in substrate composition and substrate types are still limited. Nevertheless, on some locations hard substrates like fine and coarse gravel were observed. Moreover, some natural and artificial riffles were formed respectively in meanders or at meander in‐ and outflows.

It can be concluded that after implementation of the restoration measures habitat suitability has improved for rheophilic species. This can be explained by the preference of these species for higher flow velocity, shallow habitats and gravel. In most Flemish lowland rivers hard substrate types (stones, fine and coarse gravel) are scarce. In the river stretches and/or meanders where some gravel has surfaced, the river managers could consider creating larger riffles as extra habitat by adding fine/coarse gravel and smaller stones.

There are other automatic weirs in the River Mark, upstream of the removed weir, which cannot be easily removed. In most cases, they are attached to watermills which are of great historical and cultural value. Fish migration is made possible (or will be in the future) by creating bypasses, either starting a long way away from the weirs without any v-shaped overfalls, or beginning nearer the weirs with v-shaped overfalls.

There were some groups of people that were unhappy with the lower level of the water in the immediate proximity of the weir, for example, because the possibilities for fishing were less or were changed. Before the removal, there was almost standing water just above the weir, very similar to a fishing pond, and you could find fishermen there. After removal, the fishermen moved to other places above the next weir upstream. So I think they were not happy with the low water level, the increase in flow velocity and the creation of more shallow habitats which were all clearly noticeable. Maybe another type of fishery could be a solution.

The effects on agricultural activities beside the river just upstream of the removed weir have not been studied. Before the removal, the grasslands were very wet for most of the year: we have often seen cows with their legs half-covered in the mud. That will not be the case now but it is possible that the grasslands may become too dry during summertime.

In spite of the constraints placed on the removal of the other weirs, the long-term effects of the removal of weir No.1 have been positive for fish species, river morphology and water management. Fishes are now able to migrate from the River Dender into the River Mark and there is a significant improvement in habitat quality for rheophilic fishes and other riparian species. For the local human population, landscape quality has improved and a more robust river system means better water retention and flood control.

With many thanks to Ronny De Keer and Maarten Van Aert, ecologists at VMM, Operational Water Management Department of the Flanders Environment Agency, for providing information and photos.

This document is in Dutch.

Evaluation of river restoration measures in the Marke (Dender basin)

This document is in Dutch.